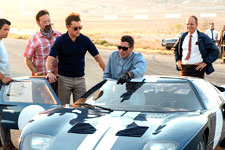 Punarvasu Pendse / fullhyd.com
EDITOR RATING
8.0
Performances
Script
Music/Soundtrack
Visuals
7.0
7.0
8.0
9.0
Suggestions
Can watch again
Yes
Good for kids
Yes
Good for dates
Yes
Wait to rent it
No
Mirrors
Football is the sport of choice of yours truly. The action is constant, the tempo furious, and the excitement unwavering. Test cricket and its ebbs and flows test the patience of this reviewer, and are well nigh unwatchable. Needless to say, 24-hour motor racing (or racing movies, for that matter) does not rank very high on the list of favourites.

The Steering Wheel
Director James Mangold's follow-up the much-loved Logan is also as heavy on the emotional front as its predecessor, despite its similarly heavy focus on action. We're not mere audience here, but the passengers of Mangold's skillfully-driven vehicle.

The Chassis
The post-war prosperity of the '60s hadn't quite made it to the bottom line of the Ford Motor Company, prompting Henry Ford II (Tracy Letts) to demand ideas from his execs. The proposal of Vice President Lee Iacocca (Jon Bernthal) to acquire the ailing Ferrari is met with skepticism, but he is allowed to proceed. Enzo Ferrari (Remo Girone), however, has other plans, and a chastized Iacocca returns to Ford with the news that Ferrari had been acquired by Fiat - who allowed Enzo full control of Scuderia Ferrari, its racing division, as opposed to the 90/10 split Ford was offering - and that the Italian had some choice words for Ford.

Humiliated and angered, "The Deuce" vows to build a car that would take over Ferrari's dominance at the 24-hour Le Mans motor race in France. Enter one Carroll Shelby (Matt Damon), who had previously won the Le Mans before a condition forced his retirement, and now sells cars and manages racing drivers. With approval from Ford himself, Shelby recruits a crack team to create a sports car that will challenge Ferrari, including the eccentric Englishman Ken Miles (Christian Bale), a fiery race driver and fresh-out-of-business mechanic. The duo battle corporate red-tape and the limits of physics in an ambitious bid to win the Le Mans race that no American car (leave alone a Ford, who had no prior experience in racing) has ever done before.

The Engine
Ford v Ferrari is very loud - every action is pronounced, every corner swerved, and every tense moment felt. Plenty of long racing sequences, filmed with the utmost authenticity, make you feel about as close to the tarmac as you can get. Despite its two-and-a-half hour runtime, the movie's story moves along at a breakneck pace, not quite unlike the machines it so lovingly portrays.

But make no mistake, despite the slick racing action, the reason Ford v Ferrari (titled Le Mans '66 in some places) works so well is its conventional but very lively human drama. Backed by a plethora of entertaining, and somewhat animated, characters, this is the kind of classic old-school filmmaking Scorcese laments Hollywood doesn't possess anymore. It is essentially the tale of the underdog (though the underdog is a billion-dollar company), and it is remarkably human. You don't need to love racing or cars to appreciate the friendship between two incredibly talented people who battle all odds to fulfill their common passion.

And then there's the scope of it all, which serves to humble the viewer. The sense that despite everything they've accomplished, Shelby and Miles are just pawns for a marketing team, where the giant board is corporate culture. The overwhelming realisation that at the end of the day, the sole reason Ford wanted a photo finish was to sell more cars.

But this kind of retro storytelling comes at a price - the supporting cast are but means to an end. Mollie Miles (Caitriona Balfe) gets the worst deal of the lot as Ken's stereotypical "the good wife", as exemplified in one scene where she looks on, supportively letting the men deal with their issues in the most proper of ways - engaging in fisticuffs.

The Wheels
Matt Damon plays the suave charmer yet again, this time a craftsman who is true to his passion. It is Christian Bale as the maverick Ken Miles who steals the show here, though, with his greasy look and slightly over-the-top act (but he reins it in when needed - masterful work). The supporting cast is great, but the focus is squarely on the duo. Josh Lucas as the smarmy Ford executive, and Noah Jupe as Miles' cheerful son are the couple of standout performances, as is with Bernthal's Mad Men-esque portrayal of Iacocca.

The Exhaust
Ford v Ferrari is loud, as we talked about earlier. Marco Beltrami has worked with Mangold before, and delivers an able soundtrack that adds to the already pulsating atmosphere that the film creates. The Sonic's "Have Love Will Travel" is the kind of music we're talking about, so there.

The Road Ahead
If there's any movie we have seen in a long time that deserves to be seen on the big screen, it is this one. For a film that promises a rolicking good time, the movie has you reflecting upon the futility of it all, by the end - yet it is never not fun. 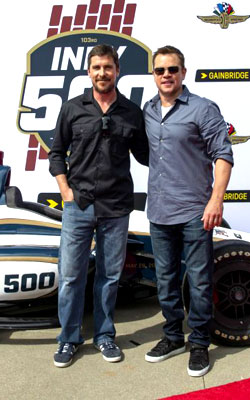 ADVERTISEMENT
This page was tagged for
Ford v ferrari fullhyd
Ford v Ferrari english movie
Ford v Ferrari reviews
release date
Matt Damon, Christian Bale
Follow @fullhyderabad
Follow fullhyd.com on
About Hyderabad
The Hyderabad Community
Improve fullhyd.com
More
Our Other Local Guides
Our other sites
© Copyright 1999-2009 LRR Technologies (Hyderabad), Pvt Ltd. All rights reserved. fullhyd, fullhyderabad, Welcome To The Neighbourhood are trademarks of LRR Technologies (Hyderabad) Pvt Ltd. The textual, graphic, audio and audiovisual material in this site is protected by copyright law. You may not copy, distribute, or use this material except as necessary for your personal, non-commercial use. Any trademarks are the properties of their respective owners. More on Hyderabad, India. Jobs in Hyderabad.