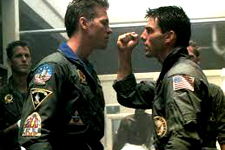 There are two ways to look at any situation offered up by life: glass half-empty and glass half-full. Likewise, there are two distinct perspectives of looking at 1986's Top Gun. The first would be a gay romance masquerading as a military recruitment tool. The second point of view would be a military recruitment tool masquerading as a gay romance. The original Top Gun is a perfect example of a hilarious, cornball '80s military action film whose ethos could is "AMERICA!!! F*CK YEAH!!!"

With over 30 years between the original and its sequel, the question of Top Gun: Maverick's fate becomes two-fold as well: "Will this sequel be a fun throwback to times gone by, or will it be a cynical cash grab that capitalizes on IP from times gone by?"

The answer to that question depends on how you choose to view the newest Tom Cruise vehicle. You could watch it as a middle-of-the-road movie about the military or as a kickass sports movie about a grizzled coach and his unruly band of players. Our suggestion of the second option isn't without its merit as the film's structure resembles a sports drama in more ways than one. Also, the film can't single out and address any nation as the "bad guy" based on how delicate geopolitics are these days.

The movie begins as our grizzled old coach Capt. Pete "Maverick" Mitchell (Tom Cruise) finds himself in hot water by flying and destroying a multi-million-dollar US fighter jet. He averts a dishonorable discharge with Tom "Iceman" Kazansky recommending him for a teaching role at Top Gun. A crew of the best fighter jet pilots assembles at Top Gun to craft a plan to destroy an enemy uranium enrichment base before it becomes operational. Maverick trains this ragtag band of one-note soldiers into becoming a team and accomplishing their mission.

The strength of Top Gun: Maverick is not in its originality. The film has a time-tested story with well-worn themes and instantly recognizable characters.

The fuel in its engine comes in the form of some excellent set-piece filmmaking. The script chooses not to drown itself in jargon but simplifies the goals of every scene and lets it play out in a way every man, woman and child in the audience can understand. This method of etching a sequence pays off in another facet as well. While engaging with coherent action, the audience can spare some time for the emotional hook of every scene.

These set-pieces are some of the most incredibly conceived and executed aerial dogfights in film. The blend of CGI and actual aerial stuntwork filmed on camera is an absolute treat. There is an earnest effort associated with every action scene. After a whole host of big-budget duds, this Hollywood action extravaganza film acts as the exclamation point to our Tollywood slang, "Paisa Vasool!" In simpler terms, it is bang for your buck, no more and no less.

However, glossy repackaging of something familiar and leaving the audience with a feeling of satisfaction doesn't automatically absolve the movie of all its sins. When the film is content with being good and covering all quadrants, it rarely reaches for anything out of its comfort zone in a narrative sense. While the characters and their aircraft seem to be mirroring the tale of Icarus by performing feats of sheer hubris, their characterizations never really soar as high. When the most memorable thing about your characters is their cool callsigns, we have a problem.

A whole host of characters and their arcs seem plateaued as the scenes written to help us understand them better lack inspiration. Their quarrels seem trivial, their demons are hackneyed, and their cathartic moments are easy on the eye but don't weigh on your heart.

The previous paragraph isn't critiquing the actors essaying these roles. Their mission in the film requires them to fly under the radar for an extended period to avoid enemy missiles. And in real life, their acting is solid enough to keep them under the radar of heavy criticism. If anything, Tom Cruise still deserves high praise for pushing himself to the limit to deliver excellent blockbuster entertainment year on year. Cruise may be the last remnant of star-driven action spectacles where the star cares about his craft more than his bottom line.

The aura of Tom Cruise looms so large over the screen that I almost forgot that the freshly-minted score for the film is quite bland and uninspired. The only aspect of the original this movie doesn't improve on is the soundscape. Dangerzone remains excellent with its cheesy goodness, and the '80s sound cues heralding every new set-piece are as brilliant as ever.

And that might be what keeps Top Gun: Maverick from being a throwback for years to come. For all its merits when compared with its predecessor, it lacks the awkward charm associated with the latter. The original Top Gun is loved by generation upon generation because it morphs into something new for every generation that runs into it. In its original form, it was a sweet '80s action film. As time went on, audiences began dissecting the film and infusing its narrative with new meaning based on the aspects of its making that aged poorly with time. This new venture lacks those bouts of memorable cheese and hysterical cringe. Time will tell if this movie has staying power, but at the present moment, it sure is a fun ride at your local cinema.
Share. Save. Connect.
Tweet
TOP GUN: MAVERICK SNAPSHOT 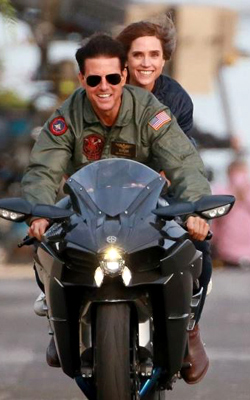 ADVERTISEMENT
This page was tagged for
Top Gun: Maverick english movie
Top Gun: Maverick reviews
release date
Tom Cruise, Miles Teller
theatres list
Follow @fullhyderabad
Follow fullhyd.com on
About Hyderabad
The Hyderabad Community
Improve fullhyd.com
More
Our Other Local Guides
Our other sites
© Copyright 1999-2009 LRR Technologies (Hyderabad), Pvt Ltd. All rights reserved. fullhyd, fullhyderabad, Welcome To The Neighbourhood are trademarks of LRR Technologies (Hyderabad) Pvt Ltd. The textual, graphic, audio and audiovisual material in this site is protected by copyright law. You may not copy, distribute, or use this material except as necessary for your personal, non-commercial use. Any trademarks are the properties of their respective owners. More on Hyderabad, India. Jobs in Hyderabad.