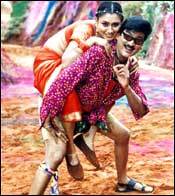 EDITOR RATING
3.0
Performances
Script
Music/Soundtrack
Visuals
NA
NA
NA
NA
Suggestions
Can watch again
NA
Good for kids
NA
Good for dates
NA
Wait to rent it
NA
Apparao (Rajendra Prasad) runs a driving school where he teaches only ladies. He starts by gently caressing his student's soft palms and then slowly sliding his hands over her silky-smooth forearms until he reaches her shoulders. Then he moves his lips close to hers, all the while breathing down hotly upon her neck and nibbling her earlobes, sending shivers of pleasure down her spine. His hands are now on her waist and her hips, and are starting to move towards the top of her body, delicately undressing her. For the rest of the lesson, you have to see the songs.

The student in question is Preeti Jhangiani, who challenges her friends' claim that Apparao is quite professional, and says she'll seduce him even if it's the only thing she has to do in all the double-entendre ridden film. But Apparao has the brakes firmly on his axle (heh, heh), and won't rev his engine despite all her attempts to steer his gear rod into position (wooooo hoooo!!!). This makes her gain respect for him, and she falls in love with him. Between you and us, though, we secretly think it was just because the script demanded it.

But learning that the rule 1 + 1 = 2 applies to women's navels too, Apparao has already agreed to marry Malavika. The marriage is scheduled in a week, and as you brace yourself for another of the one-husband-two-wives morbidities, you are convinced nothing can save this movie from surefire disaster anymore.

When you least expect it, every once in a while comes a performance in a film that resurrects a confirmed disaster, that single-handedly delivers full value for your money, that adds a star to the rating all by itself. Unfortunately, this movie has no such performance. Jaya Prakash Reddy is just an incompetent faction leader who will do anything for his daughter, including putting on 212kg in weight by eating all the food she doesn't.

He convinces Apparao to romance his daughter simultaneously along with his wife (Apparao's wife, that is), since his daughter has cancer and will live only for 4 months. Just as you are thinking that that is an awfully long time for the film to end, comes the news that Preeti doesn't have cancer after all.

Apparao is now in a fix since a) he can't romance 2 women indefinitely, b) he can't dump Preeti and incur the warlord's wrath, and c) the film shows no signs of ending before the next showtime. But soon comes the news again that Preeti indeed has cancer. All the women and the sentimental lot in the theater are praying now, and their prayers are answered - she dies and the movie ends.

There was a time when Rajendra Prasad meant wholesome entertainment. Now you see a man who tries to romance women half his age, a third his weight and with a fourth of his own make-up on, using vulgarly picturized songs and crude jokes to please front-benchers (and, from what we read, himself). The script is like Calvin Ball - it's made up as it goes along, and is just as arbitrary. The women are there for a purpose, and deliver. Brahmanandam and M S Narayana feature in insulting parts, and nobody knows what Suman is doing in the bit role.

The film does have a few moments of entertainment, and there are six round-the-world trips to be won for the smart viewers correctly identifying them.
Share. Save. Connect.
Tweet
APPARAO DRIVING SCHOOL SNAPSHOT

ADVERTISEMENT
This page was tagged for
Rajendra prasad apparao driving school full movie
driving school film
Apparao Driving School telugu movie
Apparao Driving School reviews
release date
Follow @fullhyderabad
Follow fullhyd.com on
About Hyderabad
The Hyderabad Community
Improve fullhyd.com
More
Our Other Local Guides
Our other sites
© Copyright 1999-2009 LRR Technologies (Hyderabad), Pvt Ltd. All rights reserved. fullhyd, fullhyderabad, Welcome To The Neighbourhood are trademarks of LRR Technologies (Hyderabad) Pvt Ltd. The textual, graphic, audio and audiovisual material in this site is protected by copyright law. You may not copy, distribute, or use this material except as necessary for your personal, non-commercial use. Any trademarks are the properties of their respective owners. More on Hyderabad, India. Jobs in Hyderabad.