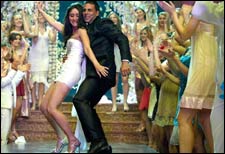 EDITOR RATING
3.5
Performances
Script
Music/Soundtrack
Visuals
6.5
2.5
7.0
7.5
Suggestions
Can watch again
No
Good for kids
No
Good for dates
Yes
Wait to rent it
Yes
Viraj (Akshay Kumar) is a top stuntman in Hollywood who routinely sets fire to large expensive stuff, audaciously makes away from the scene of action, and gets paid well for it - just like a typical Indian politician. He also uses women as objects of pleasure, sleeping with them at will and dumping them the moment they talk of marriage - his logic is that if he refuses to marry a woman then she will marry someone else, and so the more the number of women he refuses to marry, the more the number of additional marriages, and therefore happiness, in the world.

Okay, so he's actually a misogynist, a fact you discover when he bursts upon the secret wedding of his brother Lucky (Aftab) to Kamini (Amrita Arora), and lambasts Lucky for ruining his life by letting a woman now control him. Just when several men in the audience are starting to nod approvingly, in walks a fiery Simrita (Kareena Kapoor), yelling similarly at her sister Kamini on how she's letting a man who can think of nothing but her figure, ruin her life. The several men in the audience are not nodding approvingly anymore, since they think Lucky is a cool guy, since they think men consider women as much more than mere figures, and mostly since they are too busy staring at Simrita's legs and chest.

Viraj and Simrita hate each other's guts now, and lose no opportunity to swear at each other. Simrita gets Kamini to starve her husband Lucky sexually to prove his genuine love for his wife, and Viraj plans a trick to get Kamini into Lucky's bed. Several men in the audience are praying for their success, and even promise their favourite gods to give up all sexual thoughts for 1 hour, or at least for upto 30 seconds, if Lucky gets lucky.

However it ends up as a fiasco with Kamini catching Lucky with his pants down in a nightclub toilet with a clinging woman, and filing for divorce. The several men in the audience think she's being too harsh on him: it's not humanly possible for a man to not get caught 100% of the times - divorcing him because he got caught just once, without giving him credit for all the times he may have done it without getting caught, is downright inhuman. The several men are also, however, secretly happy that they now don't have to honour their offer to the Almighty, even if they will never admit it (it's a guy thing).

Anyway, sorry for the mess he's got his kid brother into, Viraj loses focus and gets into an accident. He lands in a hospital where who should operate on him but Simrita, a novice surgeon. Unfortunately, Simrita forgets her chiming watch in his stomach before sewing it up. Nobody likes his stomach chiming every hour, however organized he likes to be - plus, there are some eatables that perish very quickly with time, and a watch ticking right next to them in the stomach can make them get spoilt even faster.

Simrita finds out what's happened when she sees the X-ray of Virij's stomach, and gets desperate - the watch is quite expensive. And actually so is her degree, which can get revoked - surgeons are not permitted to store objects in patients' bodies, even if they are good friends. And while Simrita hates Viraj's guts, putting a watch in them is taking things too far. She realizes that there's only way to remedy the situation - make him fall in love with her and then trick him into another surgery.

Kambakhht Ishq is a copy of a Telugu (dubbed from Tamil) film Brahmachari that itself did not set the screens on fire in the first place. What the Hindi version does is make it an Akshay Kumar movie - viz. remove any traces of depth or creativity, put in an au courant heroine who shows a lot of skin, force comedy in, and generally take twice the time needed to narrate a story.

Most of the meagre comedy in Kambakhht Ishq mocks your intelligence (think someone farting right in Amrita Arora's face), and the rest of the movie succeeds where the comedy fails to do this. The film appears to lack in flow and in consistency in the lead characters, and for most of the first half, nothing seems to be happening anyway. Songs pop in incoherently, there's a random Italy trip that seems to do nothing for the movie's progress, Denise Richards is completely inexplicably in love with a stuntman, and when the main pair get together for vested interests, you don't understand how it happens so seamlessly.

Completely lacking in a compelling script or even screenplay, the movie then relies entirely on star power for its crutches. Only, even Akshay Kumar, lacking remarkably in energy levels or intensity for someone his star status, cannot save a dud like this, and while Kareena does all her preening, pouting and exposing, she is given a role that makes audiences despise her character too much. Denise Richards is completely shoehorned into the film, and her character results in one of the most insensitive climaxes in a Bollywood film. And Sly Stallone has a fight that doesn't improve your life in any way.

Kambakhht Ishq looks opulent, of course, and that is perhaps the only saving grace. Unless you find Kareena or Akshay as ends in themselves. Luckily, the remedy for that is now playing in a theatre close to you.
Share. Save. Connect.
Tweet
KAMBAKKHT ISHQ SNAPSHOT

RATING
4
AamchiHyd on 7th Jul 2009, 8:19am | Permalink
Akshay has made it a habit to wallow in crap like this one and Chandni Chowk to China. Its a wonder how 'original' works such as this are greenlit and bankrolled in the first place. Having said that, stars have acted in bad movies before, but it takes the panache of an Amitabh or a Chiranjeevi, or even a Kamal Hassan or a Rajanikanth. But taking the basics for granted is surely folly, and knowing that there was absolutely no thought put into this attempt at entertaining is so offensive, that one can only hope such attempts are met by refusal at the box office. Else, there will be no lessons to be learnt, and regurgitated trash like this will continue to plague the global audiences.


Pros: None
Cons: Everything, other than the parameters above, shoddy production values, shoddy stunts, lack of editing

RATING
1
Martin Eksath on 5th Jul 2009, 9:15pm | Permalink
I agreeperfectly with the editorial review. Not much of a script and not a movie to remember, but sometimes entertaining for the time being

ADVERTISEMENT
This page was tagged for
Kambakkht Ishq hindi movie
Kambakkht Ishq reviews
release date
Akshay Kumar, Kareena Kapoor
theatres list
Follow @fullhyderabad
Follow fullhyd.com on
About Hyderabad
The Hyderabad Community
Improve fullhyd.com
More
Our Other Local Guides
Our other sites
© Copyright 1999-2009 LRR Technologies (Hyderabad), Pvt Ltd. All rights reserved. fullhyd, fullhyderabad, Welcome To The Neighbourhood are trademarks of LRR Technologies (Hyderabad) Pvt Ltd. The textual, graphic, audio and audiovisual material in this site is protected by copyright law. You may not copy, distribute, or use this material except as necessary for your personal, non-commercial use. Any trademarks are the properties of their respective owners. More on Hyderabad, India. Jobs in Hyderabad.