You utter your prayers before the show begins - and they are answered, even if only partially! While you are spared from the usual Telugu cinema evils, you end up with the usual daily cinema. Ninne Ishtapaddanu is nice, but in a very conventional and seen-it- all kind of way.

You will need X-ray vision to understand the story of this one. This is not a love triangle, but a love tangent. Boy goes around girl and chases her until he comes full circle. Then he ditches her to take off on a tangent with another. See, it pays to learn some math and simple geometry.

Charan or Cherry (Tarun) is a nice guy with flaws. He plays a prank on the loud and proud Sanjana (Anita). He chases, she grimaces. He pursues her, she eschews him. Thirty minutes and two duets later, he thinks he loves her. But alas, she loves him not. This part is all so predictable, nevertheless very sweet. Cherry and his best friend (Ali) are up to some pranks that leave you in splits.

It's chutti time at college. He pines for her, she whines for him. But when he proposes, she opposes. In no uncertain terms she tells him that she thinks he is an idiot, and gives him three reasons for that, ending by telling him that the whole love affair was a big joke on him. After a highjinks, 'here, this is the invite for my wedding', it's the break for the intermission. This part of the feature film was inspired by Neekosam Nenu, Naaku Nuvvu Vunnavu, Nuvvante Naaku Navvu, Nuvvu Naaku Kaavali Now, and others.

Cherry decides to pay her back in the same coin by screwing up her wedding with an NRI bloke (Rajeev). He befriends this poor sod who is all set to marry the arrogant Sanju. Now this part of the feature film was inspired by My Best Friend's Wedding, Meri Yaar Ki Shaadi Hai, Kuch Kuch Hota Hai and others. The only diversion here is that Cherry lands up at the house of a sweet, innocent girl (Geetanjali) while in hot pursuit of Sanju. Now Gita loves him, but alas, he loves her not.

After much chagrin and hungama at Sanju's house, the NRI groom is called off and her Dad asks Cherry to wed his daughter. Cherry now turns around because he is already in love with the sweet girl, and this drama was just to teach Sanju a lesson. Cherry takes off with his tangential love Gita, a compere in All India Radio, to live happily ever after.

The main plot per se has nothing to interest us. But it's the little funny incidents and those eccentric characters - a weird and stuck up Babu at Akashvani, an over-the-top average traveler, a census officer, a Chiru fan etc. - that actually make up for some hilarious scenes.

Tarun is a winner and makes up for his lack of height and physique merely by his turning his charm full blast. His comic timing is good, and like always, he emotes rather well. His dig at Naidugaru in a Janmbhoomi-style speech is hilarious. 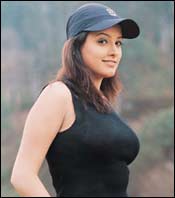 Anita deprives us of some vicarious pleasure by drastically losing weight from her Sriram days where she was endearingly described as a 'pregnant cow'. She looks svelte, but hardly makes up for any other of her shortcomings. Sridevi is the surprise package. With a very low-key presence and with her Telugu looks, she is quite refreshing.

We've never heard of this director called Konda (???), but he does a fairly decent job - if you can discount the inspired parts, that is. RP's music is just tolerable. But the first college number and the Miss India Neha Dhupia cabaret are positively cacophonous.

ADVERTISEMENT
This page was tagged for
?????? ??????????? ????
ninne ishtapaddanu movie lo ringtones telugu
ninne ishtapaddanu full
ninne istapaddanu telugu movie song
Ninne Isthapaddanu telugu movie
Follow @fullhyderabad
Follow fullhyd.com on
About Hyderabad
The Hyderabad Community
Improve fullhyd.com
More
Our Other Local Guides
Our other sites
© Copyright 1999-2009 LRR Technologies (Hyderabad), Pvt Ltd. All rights reserved. fullhyd, fullhyderabad, Welcome To The Neighbourhood are trademarks of LRR Technologies (Hyderabad) Pvt Ltd. The textual, graphic, audio and audiovisual material in this site is protected by copyright law. You may not copy, distribute, or use this material except as necessary for your personal, non-commercial use. Any trademarks are the properties of their respective owners. More on Hyderabad, India. Jobs in Hyderabad.