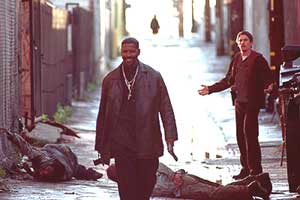 Smriti Kashyap / fullhyd.com
EDITOR RATING
6.0
Performances
Script
Music/Soundtrack
Visuals
NA
NA
NA
NA
Suggestions
Can watch again
NA
Good for kids
NA
Good for dates
NA
Wait to rent it
NA
Ever hear the junkie saying that even corruption won't make money if the government ran it? But doing a double flip on that line, we see the LAPD's narcotic's dept. throw up a few prime candidates who seem to have their own inner circle of drugs and dirty money going on, all the while posing to be cops.

How bad is bad, how far would you go to cross the line between duty and greed? And why ain't you helping yourself to that wad of cash? That's the flick, fellas...Training Day follows badass cop Alonzo Harris (Denzel Washington) as he snaps, snarls and snipes at his rookie, cop-under-training Jake Hoyt (Ethan Hawke).

Reality takes a big bite off Ethan Hawke as he's been let off the leash a bit and allowed to wander anywhere close to a star let alone a Denzel Washington. Polite, married and a pop of a 9-month babe, Jake finds himself in the front seat with Alonzo as he tries out for the latter's 'narcotics' unit.

But Training Day for Jake doesn't exactly get off to a coffee and donut start, as he finds himself intimidated by his boss. "A narcotics officer must have narcotics in his blood," snarls Alonzo as he hands Jake a PCP-laced smoke and tells him to do crack at gunpoint. Snifffffff and WHOOOOOSH... there goes his cerebellum out of the window.

Stoned and with his brain turned to rubble, he turns out to be a .22 intellect in a .357 magnum world of drug busts, beat-outs, big guns, shootouts and cop-out sessions, as he rides along with boss Alonzo. Staying high in his own 'hood, Alonzo manages a life unthreatened and unintimidated by the others as he rifles through people's houses and belongings, and makes off with their cash and stuff (holding out a pamphlet as a search warrant all the while). Jake tags along, cutting a sorry figure as he finds himself hopelessly out of place in a circle that seems to have corrupt cops crawling out of the woodwork.

The flick moves along, jumping from frame to frame and amazing us with how far Alonzo stretches the line with alarming ease. The role that fetched Denzel Washington his Oscar leaves you thoroughly zapped at his effortless performance as he careens between seemingly psychotic to crystal clear glib all in a split second. Washington, with his medallions and heavy jewelry (some of them look Olympic medals), looms larger than life and oozes menace as Ethan Hawke fades respectfully to the background looking as though he was suffering from a case of spontaneous combustion.

Once upon a time Medusa head Macy Gray makes a fab cameo as she plays a shrieky Junkie Mom with twisted finga-nails (ghetto style). Doggy Dogg gets to work his hands a bit as he wheels around in wheelchair trying hard not to get his ass busted.

On the whole, Training Day is an okay flick, good to check out the air-conditioning in the halls. It is a tad too long, though. I almost woke up and reached out for my jammies and brush. The abso fab star of the show is DW, and you need to gape at the stuff that made the little statuette choose to turn up in his glass case.
Share. Save. Connect.
Tweet
TRAINING DAY SNAPSHOT

ADVERTISEMENT
This page was tagged for
Training Day english movie
Training Day reviews
release date
Denzel Washington, Ethan Hawke
theatres list
Follow @fullhyderabad
Follow fullhyd.com on
About Hyderabad
The Hyderabad Community
Improve fullhyd.com
More
Our Other Local Guides
Our other sites
© Copyright 1999-2009 LRR Technologies (Hyderabad), Pvt Ltd. All rights reserved. fullhyd, fullhyderabad, Welcome To The Neighbourhood are trademarks of LRR Technologies (Hyderabad) Pvt Ltd. The textual, graphic, audio and audiovisual material in this site is protected by copyright law. You may not copy, distribute, or use this material except as necessary for your personal, non-commercial use. Any trademarks are the properties of their respective owners. More on Hyderabad, India. Jobs in Hyderabad.