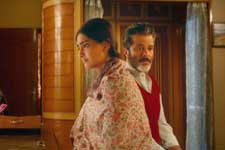 Punarvasu Pendse / fullhyd.com
EDITOR RATING
6.5
Performances
Script
Music/Soundtrack
Visuals
7.0
6.5
6.5
6.5
Suggestions
Can watch again
Yes
Good for kids
Yes
Good for dates
Yes
Wait to rent it
No
Bollywood has come a long way from 1996, when Deepa Mehta's Fire caused theatres to be stoned due to its bold portrayal of a lesbian relationship. Ek Ladki Ko Dekha Toh Aisa Laga is not the first mainstream, for-the-masses Bollywood entertainer that deals with the concept of same-sex love, but it is definitely the first one to do it sensitively, emotionally and ultimately with good-natured humour, which is a marked contrast from the crude jabs that films like Dostana took at the same subject.

Director Shelly Chopra Dhar (who is also credited as a co-writer) has managed to present a movie that deals with a topic like homosexuality that still carries a certain stigma in India, in a nuanced, entertaining way without seeming preachy or in-your-face at any point. Gazal Dhaliwal's screenplay and dialogue-writing convey both the vulnerability and the quiet confidence of Sonam Kapoor's character Sweety Chaudhary, while also managing to portray her single confrontational scene with fierce energy.

A chance encounter with a girl on the run from her brother has aspiring playwright Sahil Mirza (Rajkummar Rao) smitten by her and following her to Moga, Punjab, in a breezy first half which makes you believe that it is a traditional boy-meets-girl romantic comedy. Caterer Chatro (Juhi Chawla displaying excellent comic timing) offers Rao an abode in the town, as well as information to help him meet the girl, Sweety, who had told him that his writing looked like he had never experienced true love.

The end of the first half marks a paradigm shift in the tone of the movie, as Sweety comes out to Rao that she loves a woman.

In the house of a patriarchal Chaudhary family, where a man is supposed to enter the kitchen "only to replace a cylinder", Ek Ladki Ko Dekha Toh Aisa Laga juxtaposes the unorthodox sexual preference (and the loneliness resulting from that) of a small-town Punjabi girl with the close relationship she shares with her father. In a role that mirrors real life, Anil Kapoor plays the doting dad Balbir Chaudhary with élan. The most serious headwinds come from elder brother Babloo (Abhishek Duhan), who is privy to her secret and is ashamed of her "bimari" and the shame it will bring to his family, and who tries very hard to convey to his father how improper Sweety's relationship is. Honour is a strong driving force in the life of the Chaudhary family, and it prompts Sweety to almost marry a man just to respect the wishes of her family.

All of the supporting cast comes together to make a believable Punjabi household - with Madhumalti Kapoor playing the traditional but loving grandma, and the servants Billauri (Seema Pahwa) and Chaubey (Brijendra Kala) who have a bet going on over who marries Sweety.

Anil Kapoor steals the show as the rich, fun-loving patriarch who wanted to be "India's Best Chef", and is matched in charm by Juhi Chawla each time they appear together on screen. Rajkummar Rao plays the roles of both the smitten lover and the well-intentioned scheming ally, in another impressive one-off foray into mainstream entertainment. Sonam Kapoor portrays the hopelessness of her situation very well, but seems a bit outgunned by her fellow cast members in some parts of the movie. Regina Cassandra looks at ease throughout her small yet pivotal Bollywood debut role.

The real winner in Ek Ladki Ko Dekha Toh Aisa Laga, however, is the way it puts forward the message it wishes to deliver. In an India that finally cast aside the legal wrangles that homosexual relationships had to face with Section 377, the movie tries to bring about a change in the way lesbian (and gay) people are viewed without compromising on the entertainment necessary to make it happen. A lot of culture is made normative through film in today's world, and it is a good thing that mainstream Bollywood is trying to venture in that direction. Rao sums it up perfectly: "Hamara jo natak hai na, dimag se nahi, dil se dekhiyega."
Share. Save. Connect.
Tweet
EK LADKI KO DEKHA... SNAPSHOT
EK LADKI KO DEKHA TOH AISA LAGA SNAPSHOT 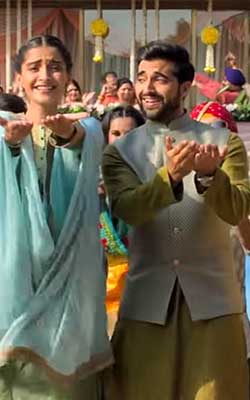 ADVERTISEMENT
This page was tagged for
Ek Ladki Ko Dekha Toh Aisa Laga hindi movie
Ek Ladki Ko Dekha Toh Aisa Laga reviews
release date
Anil Kapoor, Juhi Chawla
theatres list
Follow @fullhyderabad
Follow fullhyd.com on
About Hyderabad
The Hyderabad Community
Improve fullhyd.com
More
Our Other Local Guides
Our other sites
© Copyright 1999-2009 LRR Technologies (Hyderabad), Pvt Ltd. All rights reserved. fullhyd, fullhyderabad, Welcome To The Neighbourhood are trademarks of LRR Technologies (Hyderabad) Pvt Ltd. The textual, graphic, audio and audiovisual material in this site is protected by copyright law. You may not copy, distribute, or use this material except as necessary for your personal, non-commercial use. Any trademarks are the properties of their respective owners. More on Hyderabad, India. Jobs in Hyderabad.