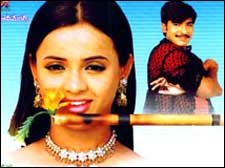 EDITOR RATING
3.0
Performances
Script
Music/Soundtrack
Visuals
NA
NA
NA
NA
Suggestions
Can watch again
NA
Good for kids
NA
Good for dates
NA
Wait to rent it
NA
Let's face it - nobody likes to be sold off to an Arab Sheikh. Even if he's come by flight, and is there only for two days. Meghamala is a girl who is in this very situation when she luckily lands in the home of Sanjay, a bachelor leading a unanimous existence (or whatever the word for staying alone is). She starts to like him, since they are so unlike each other - she's flippant while he's grouchy, she smokes while he's pious, she's into pop while he's into devotional, and she can act while he can't.

It's not hard to see how the film unfolds, right? Actually, it is. Very. Meghamala should ideally have been a good tale - it's normally hard to screw up anything that involves a girl and a boy getting stuck into staying together. However, the crew of this one don't know that, and so screw it up. Unfortunately, they don't even keep it a secret - it's there for everybody to see.

Anyway, Sanjay (Santosh Pavan) wants Meghamala (Tanu Roy) out of his house, but cannot tell her directly since she'll misunderstand it to be asking her out, when he's in fact asking her out. Especially since she's already hinted to him that she's interested in him - for example, she's told him that she's willing to take her clothes off, get into bed with him, and have wild, raunchy sex with him. There can be few alternate ways to interpret that sentence.

The film progresses showing several moments in the lives of Sanjay and Meghamala as they masquerade as husband and wife to keep the neighbours' speculation at bay. If you've seen the original Missamma (NTR/Savitri), you'll know that this thing can be very cute indeed - just clever conceptualizations of the individual moments in this overall theme. Only, the makers of this one need to be told that they need to look up the word "screenplay", preferably under "s".

The second half of the film gets better, thanks mostly to a serendipitous performance by Tanu Roy. But that's just putting a lost cause on life support. The comedy is risqué, and the photography vacillates between enervated and doggedly resurgent. And let's talk about the music some other day.

Santosh Pavan bleats his way through, and looks and dresses like he'd prefer to be left out of anything life has to offer. He does have a certain well-defined set of emotions, and we quickly counted them. Still, he and the person playing his boss are mostly fine for their roles, but the girl playing Madhuri looks like she needs glucose quickly. The other performances, mostly comic, are tolerable. The film has an overdose of raunch for its theme, and several dialogues are bleeped out.

ADVERTISEMENT
This page was tagged for
Megamala o pellamgola mp3 download
meghamala oh pellam hola na songs download
megamala oh pelam Gila mp3 songs
megamala oh pelam Gila songs #spf=1591982385799
megamala o pellam gola movie mp3 songs
Follow @fullhyderabad
Follow fullhyd.com on
About Hyderabad
The Hyderabad Community
Improve fullhyd.com
More
Our Other Local Guides
Our other sites
© Copyright 1999-2009 LRR Technologies (Hyderabad), Pvt Ltd. All rights reserved. fullhyd, fullhyderabad, Welcome To The Neighbourhood are trademarks of LRR Technologies (Hyderabad) Pvt Ltd. The textual, graphic, audio and audiovisual material in this site is protected by copyright law. You may not copy, distribute, or use this material except as necessary for your personal, non-commercial use. Any trademarks are the properties of their respective owners. More on Hyderabad, India. Jobs in Hyderabad.