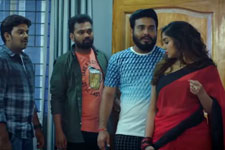 Chaitanya Karthik / fullhyd.com
EDITOR RATING
1.0
Performances
Script
Music/Soundtrack
Visuals
1.0
1.0
4.0
1.0
Suggestions
Can watch again
No
Good for kids
No
Good for dates
No
Wait to rent it
No
Comedy is one of the most difficult genres to pull off, considering that different people have different sensibilities and different opinions about what does not cross the fine line between funny and insensitive. And Tollywood is probably the industry that produces some of the best comedies. But we still don't often get to see movies that hit the mark at being really funny. And sometimes we get absolute crap, like Three Monkeys.

Movies that try to be funny and fail at it are still tolerable. But movies that are nothing more than a cringe fest lasting about two hours - it's tough to forgive them. And Three Monkeys is a classic example. I'm wondering what I'm supposed to write about the story, because there isn't any. Santosh (Sudheer), Anand (Ram Prasad) and Phani (Srinu) are three chaddi buddies who grow up together. They have just one goal in life - to get laid. But Santosh realizes that something is wrong with him, and gets to know that he has erectile dysfunction. So he and his friends want to "test that out", and call a prostitute to their house.

They're in for a mental dysfunction soon because she dies and no one knows how that happened. (And one of the weird things here is that even the dead body turns them on. Necrophilia, is that you?) Things get even worse when they are accused of murder. What happens after that forms the rest of the story, which is as pointless as the traffic lights in GTA.

The director probably thought that just having three people who've become famous because of their comedic skits in Jabardast would be enough to make people care about the film. While Jabardast skits are fine because they last for about ten minutes or so, trying to do the same for over two hours is nothing and expecting the audience to embrace it is being extremely foolish. This movie stands as a testimony to that.

There are sexist undertones here and there, which make you uncomfortable. There is a scene where Anand just goes behind a colleague and gropes her. The problem here is that the makers of the movie do not even know that making that look funny is a very serious issue. This is just one example. The whole first half almost continually induces discomfort in you.

And even if you're still brave enough to watch the rest of the movie, it doesn't get any better. For no plausible reason, the film suddenly takes a turn and delves into the sentimental aspect of the plot, without ever establishing its existence.

None of the performances manages to create an impression. You would expect that people like Sudheer and Srinu who have created a niche for themselves would at least play their parts well, but that turns out to be an outlandish expectation. Then again, when the characters and the story themselves are laden with rubbish, you can't expect great emoting.

There isn't one technical aspect of this movie that shines, either, except for the music, which is decent at best. Again, you can't blame the technicians, since if you have a script that screams nonsense, even great efforts can get lost due to the sin of association.

You might feel like a monkey for deciding to watch this movie. And if you call this garbage, you'd be offending trash cans. Refrain from watching this one if you intend to retain your sanity.
Share. Save. Connect.
Tweet
THREE MONKEYS SNAPSHOT 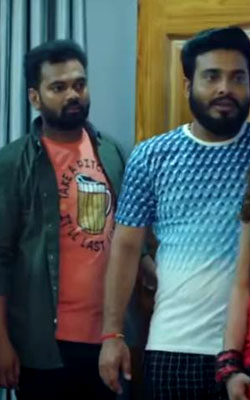 ADVERTISEMENT
This page was tagged for
Three mokeys full telugu movie
3 monkeys movie rating
Three Monkeys telugu movie
Three Monkeys reviews
release date
Follow @fullhyderabad
Follow fullhyd.com on
About Hyderabad
The Hyderabad Community
Improve fullhyd.com
More
Our Other Local Guides
Our other sites
© Copyright 1999-2009 LRR Technologies (Hyderabad), Pvt Ltd. All rights reserved. fullhyd, fullhyderabad, Welcome To The Neighbourhood are trademarks of LRR Technologies (Hyderabad) Pvt Ltd. The textual, graphic, audio and audiovisual material in this site is protected by copyright law. You may not copy, distribute, or use this material except as necessary for your personal, non-commercial use. Any trademarks are the properties of their respective owners. More on Hyderabad, India. Jobs in Hyderabad.