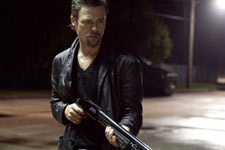 Kritika Deval / fullhyd.com
EDITOR RATING
7.0
Performances
Script
Music/Soundtrack
Visuals
8.5
6.0
7.0
9.5
Suggestions
Can watch again
Yes
Good for kids
No
Good for dates
No
Wait to rent it
No
Killing Them Softly is cool; very, very cool. Right from its iconoclastic protag; to the nihilistic, recession-hit, and ever so slightly anachronistic world that he occupies, this is definitely not the movie for you if what you want from cinema is someone to root for. The trigger-happy people this story revolves around don't command it, or require it of us.

Stuck in the entropying vortex of life in the underworld - set against a backdrop of the 2008 elections that saw Obama calling for "hope" and "change" as the economic crisis ate away at the standards of living - is Jackie Cogan (Brad Pitt), the guy the mob bosses send their lawyers (hey, mobsters are people, too) to every time they need a situation cleaned up. So, one fine day, when two greenhorns Frankie (Scoot McNairy) and Russell (Ben Mendelsohn) go rob a mob-backed poker game, it's Cogan who's called on to eliminate the two nincompoops and whoever might have put them up to it.

Claiming to prefer shooting people from a distance and "killing them softly" to avoid the emotional mess of the victims crying for mercy, Cogan sub-contracts the job to an old friend Mickey (James Gandolfini, brilliantly hilarious) in an uncharacteristic stroke of sentimentality. Thoroughly let down by the way Mickey has let himself atrophy over booze and "every kind of a** that ever existed", Cogan gets back on the job, and finishes it with a chilling competence.

The movie is based on a 1974 book called Cogan's Trade, written by George V Higgins. And it is Cogan's show all the way, as he chats you up, charms you, and makes you trust him until moments before he blows up a vital organ or two in a picturesquely gruesome shot. Every depraved performance (there is no other kind) by every actor is brilliantly done.

The whole movie is a treat to the eyes, like a cobra that captivates and hypnotizes its prey right before it swoops down on it. People get shot in every possible way: slo-mo where you can see individual blobs of flesh mingling with individual shards of glass, extra-quickly as the bullet goes right into the head and you end up with bheja-fry live, even extremely unexpectedly.

And then there's the hilariously quirkily snarky '50s and '60s music that constantly acts as a prelude to someone dying.

So we have a mostly well-written movie that looks beautiful, has brilliant performances, sounds lovely and makes you laugh at the most unexpected things. The catch? There's just way too much talk! The conversation roams and meanders all over the place as it goes through narcotic enhanced-hazes and nervous explanations and whatnot. That beautiful shot or that quirky comeback is hard to appreciate when you're trying really hard to keep yourself up.

All of this yakking around might be good for a book, but when you're seeing it on a screen, a little less conversation and a little more action, please.
Share. Save. Connect.
Tweet
KILLING THEM SOFTLY SNAPSHOT 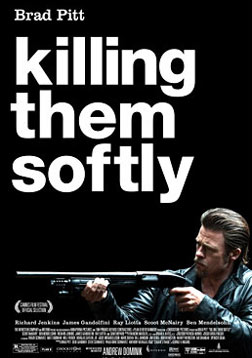 ADVERTISEMENT
This page was tagged for
Killing Them Softly english movie
Killing Them Softly reviews
release date
Karl Brad Pitt, ?Ray Liotta
theatres list
Follow @fullhyderabad
Follow fullhyd.com on
About Hyderabad
The Hyderabad Community
Improve fullhyd.com
More
Our Other Local Guides
Our other sites
© Copyright 1999-2009 LRR Technologies (Hyderabad), Pvt Ltd. All rights reserved. fullhyd, fullhyderabad, Welcome To The Neighbourhood are trademarks of LRR Technologies (Hyderabad) Pvt Ltd. The textual, graphic, audio and audiovisual material in this site is protected by copyright law. You may not copy, distribute, or use this material except as necessary for your personal, non-commercial use. Any trademarks are the properties of their respective owners. More on Hyderabad, India. Jobs in Hyderabad.