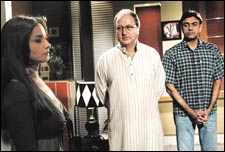 Deepa Garimella / fullhyd.com
EDITOR RATING
2.5
Performances
Script
Music/Soundtrack
Visuals
7.0
3.5
6.0
6.5
Suggestions
Can watch again
No
Good for kids
No
Good for dates
No
Wait for OTT
Yes
Morning Walk is like an endorsement for the TV soap genre. It tries to rise above the obvious and intellectualize what is essentially cud-chewing material for bored television viewers - audiences whose afternoons are made livelier and meatier by vicarious involvement with the life-happenings of an on-screen swarm of people, most of whom are related to one another by blood, by sacred vows, or by the bed.

Unfortunately, it just turns out to be one of the most depressing movies to hit the screens lately, with no one ending up any wiser for it.

The old and slightly ailing Jai (Anupam Kher) lands in Mumbai from Kolkata, to be with his son Indra (Rajit Kapoor). Indra's wife, Rita (Divya Dutta), is no more thrilled at the uninvited presence than a woman who discovers a coffee stain on her cocktail dress just before a party. The cigarette-smoking, aggressively dressed Rita comes to terms with her new occupant only after she sees a materialistic benefit in the picture, one that's centred around Jai selling his house in Kolkata.

Jai, meanwhile, has rekindled a disturbing spectre from his revolutionary Kolkata days, when he spots Neelima (Sharmila Tagore), a student-friend of his, in the colony. Neelima's daughter dreams of studying abroad, but has to step back because they're not too well-off. The skeleton in the closet is what forms the rest of the story.

This is a society that finds it hard enough to digest romance among the elderly - lonely though they may be - and when there are several layers of emotions and family members involved, there had better be some thought put in to avoid further awkwardness. Morning Walk takes on what it supposes is a bold theme, but flounders merely because it doesn't have any value to add to the premise.

The characters are bizarrely written - whether it's Jai's granddaughter and her precocious dialogues, or Rita and her brazenness and her display of way too much cleavage in her father-in-law's presence. And Neelima's daughter's love story with Ajay (Shayan Munshi) leads nowhere.

Anupam Kher does the best job of all, followed closely by Rajit Kapoor, who is flawed only by the fact that his role has no nuances. Both Sharmila Tagore and Anupam Kher look graceful, but a few instances make the grace take a beating - their flashback scenes, for example.

Avika, as Jai's granddaughter, is good, and looks suspiciously quite ready to bag a couple of TV serials next. Shayan Munshi is allright in a role is completely one-dimensional, and Divya Dutta does get on your nerves, with her wardrobe.

The title song is a pleasure to listen to, and there's a breezy picnic song with Indra's family, but otherwise the background music is quite gloomy. There are a couple of meaningless duets between the younger couple, Shayan Munshi and Nargis. The visuals are fortunately not as putting off as the story is. There are just a handful of characters in the story, and just a few settings, and the makers manage to make it all look highly palatable.

Watch Morning Walk if you have a problem with yourself smiling too often. It's the kind of movie after which everyone - including the cast of this one - will quietly go back to what they were doing earlier.
Share. Save. Connect.
Tweet
MORNING WALK SNAPSHOT

ADVERTISEMENT
This page was tagged for
morning walk 2009 full movies
Morning Walk hindi movie
Morning Walk reviews
release date
Anupam Kher, Sharmila Tagore
Follow @fullhyderabad
Follow fullhyd.com on
About Hyderabad
The Hyderabad Community
Improve fullhyd.com
More
Our Other Local Guides
Our other sites
© Copyright 1999-2009 LRR Technologies (Hyderabad), Pvt Ltd. All rights reserved. fullhyd, fullhyderabad, Welcome To The Neighbourhood are trademarks of LRR Technologies (Hyderabad) Pvt Ltd. The textual, graphic, audio and audiovisual material in this site is protected by copyright law. You may not copy, distribute, or use this material except as necessary for your personal, non-commercial use. Any trademarks are the properties of their respective owners. More on Hyderabad, India. Jobs in Hyderabad.