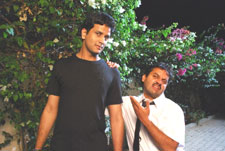 Harika Vankadara / fullhyd.com
EDITOR RATING
1.0
Performances
Script
Music/Soundtrack
Visuals
4.0
1.0
2.0
3.0
Suggestions
Can watch again
No
Good for kids
Yes
Good for dates
No
Wait to rent it
No
If you are a person who has not been pre-fed the normal quantities of Suppandi strips, Sardarji jokes and Mr. Bean episodes, Vara Prasad And Potti Prasad (VP & PP) may just about elicit a laugh from you. For all the others, this one is an indigestible mishmash of one-liners and yesteryear comic scenes, that has its audiences leaving the hall within half-an-hour or earlier, whichever comes earlier.

The USP of the movie is meant to be its "on-the-road comedy", but the director is yet to learn to stop while the going is good, and to differentiate between an actual joke and a glaring PJ.

Vara Prasad (Srinivas Avasarala) and Potti Prasad (Vijay Sai) are orphans who befriend each other at a tender age. PP is infatuated by a young girl named Hari Priya, who presents them with blankets and teddy bears at the temple in which they sleep, and this character is the fuel that the outdated engine of the movie trudges ahead on.

A cab driver, PP mistakes one of his passengers named Hari Priya (Priyanka) for his long-lost love interest. On learning that the lady is headed for Kodaikanal, he convinces VP to accompany him. PP intends to meet Hari Priya on the pretext of returning her briefcase to her, and 2 goons follow them for the briefcase.

A spoof of Bommarillu has been worked into the movie, and the rest of the story is a good guess.

The film is replete with flaws that cannot be excused by its being a low-budget movie. The first half is dreadfully dull, and the second half picks up ever so slightly. If you are one of those who receive endless streams of witty SMSes and e-mails, you will hardly find the comedy parts funny.

Srinivas Avasarala, Vijay Sai and a couple of minor actors have acted whenever the script has allowed them to. Given that VP & PP is a straight Telugu film, the voiceovers are pathetically out of sync.

The production design is pretty low-grade. Pragathi Resorts cannot be passed off as a park in Kodaikanal. The costume designing and set designing teams are sub-par, and further drag down the quality of the film. The set on which a headline-making fund-raiser event is shown to take place would better serve as the venue of a drab dinner party. And the one song in the film is more like a musical video of Priyanka's photoshoot.

ADVERTISEMENT
This page was tagged for
Vara Prasad & Potti Prasad telugu movie
Vara Prasad & Potti Prasad reviews
release date
Srinivas Avasarala, Vijay Sai
theatres list
Follow @fullhyderabad
Follow fullhyd.com on
About Hyderabad
The Hyderabad Community
Improve fullhyd.com
More
Our Other Local Guides
Our other sites
© Copyright 1999-2009 LRR Technologies (Hyderabad), Pvt Ltd. All rights reserved. fullhyd, fullhyderabad, Welcome To The Neighbourhood are trademarks of LRR Technologies (Hyderabad) Pvt Ltd. The textual, graphic, audio and audiovisual material in this site is protected by copyright law. You may not copy, distribute, or use this material except as necessary for your personal, non-commercial use. Any trademarks are the properties of their respective owners. More on Hyderabad, India. Jobs in Hyderabad.