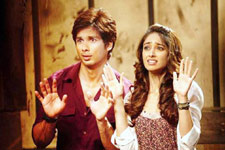 Neha Mathur / fullhyd.com
EDITOR RATING
5.5
Performances
Script
Music/Soundtrack
Visuals
5.0
4.0
5.0
5.0
Suggestions
Can watch again
No
Good for kids
Yes
Good for dates
Yes
Wait to rent it
Yes
Phata Poster Nikhla Hero is ostensibly a nod to the art of performance, and consequently, theatrics pervade the world of this film with absolute glee. In the movie, an aspiring actor pretends to be an honest cop while a steadfast cop pretends to be a fading actor. Identities are mistaken, swapped, primped, and some even throttled. Yes, it suggests a fiasco, and a fiasco it does become.

Vishwas Rao (Shahid Kapoor) lives and breathes the big Mumbai Dream, hoping for a one-way ticket to Bollywood and stardom. His mother Savitri (Padmini Kolhapure), an autorickshaw driver, on the other hand, is adamant that he dons the khaki police uniform and fistfights injustice for a better nation.

The first half of the film is genuinely engaging, what with a bubble-gum-blowing villain, Gundappa (Saurabh Shukla), whose sidekicks are called RDX and Biscuit. Vishwas' lame gags and physical tomfoolery, as well as the recycled dialogue of past Bollywood hits, all combine to produce a droll humour that is sufficiently amusing.

Real-life invades reel-life as Vishwas Rao tries to fulfill his dream. He arrives in Mumbai, at his mother's bidding. But instead of gaining entry in the police services, he makes his way to Sapna Guest House, where Jogi Bhai (Sanjay Mishra), in exchange for whisky, promises Vishwas a "break" on the silver screen.

Nudged by fate and his own sleight of hand, Vishwas' path crisscrosses that of high-strung do-gooder (an embarrassment!) "Complaint Kaajal" (Ileana D'Cruz), and Joint Commissioner of Police, Khare (Darshan Jariwala).

Misunderstandings compounded by lies, gags melded with slapstick, and ta-da - we have Vishwas as a fake police officer, reluctantly (but efficiently) beating up goons and saving the day. The action sequences, no doubt, have been worked in to hook the audience. The scuffles are sanitized - no spilling of guts! This is one of the highlights of Phata Poster Nikhla Hero - the humour is clean, and so are the fights.

As the plot thickens (yes, even weak screenplays thicken, much like porridge), Vishwas Rao gains currency in the world of both cops and robbers, only to be caught in his own sticky mess. It is here that the story, too, stumbles and falls.

The emotional melodrama between mother and son, though enacted well, seems out of place. The film hops from pure comedy to sudden melodrama, then back to brief spoofing, and then again to weepy mush.

There is a patchwork of scenes and one-liners from memorable movies, ranging from Deewar to Andaz Apna Apna. These work as separate moments, but cannot tie up to make the whole film a consistently entertaining vehicle. Even the penultimate portion (the final showdown with arch-villain Napoleon), though crowded with boisterous buffoonery, seems overstretched at times but never reaches a peak.

The only consistent (thematic) element is the "Meri Maa" trope, which ends up being overused, and seems dated. Savitri is pure Bollywood mommy-material from the eighties. She typifies maternal love as well as moral uprightness. But this character is also an emotional bully, who hectors her son into accepting her way of life. (Of course, this is our reading of Savitri. The film portrays her as unblemished.)

There are moments where we see Savitri's spunk via her social consciousness, but ultimately, she conforms to the insipid image of the filmi Maa. High time Bollywood portrays a new generation of mothers. But there is no doubt that Padmini Kolhapure injects a quiet grace and realism into her character, and shines as an actor.

As her son Vishwas, Shahid Kapoor pulls off many of the comic moments, but at times he seems like he is trying too hard. His dancing skills, though, remain flawless.

Ileana has an annoyingly ditsy role to play, which she plays the best way she knows. Saurabh Shukla and Sanjay Mishra are spot on, as is Darshan Jariwala as the sporting Joint Commissioner.

The songs are placed at regular intervals, but are disconnected with the plot. In Main Rang Sharbaton Ka and Mere Bina Tu, the leading duo transform into suave, glamorous individuals, almost as if showcasing the designer's wardrobe. Tu Mere Agal Bagal Hai is kitschy and fun. Dhating Naach with a gyrating Nargis Fakhri sets your foot, tapping, if only temporarily.

Phata Poster Nikhla Hero is an oft-told story - the inevitable conversion of a goofy (apparently), self-centred young man into a responsible son/citizen. But then, the film, to begin with, never boasted of a strong script, so we can overlook that bit. Where one does feel let down is the mid-way muddle that it creates, the tired jokes that don't work in the latter half. Rajkumar Santoshi lets us down.

Go watch it if you don't mind a middling comedy, and more importantly, if you are starved of "wholesome" family entertainers that caters to the whole spectrum, from grandparents to the little ones.
Share. Save. Connect.
Tweet
PHATA POSTER NIKLA HERO SNAPSHOT 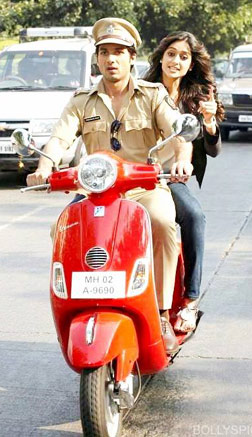 ADVERTISEMENT
This page was tagged for
phata poster nikla hero full movie
phata poster nikla hero movie rdx com
Phata Poster Nikla Hero hindi movie
Phata Poster Nikla Hero reviews
release date
Follow @fullhyderabad
Follow fullhyd.com on
About Hyderabad
The Hyderabad Community
Improve fullhyd.com
More
Our Other Local Guides
Our other sites
© Copyright 1999-2009 LRR Technologies (Hyderabad), Pvt Ltd. All rights reserved. fullhyd, fullhyderabad, Welcome To The Neighbourhood are trademarks of LRR Technologies (Hyderabad) Pvt Ltd. The textual, graphic, audio and audiovisual material in this site is protected by copyright law. You may not copy, distribute, or use this material except as necessary for your personal, non-commercial use. Any trademarks are the properties of their respective owners. More on Hyderabad, India. Jobs in Hyderabad.