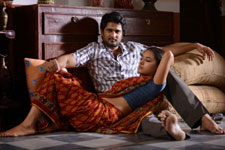 Kritika Deval / fullhyd.com
EDITOR RATING
4.5
Performances
Script
Music/Soundtrack
Visuals
6.0
3.0
4.0
7.0
Suggestions
Can watch again
No
Good for kids
No
Good for dates
No
Wait to rent it
Yes
Wait. What just happened in there?

An experimental venture by a newbie director, Adavi Kachina Vennela is just the right blend of technical knowhow and sheer WTF-ness of plot that turns the viewers' minds into confused piles of mush.

Take the premise. The hero (Aravind Krishna), who remains nameless for some inexplicable reason, is an obsessive person whose brain works like a metal detector. No, you did not misread that sentence.

Okay, let's assume, for compassion's sake, that this is somehow a good idea that could possibly occur in at least one of the infinite realities that the quantum theory assures us exist (which happens to be real science), and take a look at the makers' effort to create a background to this "condition". A neighbor who's drinking with our hero "explains" that the reason for the hero's ability is that his neurons communicate really hard using electromagnetic impulses. That's it.

Yes, we get that this is a movie, and that you're supposed to just sit back and enjoy it, but if you're not going to give us some plausible science, then why even make science fiction? Also, Aravind Krishna's poker face gets super boring after a while, and that makes you think, which gives you a headache.

Where were we, again? Yeah, metal detector. So, this ability comes into play right at the beginning when Tanikella Bharani's disembodied voice tells you that a long, long time ago, there was a doctor who had a magical metal object that could cure all diseases, but then the doctor died and swallowed it before dying. In his obsession to find that stone and change the face of the current health care industry, Aravind Krishna's character thwarts his father's ambitions for him, ignores his wife (Pooja Ramachandran) until she's driven to cheat on him and eventually leave him when he forgets her name, and becomes the village laughing stock.

But then, once the wife and father are both out of his life, Vennela (Meenakshi Dixit) fakes an accident into it, and the plot thickens to an untenable consistency. This is where your doubts about the film are confirmed. It doesn't know what it wants to be.

The sad part is, there are a few bits that work really well. The relationship between Krishna's and Ramachandran's characters is handled with great delicacy, and Ramachandran delivers an overall stellar performance. Hers is a face we want to see more often, and in movies that she deserves.

Aravind Krishna's character is too lacking of any nuance to be interesting, but he emotes as well as he can given the constraints. Meenakshi Dixit is a grating change of pace after Pooja's subtlety, and she suffers by comparison.

Then, there are the camera work and the editing, both of which are often stunning but are as haphazard and lacking of all focus as the story. Some of the music is good, but most of it is jarring in construction as well as placement.

Verdict: If you can make head or tail of the title of the film, hats off to you. If you can apply the same acumen to the actual plot and come up with a coherent meaning, there is something very wrong with you.
Share. Save. Connect.
Tweet
ADAVI KACHINA VENNELA SNAPSHOT 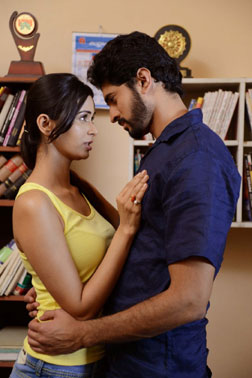 ADVERTISEMENT
This page was tagged for
Adavi Kachina Vennela telugu movie
Adavi Kachina Vennela reviews
release date
Arvind Krishna, Meenakshi Dixit
theatres list
Follow @fullhyderabad
Follow fullhyd.com on
About Hyderabad
The Hyderabad Community
Improve fullhyd.com
More
Our Other Local Guides
Our other sites
© Copyright 1999-2009 LRR Technologies (Hyderabad), Pvt Ltd. All rights reserved. fullhyd, fullhyderabad, Welcome To The Neighbourhood are trademarks of LRR Technologies (Hyderabad) Pvt Ltd. The textual, graphic, audio and audiovisual material in this site is protected by copyright law. You may not copy, distribute, or use this material except as necessary for your personal, non-commercial use. Any trademarks are the properties of their respective owners. More on Hyderabad, India. Jobs in Hyderabad.