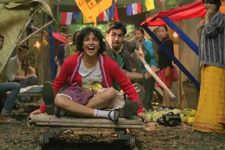 Samrat Sharma / fullhyd.com
EDITOR RATING
8.0
Performances
Script
Music/Soundtrack
Visuals
9.0
7.0
8.0
6.0
Suggestions
Can watch again
Yes
Good for kids
No
Good for dates
Yes
Wait for OTT
No
As is common with films starring major actors portraying disabled people, I expected the film to be an actor's vehicle, a film existing solely to showcase ability rather than craft. Boy, was I wrong.

Anurag Basu channels his inner Jean Pierre Jeunet and to some extent Wes Anderson to create a world of whimsy and impossible art decoration. Barfi never once goes into ultra histrionics, and while not subtle, Basu manages to keep it sweet and human. For a mainstream Bollywood film with a hearing- and speech-impaired leading man and an autistic leading lady, the avoidance of Bhansali levels of melodrama is pleasantly shocking.

The characters are created to exist in the impossible magic realism world Basu creates to stand in for Darjeeling, something that is itself a medium through which he tells his multiple timeline story. Basu's always been a consummate storyteller, deftly balancing emotion and spectacle. Barfi is his exercise in restrained-world-building and stamping his style, and it works wonderfully.

As the titular Barfi, or Murphy as his name is, Ranbir Kapoor makes the most of the subtlety that he is asked to exercise. Enunciating his name elicits the sound of the film's name, and boy howdy does Ranbir deliver that with aplomb. His joie de vivre is the catalyst that drives the first half of the film forward - a grand choice that both the director and his muse made was to use the main character's silence as a chance to introduce silent movie theatrics and slapstick, and it pays off, making our first half extremely enjoyable, and building the dreamscape Darjeeling quite solidly.

When Murphy meets a young Bengali girl and instantly falls in love, the gears shift ever so slightly, and we are introduced to her well-spoken world and the wild card Basu had been reserving - Priyanka's Jhilmil. This is the riskiest move in his arsenal, and it doesn't pay off, either. Priyanka is equal parts endearing and frustrating, using her ability as an actress well, but breaking the subtle craft of the film as we hurtle towards the core of the tale. It's from a different school, a different world, and her character's fundamental conflict often shatters the carefully art-managed world that Basu has constructed.

It's to his strength that he pulls it off as often as he lets the reins loose, though it breaks the illusion, almost as if the magician's hat was upturned, laying bare the tricks and cards he had enthralled us with. Thankfully, Ranbir Kapoor is made of sterner stuff than that, heroically saving the day with his nuanced journey through the time-shifting narrative.

The supporting cast, too, rallies behind him, with some genuinely heartfelt moments from all of them. Ileana is the biggest surprise - tasked with anchoring the emotional core as well the narrative with naught but her eyes and voice, she is absolutely what the film needed.

It's a lovely film, all told, even though let down near the end with a script choice that feels disingenuous. It's a movie that we all feel like we could love, warts and all, and that is always special. There is nothing I say that should dissuade you from watching it and deciding for yourself what you think of it.
Share. Save. Connect.
Tweet
BARFI SNAPSHOT 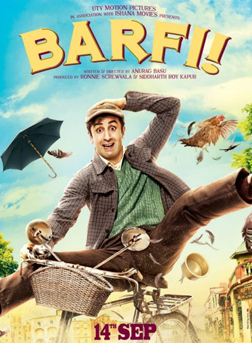 See Barfi full details
BARFI USER REVIEWS
1 - 3 OF 3 COMMENTS
POSITIVE  |  NEGATIVE |  NEWEST  |  OLDEST  |  MOST HELPFUL  |  LEAST HELPFUL
USER RATING
7.0
1 USER
Performances
Script
Music/Soundtrack
Visuals
NA
NA
NA
NA
Can watch again - NA
Good for kids - NA
Good for dates - NA
Wait for OTT - NA
YSR on 7th Oct 2012, 5:16pm | Permalink
What an awful review, especially in view of the huge amount of plagiarism involved in making this movie....
Rajendra on 18th Sep 2012, 7:20am | Permalink
MUST WATCH : BARFI - A painstakingly, well crafted film with lyrical beauty, mesmerizing visuals, stellar performances by the artists (not stars, not actors) & a marvelous story. Watch it in a good theater preferably with someone with whom you
can share the beauty of silence. This is not your commercial cinema - it draws you into its own world : making you realize how beautiful unconditional love is....

I personally liked the dangerous test of friendship & love...Just let go, indulge in the magic of Barfi!

Here's an excerpt from one of the reviews...

".......And finally, there's Jhilmil. She's just a child, dresses like one, exhibits the same needs and traits too. Selective about her friends, possessive and petulant, Jhilmil demands constant care and attention....

Barfi's distinct equation with each of these girls produces some of the sweetest moments on celluloid that I've seen in a while. While Barfi and Shruti engage in a fluttering romance and a flawless first kiss, Barfi and Jhilmil are unlikely soul mates taking comfort in replaying the most enchanted phase of life over and again -- childhood. He's like a mom to her, even in the way she calls out 'Buffy' almost like Mummy. It's so splendid, so fey; you don't want to question it. You most certainly don't want it to stop.

.....There's positive, there's comparative, there's superlative and there's Ranbir Kapoor. Every time I watch this guy, I feel impatient about his next project. What next? What more? He's such an exciting actor, correction, artist. It's like he can read his director's thoughts and give them a precise, mathematically accurate performance not too much, not too little, which is meticulous and yet so fabulously spontaneous.

....I don't understand how something so pristine can be judged as manipulative. It's like condemning chocolate just because it's sweet and melted in your mouth. Yes, there are films that try to exploit disabilities to forcefully squeeze emotions. But Barfi! refuses to acknowledge it as a disadvantage. It's about finding bliss in every bitter sweet scenario. It's about building your own fairy tale with whatever is available"

ADVERTISEMENT
This page was tagged for
Barfi hindi movie
Barfi reviews
release date
Ranbir Kapoor, Priyanka Chopra
theatres list
Follow @fullhyderabad
Follow fullhyd.com on
About Hyderabad
The Hyderabad Community
Improve fullhyd.com
More
Our Other Local Guides
Our other sites
© Copyright 1999-2009 LRR Technologies (Hyderabad), Pvt Ltd. All rights reserved. fullhyd, fullhyderabad, Welcome To The Neighbourhood are trademarks of LRR Technologies (Hyderabad) Pvt Ltd. The textual, graphic, audio and audiovisual material in this site is protected by copyright law. You may not copy, distribute, or use this material except as necessary for your personal, non-commercial use. Any trademarks are the properties of their respective owners. More on Hyderabad, India. Jobs in Hyderabad.