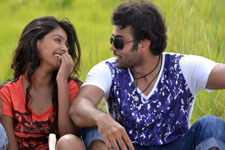 Kritika Deval / fullhyd.com
EDITOR RATING
1.5
Performances
Script
Music/Soundtrack
Visuals
4.0
1.0
6.0
3.0
Suggestions
Can watch again
No
Good for kids
No
Good for dates
No
Wait for OTT
No
We have a public service letter that we'd like to publish before we commence the daunting task of disassembling and lucidifying this travesty of cinema that takes mediocrity (the story of the 2005 movie Vennela) and painstakingly drags it down to levels for which words don't exist as of yet.

Dear Maker Of This Pathetic Excuse For A Movie,

We the hapless audience of Hyderabad would like to shake you off of the misapprehension you seem to have that the portrayal of "toilet humour" cannot be done unless in toilets. Also, the various noises that accompany these portrayals are not funny all by themselves, even to 13-year-old boys. We request you to pretty-please keep these pointers in mind before you decide to embark on another assault on our senses.

Yours thoroughly grossed out,
The (aforementioned) hapless audience of Hyderabad.

Now that we're done with our good deed of the day, let us start with the review. As we mentioned before, Vennela 1 1/2 takes its basic plot of good 'ol AP diaspora for the sake of education from the 2005 circumstantial hit Vennela. While the latter at least had a certain freshness in the way it dealt with relationships and characters along with the kitschy music by Mahesh Shankar, all that we can discern from the former is a predilection on part of the writer towards the most asinine form of juvenile humour imaginable.

What could the story be that could accommodate this kind of buffoonery? Well, you have Kadar (Vennela Kishore) and Sunil (Madhu) who are forced to move to Bangkok to seek their education and fortunes in the ubiquitous IT industry. There, they come across Krishna Krishna (Chaitanya Krishna) - no, that isn't a typo - who is into breaking up couples for cash. And then you have the clueless heroine Vennela (Monal Gujjar), who stays in Bangkok with a friend of hers who might or might not be a pornstar (that's just one of the million things about the movie that we haven't been able to figure out).

Vennela is there along with her male chauvinistic and overbearing fiancé. Krishna Krishna comes across Vennela in a bar, falls for her hook, line and sinker, and proceeds to get Vennela's fiancé to dump her so that he can have a shot at her. Which works. Pretty straight-forward so far, isn't it? Well what happens next is such a jumble of what they probably think are twists in the plot, that we won't even bother to try and decipher it for the fear of unalterably addling our wits.

Setting the movie in Bangkok means that the writer has a variety of themes to add to his repertoire of "levity". Therefore, you end up with non-jokes involving homophobia, lady-boys, "Thai"s and breasts, the Telugu-fied Thai accents of the people, and other what-nots that we'd rather not think about.

The performances are execrable. But we don't really blame the actors for not even trying to give to a script that is just as much a product of erratic bowel-movements. Why Bramhanandam would choose to associate himself with such a project is beyond us, as not even his efforts (which in themselves aren't very noteworthy) can take the experience of watching this movie close to bearable.

The only saving grace is the not-quite-awful music which manages to attract your attention with the mere fact that it is not as awful as the rest of the movie. 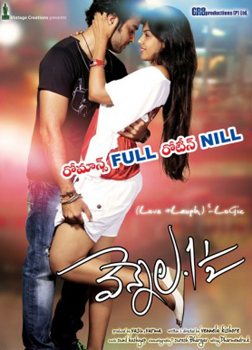 ADVERTISEMENT
This page was tagged for
Vennela 1 1/2 telugu movie
Vennela 1 1/2 reviews
release date
Chaitanya Krishna, Monal Gajjar
theatres list
Follow @fullhyderabad
Follow fullhyd.com on
About Hyderabad
The Hyderabad Community
Improve fullhyd.com
More
Our Other Local Guides
Our other sites
© Copyright 1999-2009 LRR Technologies (Hyderabad), Pvt Ltd. All rights reserved. fullhyd, fullhyderabad, Welcome To The Neighbourhood are trademarks of LRR Technologies (Hyderabad) Pvt Ltd. The textual, graphic, audio and audiovisual material in this site is protected by copyright law. You may not copy, distribute, or use this material except as necessary for your personal, non-commercial use. Any trademarks are the properties of their respective owners. More on Hyderabad, India. Jobs in Hyderabad.