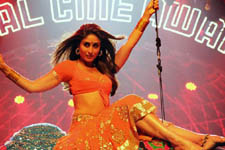 Nupur Barua / fullhyd.com
EDITOR RATING
5.0
Performances
Script
Music/Soundtrack
Visuals
6.0
4.0
5.0
5.0
Suggestions
Can watch again
No
Good for kids
No
Good for dates
Yes
Wait for OTT
No
Heroine has been in the news for a while now, specifically for the heroine who would play the lead role. We all remember how Aishwarya Rai walked out pleading pregnancy, and how Madhur Bhandarkar had a few words to say about that, before chasing all the leading ladies in the industry to step into Ms Rai's shoes. And how then Kareena Kapoor agreed to the role on the condition that she receive a part of the profits as well. And so on.

So does the film live up to expectations? Depends on what you were expecting, and how tuned in you are to the realities of the "industry" (a word that is repeated every 2 minutes or so in the movie).

So Mahi (Kareena Kapoor) is a star at the peak of her successful career, and is surrounded by a gay best friend who is also her designer, and a bitchy pessimistic tag-along who seems not right in the head. Surprisingly, nobody, including Mahi herself, gives a damn about her career, except for her loyal secretary Rashid (Govind Namdeo).

Mahi is in love with the superstar Aryan Khanna (Arjun Rampal), a commitment-phobic about-to-be-divorced moody man. In fact, Mahi is obsessed, and her erratic mood swings are attributed to her bi-polar condition. She ignores professional protocol, and soon finds herself dumped by the love of her life.

A stern lecture from her psychiatrist results in a conscious effort to get back on her toes, and enter Pallavi "I-Create-Brands" Narayan (Divya Dutta), a PR executive. Mahi is soon flooded with offers to endorse various products, and even gets into a relationship with the vice-captain of the Indian cricket team, Angad "I-Only-Date-Actresses" Paul (Randeep Hooda).

Life is good, especially when she manages to clinch the lead role in a remake of a "South" film, starring superstar Abbas Khan (Sanjay Suri) - after considerable manipulation, of course. She is written off as a showpiece, however, and is now determined to prove her mettle as an actor. She then signs a small-budget film with a National Award-winning director (Ranvir Shourey), and is left emotionally drained when the film is not released. Downward spiral all over again.

Surprisingly, given that the topic is his own backyard, Madhur Bhandarkar is startlingly superficial in the way he deals with the subject. There is too much angst, most of it not justified. Mahi is upset all the time, and it is a wonder she does not become a mental wreck within the first half-hour of the movie. There is no fixed plot - just a series of events that try to make the audience understand why the life of a heroine is so difficult. Never mind that most of it seems to be her own fault.

In typical Bhandarkar style, there are the bitchy journalists, the bitchy socialites, and the bitchy gay men, who stand with a glass in their hands and comment on the more fortunate. Their conversations are meant to update the naive audience on how things work in the "industry", no doubt, but the execution of these filler scenes leaves a lot to be desired. And if the director would have us believe his expertise in such societies, then the women are all sluts, the men are all bisexual, and no meeting is complete without copious amounts of alcohol and nicotine - this rounds up the impression of debauchery that the director intends to portray. And yes, one lesbian act, too.

The production design is tacky, and in typical Bhandarkar style, again, there is a series of parties and award functions, all held in the same space, with variations in shoddy lighting. The actors in these scenes are bad stereotypes of producers, actors, journalists, gay designers, directors and so on. The fact that they try to speak in English, in an effort to create a more cosmopolitan atmosphere, no doubt, does not help matters much.

The music is average, as are the costumes. What brings the movie alive is the acting.

Kareena Kapoor smokes, swears and cries all the time. She has been quoted as saying that she was physically and mentally exhausted with this movie, and one can see why. This is not the best performance of her career, but she tries (a little too hard, maybe) to do justice to her role, hazy as it is.

In the supporting cast, Randeep Hooda and Arjun Rampal are commendable in their roles - the former is the superior actor between the two, but both are underused. Divya Dutta, Ranvir Shourey and Shahana Goswami are terrific in their roles, despite the clichéd lines they have to mouth. Govind Namdeo is well-suited to his role, as well. Lilette Dubey is wasted, but manages to leave a mark as Mahi's mother.

Heroine is no The Dirty Picture, and comparisons between the two are inevitable. It remains to be seen if Kareena can make a dent in the very good innings that her cousin Ranbir began just last week.
Share. Save. Connect.
Tweet
HEROINE SNAPSHOT 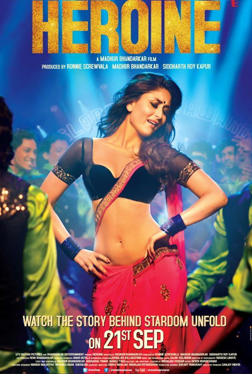 ADVERTISEMENT
This page was tagged for
Heroine hindi movie
Heroine reviews
release date
Kareena Kapoor, Arjun Rampal
theatres list
Follow @fullhyderabad
Follow fullhyd.com on
About Hyderabad
The Hyderabad Community
Improve fullhyd.com
More
Our Other Local Guides
Our other sites
© Copyright 1999-2009 LRR Technologies (Hyderabad), Pvt Ltd. All rights reserved. fullhyd, fullhyderabad, Welcome To The Neighbourhood are trademarks of LRR Technologies (Hyderabad) Pvt Ltd. The textual, graphic, audio and audiovisual material in this site is protected by copyright law. You may not copy, distribute, or use this material except as necessary for your personal, non-commercial use. Any trademarks are the properties of their respective owners. More on Hyderabad, India. Jobs in Hyderabad.