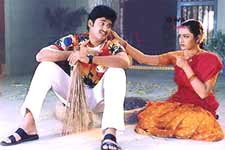 Arpan Panicker / fullhyd.com
EDITOR RATING
1.0
Performances
Script
Music/Soundtrack
Visuals
NA
NA
NA
NA
Suggestions
Can watch again
NA
Good for kids
NA
Good for dates
NA
Wait for OTT
NA
It's the Generation-Next, women are coming out of the kitchens, and now they are armed with deadlier weapons that just pin-rollers. This flick is one of those that take up the serious topic of women's lib. If one ignores the fact that the director thinks of this only after the interval and then goes about stating his opinion in a totally ridiculous fashion, there are a lot of other trivial issues that I shall bring up in the following paragraphs... no way I am gonna let you ignore them.

Like the Pandavas were told in the Mahabharata, whatever is least in the account is wrapped up first, which is why they were sent to hell first and heaven afterward. The least obvious (or rather non-existent) element in this flick is the directing, so we'll start with that. Basically the director gave the actors (for lack of a better word) a flimsy script and told them to interpret it "as you like it". What follows is mayhem, with the only apparently sensible person being Laya. And she too gives up after the interval.

Storyline, you ask? I love challenges, but writing on such an ephemeral topic is pushing it a bit too far. Well, still, here goes. Sriram (Sai Kiran) is a loser with a dad who gives him a quarter of a torn banian when he wants to buy underwear (nice way of preserving Indian culture this - beating the heat with a designer gochi!). He sees Swati (Laya), and promptly falls in love. Song. Proposes and is rejected. Song. Talks to her. Song. Takes a leak. Er...

Next, enter Rohit, exit Rohit. In a role that could have done an extra proud, and with a rendition that shows you how to make the most of opportunities, this guy manages the Herculean task of turning out to be worse than Sai Kiran in just 7 minutes and 23 seconds (which includes a song of 4 minutes and 1 second).

Then, 'cos Laya is the only one who seems to be close to be able to do any acting, she is introduced a second time as Jyoti. Next scene - Swati and Jyoti are revealed to be the same person (you would never have guessed). The reason behind this forms part of the suspense revealed in the climax. I dare you to find out.

Well, there are sundry other characters included, among whom are one brother aspiring to be a script-writer, another brother aspiring to be Naidu, and another brother with no aspirations at all. What follows is hamming of the worst kind, as with the sheer absence of that elusive thing called a story, the director is totally lost. Every ten minutes he takes the audience on an India tour with a new song shot in a new state. With most of South India covered, the only relevance this movie has is geographical in nature.

Now for the other acto... er, performers. Sudhakar and Brahmanandam have a good reputation as far as making audiences laugh is concerned. Well, this movie proves that you can make ambrosia taste like something the cat dragged in late night. A comedy track as stale as Miss Havisham's cake and the funniest line being a tired pun on the topic of "rape" make you go all yaaaawn. And as far as the title is concerned, I guess that's sarcasm for you!
Share. Save. Connect.
Tweet
ENTHA BAAVUNDOO SNAPSHOT

ADVERTISEMENT
This page was tagged for
Entha Baavundoo telugu movie
Entha Baavundoo reviews
release date
Sai Kiran, Laya
theatres list
Follow @fullhyderabad
Follow fullhyd.com on
About Hyderabad
The Hyderabad Community
Improve fullhyd.com
More
Our Other Local Guides
Our other sites
© Copyright 1999-2009 LRR Technologies (Hyderabad), Pvt Ltd. All rights reserved. fullhyd, fullhyderabad, Welcome To The Neighbourhood are trademarks of LRR Technologies (Hyderabad) Pvt Ltd. The textual, graphic, audio and audiovisual material in this site is protected by copyright law. You may not copy, distribute, or use this material except as necessary for your personal, non-commercial use. Any trademarks are the properties of their respective owners. More on Hyderabad, India. Jobs in Hyderabad.