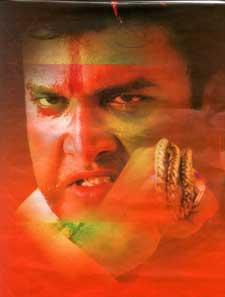 EDITOR RATING
7.5
Performances
Script
Music/Soundtrack
Visuals
NA
NA
NA
NA
Suggestions
Can watch again
NA
Good for kids
NA
Good for dates
NA
Wait to rent it
NA
When you are at the peak your career, however much you try, you don't get the role you've dreamt all your life. But when you are on the last leg of your 'heroic' career, and concede that all hopes of getting that dream role have come to nought, there comes your way that brilliant role. For Suresh, whose career as a hero has almost drawn to a close, in comes Bhavani, revving up the spirits and the fortunes of this young actor and putting him back in the race.

A good remake of Vaastav, even outshining the original, the film is about the lives of two guys caught in a quarrel with the goons. Trying to save themselves, they - Suresh and Brahmaji - kill the brothers of the leading dada of Hyderabad, Anwar. Cornered in from all sides by Anwar's gang, they take refuge in the house of Rami Reddy, another leading don of the twin cities. Swiftly working their way up in Rami Reddy's army, they become the trusted lieutenants of Rami Reddy, and, ultimately, the commanders of the army. And the film plods along expected lines, once Suresh becomes the leader of the gang.

Suresh, along with the able support of Brahmaji, entrenches himself as the godfather of the twin cities by eliminating Anwar's gang. With no one to oppose in the gangland, the undisputed leader of the twin cities gets drawn into the politicians' web and gets bumped off in the process.

Subbarao has done a wonderful job by elevating the mood and atmosphere of the film. And he has managed to extract a brilliant performance from Suresh. There is no reason why Suresh's career cannot be resurrected. Even the sentimental scenes have been worked out well, though the director cannot stop the film from plodding along in different directions, halfway through. However, he manages to bring the film back to track and power it on to its logical conclusion.

The performances by Suresh, Brahmaji and Sangeeta are no less than brilliant. They are perhaps the best of their career. The others do not have much to do as the whole film revolves round these three. However, Tanikella Bharani, as the Home Minister, peps up the film's narrative, especially when you feel the film is dragging pointlessly.
Share. Save. Connect.
Tweet
BHAVANI SNAPSHOT

ADVERTISEMENT
This page was tagged for
bhavani telugu film directed by suresh
bhavani telugu movie suresh
suresh bhavani telugu movie
Bhavani Telugu movie full
Bhavani Telugu movie drama Suresh
Follow @fullhyderabad
Follow fullhyd.com on
About Hyderabad
The Hyderabad Community
Improve fullhyd.com
More
Our Other Local Guides
Our other sites
© Copyright 1999-2009 LRR Technologies (Hyderabad), Pvt Ltd. All rights reserved. fullhyd, fullhyderabad, Welcome To The Neighbourhood are trademarks of LRR Technologies (Hyderabad) Pvt Ltd. The textual, graphic, audio and audiovisual material in this site is protected by copyright law. You may not copy, distribute, or use this material except as necessary for your personal, non-commercial use. Any trademarks are the properties of their respective owners. More on Hyderabad, India. Jobs in Hyderabad.