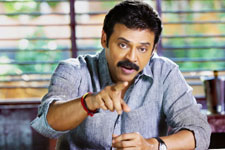 Ravi Kandala / fullhyd.com
EDITOR RATING
6.0
Performances
Script
Music/Soundtrack
Visuals
6.0
6.0
4.0
5.0
Suggestions
Can watch again
No
Good for kids
No
Good for dates
No
Wait for OTT
No
Coming from a country where films are berated for causing riots, rapes and every other disruptive activity, Drusyam picks up an extremely interesting premise. A man who watches movies day in and day out, and uses knowledge gleaned from the movies to solve problems, is an excellent pivot for a plot.

The leading man in Drusyam - notice how we will not say hero - is Rambabu (Venkatesh), a cable operator in a small village called Rajavaram. Rajavaram is in Andhra physically, but visually, it is in the middle of Kerala (thanks to this movie being a remake of a Malayalam film).

Rambabu leads a happy life with his wife Meena and two daughters (Krutika and Baby Esther). The plot takes a turn when Rambabu's elder daughter is blackmailed by a boy she meets at a nature camp. Things take an ugly turn, and Rambabu and his family find themselves in the middle of a police investigation.

Rambabu, for whom his family is everything, decides to save his family come what may. What conspires later forms the crux of Drusyam.

Drusyam starts off with an extremely laggard first half hour that literally puts you off. But once the twist in the screenplay comes in, the movie truly takes off. By the end, it is clear that the first half hour had not one unnecessary sequence. Every scene, every mannerism of each actor in these scenes, every development, is tied to something that happens later, and the lag, you begin to see, was almost necessary.

The film is taut in the second half but for a few unnecessary scenes which could have been chopped off without much impact. The way the characters stick to their story in the face of tough investigation, and the way the police officer unravels the story and explains how it was built up in the first place, are excellently shot. The fear in the eyes of the family when the crime is committed and the steel in their eyes when they take on the police investigation is beautifully depicted.

The one disappointment remains the fact that the premise of a movie-goer using knowledge gleaned from movies is not fully exploited. While it is used a few times in the first half, the thread is completely absent in the second. The possibilities that this concept creates in the first half make your mouth water, and then you are left hungry as they are left unexplored.

The performances are uniformly good. Venkatesh reprises his role as a good family man, and is a delight to watch. The age really shows behind his thick layer of pancake, and it is good that he plays his age in the movie. Meena's put on quite a bit of weight, and should lose some if she plans an extended second innings. The girls playing Venky's daughters are good. Nadiya, Naresh, Ravi Kale and the other supporting cast put in good performances, too.

The music is heavily influenced by the original, as are the locations. Sri Priya, a yesteryear actress, wields the megaphone, and does a pretty good job. She has stuck faithfully to the original, and you wish she'd done a little more homework in terms of location-scouting for this version - the interiors of Andhra would surely have provided similarly beautiful locations.

Overall, Drusyam is a decent thriller, and the fact that you empathise with the plight of the family in the movie keeps you invested in their fate till the end. This one definitely deserves a dekko.
Share. Save. Connect.
Tweet
DRUSHYAM SNAPSHOT 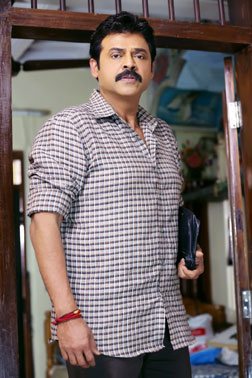 ADVERTISEMENT
This page was tagged for
Drushyam telugu movie
Drushyam reviews
release date
Venkatesh, Meena
theatres list
Follow @fullhyderabad
Follow fullhyd.com on
About Hyderabad
The Hyderabad Community
Improve fullhyd.com
More
Our Other Local Guides
Our other sites
© Copyright 1999-2009 LRR Technologies (Hyderabad), Pvt Ltd. All rights reserved. fullhyd, fullhyderabad, Welcome To The Neighbourhood are trademarks of LRR Technologies (Hyderabad) Pvt Ltd. The textual, graphic, audio and audiovisual material in this site is protected by copyright law. You may not copy, distribute, or use this material except as necessary for your personal, non-commercial use. Any trademarks are the properties of their respective owners. More on Hyderabad, India. Jobs in Hyderabad.