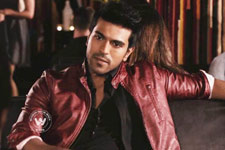 Nupur Barua / fullhyd.com
EDITOR RATING
5.5
Performances
Script
Music/Soundtrack
Visuals
5.0
7.0
5.0
6.0
Suggestions
Can watch again
Yes
Good for kids
No
Good for dates
Yes
Wait for OTT
No
The thing about remakes is that we always tend to enter the theatre with a cynical smirk. After all, hasn't Ram Gopal Varma proved, with his Sholay, that one should not tamper with a cult classic?

And considering that Zanjeer is the movie that tagged Amitabh Bachchan for the rest of his life as the "angry young man", it is only obvious that there exists, in the minds of film buffs in general and Amitabh Bachchan fans in particular, a trepidation for the new movie by Apoorva Lakhia. It has already had its share of controversies, including the Salim-Javed court case (now settled out of court for an amount between 3 and 5 crore rupees), and that of course increases the curiosity factor, but is it worth a look?

Zanjeer begins with a James Bond-ish title music video. There is a girl with chains around her body and elsewhere, lip-synching and pouting seductively at the camera, even as other visuals play in the background. In the original, the hero keeps dreaming of a man on a horse, and this dream sequence is also incorporated in the title. That is a smart move, at least for the fanatics. The message is clear - the remake is not an exact frame-to-frame copy, but it pays tribute to the original. This may appease some stubborn cynics, at least a bit.

Unlike the original, this film does not delve into the hero's childhood. The story begins with ACP Vijay Khanna (Ram Charan), who has just been jolted awake from his recurring nightmare - that of a horseman with a dagger. He then proceeds to beat up a politician who is disrupting the traffic on a busy street of Hyderabad, with a poster of Chiranjeevi in the background. It is thus established that Vijay is a bit of an embarrassment to his profession, because he is transferred, again (17 times in five years), to Mumbai. Here, he is told that he cannot defy the rules and regulations of the police force, and is asked to lead a normal, dutiful life.

In the meantime, Mala (Priyanka Chopra), an NRI, is in Mumbai for a wedding. Having consumed too much alcohol, she forces her driver to stop at a nondescript petrol pump so that she can relieve herself. She goes into the bushes to do exactly that, and witnesses a gang of goons burning a man alive by dousing him with petrol. These are oil thieves, and Mala calls the cops.

Vijay hunts down the anonymous caller and forces her to identify the man responsible for the crime. She is reluctant, but then she agrees. Unfortunately, she is now targeted, but Vijay lets her crash at his place, and romance blooms.

There are two other men that make an impact on Vijay's life in Mumbai. One is the fiery Sher Khan (Sanjay Dutt), who eventually becomes Vijay's friend. And the other is Rudraprakash Teja (Prakash Raj), who Vijay knows is responsible for crimes related to diluted petrol, but there is no proof. As the story progresses, Vijay and Teja become enemies, and each one tries to bring the other down.

This is a simple script, and is based on the original Salim-Javed creation (they are even credited in the titles). Good will triumph over evil, and sometimes, one needs to live a little dangerously to ensure that justice is served. Apoorva Lakhia, while paying his homage to the original, changes the structure a bit to make it more palatable to the modern audience. Of course, it is set in modern Mumbai, and the issues are more relatable in the remake.

The biggest flaw in the original was the horse nightmare (why would Amitabh Bachchan's character dream of a horse?), but this is smoothly explained in the remake, without dumbing down the reasons. Vijay's memories are not repressed, which is why he remembers that he lost his parents in a tragedy. That makes him the way he is - defiant, angry, and all out to prove a point. His intolerance for crime springs from the helplessness he felt when his parents were murdered in front of him.

However, the director does not oversimplify things. The screenplay flows evenly, and all the loose ends are tied up. Teja is more of a paper villain, in a way, and there are more than enough references made to his impotency (Viagra pills, for example). The movie recreates certain iconic sequences (like the one in which Vijay kicks the chair away from Sher Khan) and dialogues, but manages to make it an almost original movie nevertheless.

The comparisons then begin with the actors. Ram Charan, in an effort to be his own angry young man, just cannot compete with the original Vijay Khanna. He does not look angry - more like a petulant child. His histrionic skills are not the issue here, but somehow, he plays safe by sticking to a few standard expressions, even when he is romancing the girl.

Sanjay Dutt as Sher Khan is no match for Pran's act. He does not look too much like a loyal friend. Of course, he is hardly present in the movie.

Priyanka Chopra, otherwise a committed actor with decent skills, is irritating - she giggles at everything, and her NRI accent is the fakest one you have heard in a while.

Prakash Raj does not even try to be the original Teja. He seems to be having too much fun making meowing noises at his mistress and mouthing dialogues that sound more stand-up-ish than menacing.

As for Mahie Gill, who plays Mona - she is wasted, but creates an impact in a way. Atul Kulkarni is a pleasant break from all these actors who try too hard to be serious about their roles.

The action and the visuals are not OTT, and will not give you a headache. The costumes are decent, and the production design took some effort (it shows). Watch out for the slum sequence in which Vijay drives through houses and shanties - it is shot very well, and the cinematography is excellent. The music is nothing much to write home about, though.

Even if you are a die-hard Pran or Amitabh Bachchan fan, and even if the idea of a remake seems sacrilegious to you, we still suggest that you check out the new Zanjeer. It has an identity of its own, even while it tries not to impose too much original thought on you. Watch it - you may have some fun.
Share. Save. Connect.
Tweet
ZANJEER SNAPSHOT 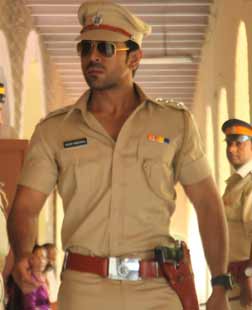 ADVERTISEMENT
This page was tagged for
zanjeer 3 movie in hindi
Zanjeer hindi movie
Zanjeer reviews
release date
Ram Charan, Priyanka Chopra
Follow @fullhyderabad
Follow fullhyd.com on
About Hyderabad
The Hyderabad Community
Improve fullhyd.com
More
Our Other Local Guides
Our other sites
© Copyright 1999-2009 LRR Technologies (Hyderabad), Pvt Ltd. All rights reserved. fullhyd, fullhyderabad, Welcome To The Neighbourhood are trademarks of LRR Technologies (Hyderabad) Pvt Ltd. The textual, graphic, audio and audiovisual material in this site is protected by copyright law. You may not copy, distribute, or use this material except as necessary for your personal, non-commercial use. Any trademarks are the properties of their respective owners. More on Hyderabad, India. Jobs in Hyderabad.