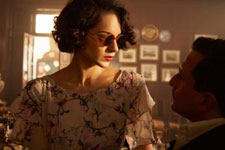 Josh / fullhyd.com
EDITOR RATING
8.5
Performances
Script
Music/Soundtrack
Visuals
8.0
10.0
7.0
9.0
Suggestions
Can watch again
Yes
Good for kids
No
Good for dates
Yes
Wait to rent it
No
See, this being my hundredth review and all, I guess I can take a bit of a break and write a personal and possibly emotional piece. I think the editor will let it pass.

I grew up, like most of us, being told that there's a certain way of doing things. You gotta stand in the queue, toe the line, and get ahead. You are praised when you get ahead in the queue faster than others - irrespective of how you achieve that advancement. Whether your dad knows people who're already ahead in the line, or whether you equip yourself with great skill - even if the skill is con art. The point is to get ahead.

But if you had imagination, you could get away. You needn't be stuck with the rest of us - you could hover, you could fly, or you could sink. Imagination does indeed take you away from the line - but you still need skill to be able to survive. And that combination of skill and imagination was what I saw in Rangoon.

A love triangle between a Parsi filmmaker Billy Moria (Khan) who has a mechanical right hand (he presses a button to open the palm out for a handshake), a Hindu movie star Miss Julia (Ranaut) who is a national heart throb but is utterly in love with her still married mentor, and a Muslim soldier Nawab Malik (Kapoor) who is given the thankless task of protecting Miss Julia.

All of this in 1941 when the INA (Subhash Chandra Bose's Azad Hind Fauj) was approaching the Indian border from Rangoon (Myanmar). British Major General Harding (Richard McCabe) - who loves everything Indian but only as long as India remains a colony - wants Julia to perform for his army camps near the border. And of course, the plot thickens at the border.

I usually balk at a plot like that. I know the director thinks the plot is thickening but usually it's just my skin after watching hordes of failed films where ambition isn't met with work. Too often, the filmmaker believes that just the premise and the stars are enough to make you buy their conceit. It, sadly, isn't enough. A lot of our biopics fall in this cove. Including most films of Madhur Bhandarkar, Rakeysh Omprakash Mehra, Ketan Mehta, Ashutosh Gowariker... and the list goes on.

Which is why I like a film like Detective Byomkesh Bakshi or even Bhardwaj's own Matru Ki Bijlee Ka Mandola because I know there's quite some work thrown into them. These directors have strayed from our queue and they're doing something richly different.

Except, I also know those films struggle to garner a semblance of functional cinema. There's imagination but not enough skill to sustain it. It is not my place to tell what went wrong with these films, but I can surely claim they're off. No one's walked out of the movie hall certain that they loved the movie.

But I loved Rangoon. It felt like being five years old and getting the side lower berth on a night train journey. And mum let me stay awake! So I sit there with the wind slapping on my face. Observing how the trees and houses near me are zipping past. While at a distance, the lights in the village over there are moving slowly. And at a much greater distance there's the moon, fixed in the sky and transfixing.

A lot of Rangoon zips past (I didn't realise it was 2 hours 47 minutes till I sat down to type this review), and I was very much running with it. The basic plot could be familiar, but how it plays out is anything but. Events keep happening that you can't imagine outside of a Vishal Bhardwaj film. There's a delicious stretch where Malik and Julia hold a Japanese soldier hostage and try to find their way back to friendly shores. The Jap and Julia talk to each other in their respective languages, make music, and share Sake (Japanese alcohol made from rice). And when the soldier tries to run, Julia is so offended and yells at him "Aren't we friends?!"

Give me more of this, please. Write these weird situations, cast these amazing actors, and let them play. Ranaut's vulnerable confidence alone is enough to validate the film. But the others aren't far behind. Khan grimaces touchingly. Kapoor wears his maturity as a sheer veil on his mischief. Richard McCabe, Saharsh Shukla, Satoru Kawaguchi are all pitch-perfect in their respectively well-etched roles.

Bhardwaj fills his film with quirky songs, a bejewelled and possibly enchanted sword, air raids, opium bribes, deep friendships, deeper allegiance to the soil... and they all work! This film is not Matru Ki Bijlee Ka Mandola. It doesn't feel schizophrenic. It doesn't feel incongruous. It flows like a stream down a hill - fast, steady, and convoluted.

Pace aside, I often found myself slowing down to look at the details. Like how a black night frame is lit in amber fire and I just want to see those faces in that glow. Or like how Bhardwaj's version of Jana Gana Mana plays out - stirring, yet disarming. All too often, the frames and the score knit into each other like they were conceived together in the same beautiful mind. And that beautiful mind, even with its scars, shines bright at anyone who cares to look into the window to its world.
Share. Save. Connect.
Tweet
RANGOON SNAPSHOT 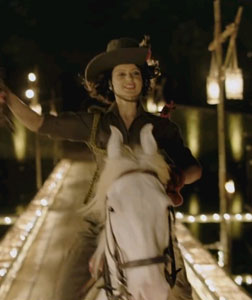 See Rangoon full details
RANGOON USER REVIEWS
1 - 3 OF 3 COMMENTS
POSITIVE  |  NEGATIVE |  NEWEST  |  OLDEST  |  MOST HELPFUL  |  LEAST HELPFUL
RV on 5th Mar 2017, 1:26am | Permalink
Very well written Josh. Indeed the movie was poetic, an intense touching one. Sad it isn't collecting the moolah it deserves for the immense effort that must have gone into creating this gem
Josh on 5th Mar 2017, 3:46am | Permalink
Thanks, RV :)

ADVERTISEMENT
This page was tagged for
rangoon movie 123 movies
Rangoon hindi movie
Rangoon reviews
release date
Saif Ali Khan, Shahid Kapoor
Follow @fullhyderabad
Follow fullhyd.com on
About Hyderabad
The Hyderabad Community
Improve fullhyd.com
More
Our Other Local Guides
Our other sites
© Copyright 1999-2009 LRR Technologies (Hyderabad), Pvt Ltd. All rights reserved. fullhyd, fullhyderabad, Welcome To The Neighbourhood are trademarks of LRR Technologies (Hyderabad) Pvt Ltd. The textual, graphic, audio and audiovisual material in this site is protected by copyright law. You may not copy, distribute, or use this material except as necessary for your personal, non-commercial use. Any trademarks are the properties of their respective owners. More on Hyderabad, India. Jobs in Hyderabad.