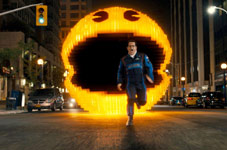 Nupur Barua / fullhyd.com
EDITOR RATING
3.0
Performances
Script
Music/Soundtrack
Visuals
4.0
3.0
5.0
7.0
Suggestions
Can watch again
No
Good for kids
Yes
Good for dates
No
Wait to rent it
No
Pixels, an animated short feature by Patrick Jean, inspired Adam Sandler to think of a full-length feature along similar lines. In the animated film, less than three minutes long, elements of the classic video games of the 1980s take over Earth, reducing the planet to one large pixel in space. Columbia Pictures and Adam Sandler obviously wanted something with a less depressing outcome, and so they set out to produce what looks like one of the biggest disasters of the year. And to think that the concept is such a brilliant one.

Adam Sandler's movies are not known for their superiority of content, although some of them have heart (remember 50 First Dates, for example?). The man just does not give up, though, and having turned producer a while ago, inflicts upon us some rather lame excuses for movies. He has, with the help of Chris Columbus (best known for directing a few Harry Potter and Percy Jackson movies as well as Mrs Doubtfire and two Home Alone films), destroyed whatever potential Patrick Jean's little movie had.

A revisit to the cult 8-bit video games is the only saving grace of Pixels, the feature film. For those familiar with those arcade games, be prepared to see, in 3D, some old favourites, such as Donkey Kong, Galaga, Tetris and Pac-Man. The story begins in 1982, when an arcade-game world championship is video-recorded to be sent into space in a time capsule. The winner of the championship is the self-declared Fire Blaster, Eddie (Andrew Bambridge), who defeats the very talented Sam Brenner (Anthony Ippolito).

Cut to the present, and Sam (Adam Sandler) is a software installer, whose childhood friend Will Cooper (Kevin James) has become the President of the United States. Will is not a popular President, mostly due to his lack of vocabulary. Eddie (Peter Dinklage) is in prison. During one of his house visits, Sam meets the newly divorced Violet (Michelle Monaghan), and her son Matty (Matt Lintz). He is immediately attracted to her, but they engage in a game of one-upmanship.

In Guam, a military unit is attacked by a foreign power. On closer inspection of the recorded video, the President realises that the footage looks suspiciously like a Galaga video game. He calls Sam into an Emergency Top Secret meeting at the White House, where the former discovers that Violet is a Colonel. A video by aliens, who use images of pop culture icons to deliver their message, tells them that the planet is in danger, and that they have to successfully defeat the larger-than-life elements of video games elements in three rounds to be allowed to live in peace.

The decision is made. Sam, Will, Eddie and Ludlow (Josh Gad), all of whom were participants of the world championship in 1982, will have to team up as the Arcaders, along with Violet, to defeat the giant Pac-Man that eats up everything with alarming speed, the Tetris blocks that eliminate buildings one storey at a time, and finally, Donkey Kong. If they fail, Earth will be shattered into pixels.

The prologue, set in 1982, is the best part of the movie. After that, everything becomes pretty much standard predictable fare. There are romance, comedy, adventure, emotion, and not-so-clever placements of characters that will either tug at your heart or become cardboard villains. All's well that ends well, as you would expect, but the route leading to the happy ending is peppered with bad and tasteless jokes, mostly sexist, and plenty of destruction. At times, it is almost too violent for children. The screenplay is badly written, and more likely than not to make people cringe at their nostalgia for those wonderful days of arcade video games.

Adam Sandler is plain irritating, as he is in most movies lately. His attempt to come across as adorable is futile, and we think he should stick to voiceovers for animated films. Kevin James is definitely more attractive, but he does not have much to do except act stupid. This is Peter Dinklage's worst performance in a long time, and he likely did it for money (it could not be for fun, because there is not much of it here). The fact remains that he is the bigger star now in an Adam Sandler movie. Michelle Monaghan is, like her co-star, not very endearing. Brian Cox is wasted.

Watching giant versions of 2D 8-bit video games characters on screen is slightly unnerving, especially in 3D. The graphics are seamlessly woven into the main visuals, so that is a relief, but the constant action is sure to give you a thundering headache. In addition to the lazy writing, the cinematography, music and editing are below mediocre, and not much can be said about the production design or costumes.

Pixels is a difficult movie to watch. Although it is seemingly aimed at younger audiences, and at those who are nostalgic about classic video games, it is not very entertaining, and you can safely skip this one.
Share. Save. Connect.
Tweet
PIXELS (3D) SNAPSHOT 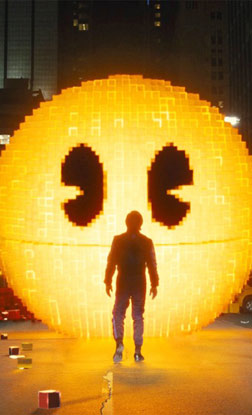 ADVERTISEMENT
This page was tagged for
Pixels (3D) english movie
Pixels (3D) reviews
release date
Adam Sandler, Kevin James
theatres list
Follow @fullhyderabad
Follow fullhyd.com on
About Hyderabad
The Hyderabad Community
Improve fullhyd.com
More
Our Other Local Guides
Our other sites
© Copyright 1999-2009 LRR Technologies (Hyderabad), Pvt Ltd. All rights reserved. fullhyd, fullhyderabad, Welcome To The Neighbourhood are trademarks of LRR Technologies (Hyderabad) Pvt Ltd. The textual, graphic, audio and audiovisual material in this site is protected by copyright law. You may not copy, distribute, or use this material except as necessary for your personal, non-commercial use. Any trademarks are the properties of their respective owners. More on Hyderabad, India. Jobs in Hyderabad.