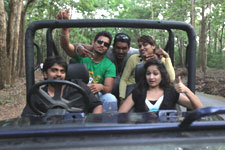 Kritika Deval / fullhyd.com
EDITOR RATING
4.5
Performances
Script
Music/Soundtrack
Visuals
5.0
4.0
6.0
6.5
Suggestions
Can watch again
No
Good for kids
No
Good for dates
Yes
Wait for OTT
Yes
When a movie starts with a furious chase, a murder mystery, and the hints of a political conspiracy, it can't be too much to expect that the story not degenerate into a generic slasher flick, where all evil is explainable by virtue of the slasher's "psycho"-ness. But then again, perhaps it is.

In the closing credits of Aravind 2, director Shekhar Suri names the iconic Friday The 13th as his inspiration. And true to the claim, nearly an hour spent over character-establishment later, a masked man with a machete slices said characters into pieces, rendering said establishment futile.

Aravind 2 is basically the story of Aravind (Sri), who is on the run from a bunch of goons, and apparently from the law, and happens to be in the right place at the right time. As he hides on the sets of a movie in Goa, the director (Srinivas Avasarala) "discovers" him for his movie.

Coincidentally, the next location happens to be the Dandeli forests in Karnataka, the very place where six of Aravind's friends, including his girlfriend, went missing six weeks ago, and for whose alleged murder he is now wanted.

The director, however, being the smart filmmaker that he is, knows exactly what happens in remote forest cabins to which the only way is by foot, and hence, decides to spare his team ignominious, painful death, and us, the assault on our senses. They all go back to Goa, and Aravind to jail, and the slasher suffices himself with whatever stray prey he finds.

Ha! Gotcha! As if things are ever so tidy!

What really happens is that they go to the remote forest cabin, and start dying in ignominious, painful ways; and the assault on our senses is two hours long. Especially if you're in a single-screener. The slightly deranged audio, although impressive, literally hurts if the audio capabilities of the theatre don't match up.

The good part? The cinematography and the screenplay are also slightly deranged, making for some really, really fun moments once the killing begins. The ridiculous back story given to the villain is nothing but a necessary, and perfunctorily executed, part of the film, written to establish that the villain is crazy, and, thus, not to be restrained by such silly necessities as the plot, or even common sense.

The performances don't do much to interfere with the blood and the gore, either, although Avasarala and Kamaraju do a commendable job, given the limitations. As far as the girls are concerned, they could've been replaced by well-endowed blow-up dolls that can scream, and no one would've noticed the difference.

A little into the second half, though, you'll be hard put to find a reason to finish watching the movie, or even stay seated. It all just gets too loud, too chaotic, too much like someone scratching on a black board.

We can give you one, though. You can play "Which movie's that from?". We spotted death scenes lifted from Wrong Turn, The Hills Have Eyes, House Of Wax, and, of course, Friday The 13th.
Share. Save. Connect.
Tweet
ARAVIND 2 SNAPSHOT 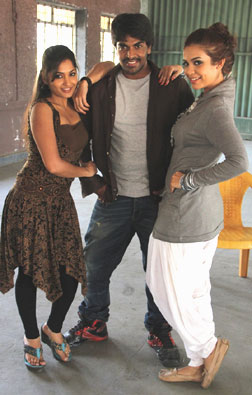