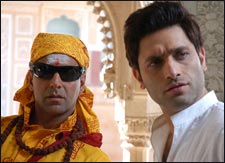 Samrat Sharma / fullhyd.com
EDITOR RATING
5.0
Performances
Script
Music/Soundtrack
Visuals
NA
NA
NA
NA
Suggestions
Can watch again
NA
Good for kids
NA
Good for dates
NA
Wait to rent it
NA
First, let's make this clear - despite whatever the Priyadarshan name tag or the casting of the film might have you believe, Bhool Bhulaiyaa is most definitely not a comedy. Instead, it is a remake of Manichitrathazhu, the 1993 Malayalam hit, which we know better as the film that was remade as Chandramukhi in 2005.

Let us make this clearer still - though Bhool Bhulaiyaa remains an almost note-to-note and extremely faithful remake of Manichitrathazhu, if there were a DVD available with the same price as the movie tickets, we would without a doubt recommend the latter.

This is not to say that the current adaptation (there was also a Kannada remake) doesn't have merit. This is to simply say that despite surrounding himself with almost the best talent around, Priyadarshan's handling of the film remains a loose end that never gets tied for the duration of the film. Even without any comparison with the versions that came before, Priyan's film is a great concept which, true to his form of late, is a mess in execution.

The story is fairly interesting - Siddharth (Shiney Ahuja) is the princely heir of a large palace somewhere vaguely in Rajasthan. Working as a... no one knows what exactly, in America, he comes to his hometown after getting married to Avni (Vidya Balan).

The newly married couple move in to their palatial house, despite the warnings of curses, ghosts and the assorted bhootiya warnings from uncles Badrinarayan (Manoj Joshi) and Batukeshwar (Paresh Rawal).

Ah, but the kids are not just educated, they from America! So they promptly move in, the wife breaks a forbidden lock and learns of the atrocities an erstwhile king committed on his courtesan, and all hell breaks loose. Suspicion falls on Badrinarayan's adopted daughter (Amisha Patel) as being possessed with the ghost of the courtesan.

Sigh. This, and some random but pointless buffoonery by Rawal, Asrani and Rajpal Yadav chew up most of the first half, and still no sign of Akshay or the ghost. After things come to a head, Siddharth calls his friend, a psychiatrist, for help. Enter Aditya (Akshay Kumar, finally) and cue intermission. This is the first half, and the problem with Bhool Bhulaiyaa.

The film tries to set things up for the second half, where the meat of the film lies, and we are asked to hold on to our interests by... what exactly? There is absolutely nothing that happens in the first half that cannot be fit into a half hour before letting the proceedings get really interesting. When the actual ghostly singing and dancing in the night begins, and when Akshay begins to investigate it, THAT is when the film picks up pace.

To its merit, once the film begins unraveling the mystery, it does not slacken its pace even for a breather. Everything becomes fodder for interesting theories, and every frame is crammed with hints to the real mystery. The hitherto dull screenplay suddenly shines up with some very nice twists, serving to never draw focus from the real deal - the plot (the dialog is till painful, though).

The film races towards the climax, and the fact that Akshay is now in control of the proceedings helps. Did we mention that the dialog is fairly poorly written? Well, even so, Akshay just breezes past with a confidence and presence that works despite the writing. He has helped Priyan out of more than a few soups, and this time, too, he takes the reins, and never lets go, anchoring your attention and channeling his energies into making his character stand out.

I mentioned earlier that Priyan has surrounded himself with the best talent. With the exception of Neeraj Vora's screenplay, and some odd acting by some of the cast, the film remains technically top notch. The sound design especially, by Sandeep Chowta no less, is the bee's knees, and someone in the Ramu camp should take notes.

The weak links, then, are Shiney Ahuja, who is most definitely hamming it up for a quick cheque, and Rajpal Yadav, who is given a thankless role, and mocks it by giving a thankless performance. The real revelation is Vidya Balan, who takes over a National Award winning role from the original, and measures up to it. Her performance, despite the very worst climactic song ever, is extremely in sync with the revelatory nature of the third act, and needless to say, pretty much awesome. Seriously, goose bumps and all that.

Even so, despite Akshay's ample histrionics, Vidya's spirited third act output, and some technical sheen by the sound, art, and cinematography departments, it's the poor direction, and the very trite and shopworn screenplay, that mar the film. The movie has some good things, but as a sum of its parts it doesn't measure up. As RGV Ki Aag showed, remaking a film takes more than just love for the original.

Strictly for people who don't get tickets for something better.
Share. Save. Connect.
Tweet
BHOOL BHULAIYAA SNAPSHOT

ADVERTISEMENT
This page was tagged for
Bhool Bhulaiyaa hindi movie
Bhool Bhulaiyaa reviews
release date
Akshay Kumar, Vidya Balan
theatres list
Follow @fullhyderabad
Follow fullhyd.com on
About Hyderabad
The Hyderabad Community
Improve fullhyd.com
More
Our Other Local Guides
Our other sites
© Copyright 1999-2009 LRR Technologies (Hyderabad), Pvt Ltd. All rights reserved. fullhyd, fullhyderabad, Welcome To The Neighbourhood are trademarks of LRR Technologies (Hyderabad) Pvt Ltd. The textual, graphic, audio and audiovisual material in this site is protected by copyright law. You may not copy, distribute, or use this material except as necessary for your personal, non-commercial use. Any trademarks are the properties of their respective owners. More on Hyderabad, India. Jobs in Hyderabad.