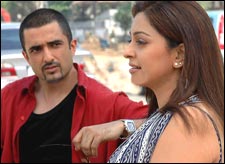 Samrat Sharma / fullhyd.com
EDITOR RATING
5.0
Performances
Script
Music/Soundtrack
Visuals
NA
NA
NA
NA
Suggestions
Can watch again
NA
Good for kids
NA
Good for dates
NA
Wait for OTT
NA
If there is one thing I have come to understand about the human condition after all of my 20-odd years on earth, it is this: we are all creatures of randomness. There is an inherent random behavior in our lives, and a moment, sometimes any moment, can change lives forever. However careful and planned your life may be, one stochastic moment, and everything changes.

Using this as a tool, not as subject, writer-director Onir's second film tries to construct a complex web of human emotions and relationships in telling the story of five individuals. All acquainted by simple fate, divided by their personalities and intricately bound by one moment that changes everything.

Nikhil (Sanjay Suri) is a happy-go-lucky, and well-to-do orphan who is close friends with Rahul (Jimmy Shergill). Nikhil meets intriguing Anamika (Urmila Matondkar) one night in a club, and there is instant chemistry between them. He becomes besotted with her, and visits the club often in hopes of getting to see her again. He discusses his infatuation with Rahul, and Rahul's business associate Steve (Rehan Engineer), when the trio meet for regular bouts of basketball.

Steve has a dark secret that Rahul tells Nikhil about - he is an alcoholic and beats his wife Ira (Juhi Chawla). As a prank, Anamika visits the club chaperoned by her overprotective and creepy boss. A scuffle breaks out between him and Nikhil, in which the latter takes a pistol out. The rough-and-tumble takes a dark turn when Steve and Rahul intervene, and a shot is fired by Nikhil, which hits Rahul.

This ek pal becomes the pivot of the film, as we must keep coming back to this dark night to further unravel the layers of what happened, and how it changed the lives of the five people the story is about. There are layer upon layer of machinations and half-truths, and each character has a deep dark secret that comes tumbling out after each revelation. True to the dispiriting nature of the plot, the characters are all grim and have their own weaknesses and shades of gray.

To tell the truth, I found the whole plot of the film fantastically lending itself to the study of relationships, and the fragility that they bring with them, not to mention topical in times of the changing urban balance in relations. The sad truth, however, is that the film could not make me forget that the plot is lifted straight out of Pedro Almodóvar's 1997 film, Carne Trémula. The adaptation does away with political commentary and infuses a more fragile aspect to it by making all the characters friends to begin with, but it still uses the same plot, and it jars.

Onir has some talent in scriptwriting, and he makes his characters very real, and the travails they go through come across as convincing. On the other hand, he is also guilty of shoddy direction as he cannot control the pace of the film, and struggles hard to create a foreboding atmosphere. Not to mention the fact that he cannot give his actors any direction vis a vis their characters, beyond the written word.

This is a complex, layered plot, and yet the characters largely confine themselves with being cardboard cutouts displaying the requisite emotions to push the plot forward. There is no depth or sub-text to the performances, and for a film exploring relationships, that is criminal. While most of the blame for that should go to the director, some should also be shared by the leads.

Suri's is the character that the whole film hinges on, and is the biggest letdown. His obsession with Anamika never fully realizes, and he blubbers his way through most of the scenes. He has the strongest moments in the film, and you wish for him to have more talent every time. Urmila turns up with a performance that is restricted to making silly faces and weird throaty noises.

Jimmy balances his act with some restrained moments marred by some bored expressions, and Engineer seems miscast. His love for Ira never comes across as convincing. Juhi is the most seasoned of the lot, and come up trumps. Her performance, though mostly lacking in any presence, at least is consistent and balanced.

But as mentioned earlier, most criminal is the director's complete lack of control over his craft and the ability to infuse any sub-text into his plot. However borrowed, the plot has great potential, and as such is well-adapted to suit the urban Indian milieu. Yet it is let down by an untalented director, and a cast of actors who truly have no room to add depth to their performances.

The fact that this film is seeing a release here much after the all-India release, so much so that the DVD is available, just begs the question - should you watch it? Well, if a director who doesn't try and actors who don't care are not any hindrance to you enjoying a decent story, sure. Otherwise, rent the DVD. Better yet, look for the original.
Share. Save. Connect.
Tweet
BAS EK PAL SNAPSHOT

ADVERTISEMENT
This page was tagged for
Bus ek pal full movie
bas ek pal full movie on 9xmovies
Bas Ek Pal hindi movie
Bas Ek Pal reviews
release date
Follow @fullhyderabad
Follow fullhyd.com on
About Hyderabad
The Hyderabad Community
Improve fullhyd.com
More
Our Other Local Guides
Our other sites
© Copyright 1999-2009 LRR Technologies (Hyderabad), Pvt Ltd. All rights reserved. fullhyd, fullhyderabad, Welcome To The Neighbourhood are trademarks of LRR Technologies (Hyderabad) Pvt Ltd. The textual, graphic, audio and audiovisual material in this site is protected by copyright law. You may not copy, distribute, or use this material except as necessary for your personal, non-commercial use. Any trademarks are the properties of their respective owners. More on Hyderabad, India. Jobs in Hyderabad.