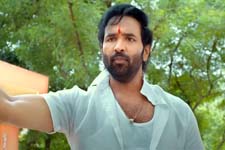 T J Reddy / fullhyd.com
EDITOR RATING
2.0
Performances
Script
Music/Soundtrack
Visuals
3.0
1.0
1.0
2.0
Suggestions
Can watch again
No
Good for kids
No
Good for dates
No
Wait for OTT
Yes
I can see the conversation between the writers of this film taking place. Collection King Dr. Mohan Babu would have asked Kona Venkat (they're the credited writers of this cinematic experience) if he had another story like Dhee, which would aid his son's ailing career. You could excuse the former for assuming that a script akin to one written over 15 years ago would work today because desperate times call for desperate measures.

The veteran writer would have responded that he had a discarded confusion drama from his glory days that he couldn't produce. People liked it then; they could enjoy it now, right?

This indecision would have given them some pause. We can't risk failure; they'd have said in that initial sitting. We need to add more elements that put butts in seats. People really liked Pushpa, so let's set the film in Chittoor and have our characters call each other "Macha". The audience also wants big hero introduction songs and fights that happen for no reason, right? Viewers enjoy psychotic characters and love stories, so why not throw them in there? And most of all, everyone loves t**s. Let's assure our fanbase of that element by casting Sunny Leone.

Now, let's blend all these ingredients, throw away the juice, and serve the people a lot of peel and a tiny amount of pulp. After these steps, we achieve our goal of making some sweet profits.

I wasn't physically present for this discussion, of course, but the truth can't be far away from this.

Ginna is a film starring Manchu Vishnu in the titular role. In his childhood, he had a deaf and mute friend named Renuka. They were the best of friends because he once bought her a whistle as a means of communication. Renuka, a rich NRI, doesn't know sign language, but that's beside the point. One fine morning, she leaves Ginna and his ragtag band of friends and returns to America. Ginna stays in his village, runs a small business, and loads himself with debt while riding a spanking new Royal Enfield.

Decades later, Renuka returns looking like Sunny Leone. She's a multi-millionaire and wants to marry debt-ridden Ginna. But wait, all is not what it seems with her. Also, Ginna aspires to become the president of the village.

If you're annoyed at this plot synopsis and its lack of direction, I'd like to inform you that Ginna is in love with his childhood friend, Swati (Payal Rajput). How do they tell Renuka about their situation while needing her help? Also, there's more story to tell.

I'll spare you the bore-y details as I wouldn't want to lose our readers by testing their patience. But the filmmakers here didn't show me such mercy. They assumed a throwback to older stories would create a nostalgic laugh riot for the audience. However, to mask one's lack of creativity, old wine needs to be packed in new bottles, or the old bottles need to have sentimental value. Neither the script, nor the filmmaking, nor the star has either.

We aren't arbiters of morality, but we know the reasons for Sunny Leone's casting. However, a fine line exists between titillation and sleaze. Shooting an actor from the top down or, somehow worse, bottom-up while the "hero" spouts Jai Sri Ram every so often is whiplash-inducing.

Speaking of Mrs. Leone, her career is a living example of how one gets typecast. We couldn't tell you if she has any acting chops as she's never allowed to perform. If we don't let her try, how do we know if she has more to offer?

Similarly, our misgivings about our miscast leading man aren't without merit. He needs to be able to perform sick dance moves, beat up a thousand people, and save the day, even while this pigeonholing works against him. Manchu Vishnu is at his best when he isn't trying to be Pushpa or Prabhas. His disappearing Chittoor accent makes for cringeworthy viewing.

I revisit Dhee to this day as I enjoy his chemistry with veteran character actors and comedians who make average scripts, fun, and decent material, immortal. There are a few actors of that ilk here, and the brief moments they slip in and out of the film are fun. However, watching them trying to harness a consistent tone of joy out of this material is akin to watching a man with no arms trying to harness sand in the desert.

The auditory or visual stylings of the film aren't oases either. Generic songs, a horrendous score, flat cinematography and lighting, and a general sense of "yeah, good enough" permeates every frame.

In an interview, Adivi Sesh spoke about how S S Rajamouli and his team spent an entire day planning to get one shot right. In this film, the makers axed their item girl midway through the song as they'd forgotten to offer Mrs. Leone an item song of her own in this movie. She awkwardly jammed into that song like every other focus-tested element in this film.

As we hypothesized earlier, the creators of this film would have spent a lot of time making sure this project turned out to be a surefire hit. However, did they realize at any point that spelling it Ginna would lead the audience to assume the film was about a bowl? We were supposed to pronounce it as Jinnah, but we can't spell it like that because - you know, Pakistan. This title is in service of a throwaway joke. It isn't innovative enough to hang your hat on.

We have a suggestion - why not alter things when you have an idea that isn't quite working? Why stick with the first draft? Why throw yourselves to the wolves by putting out material like this? And because we care about the makers of this film: why are you teasing a second part when you didn't have enough of a story to make a first? 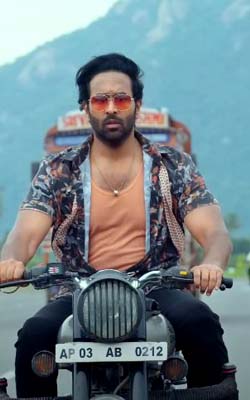 ADVERTISEMENT
This page was tagged for
Ginna telugu movie
Ginna reviews
release date
Vishnu Manchu, Payal Rajput
theatres list
Follow @fullhyderabad
Follow fullhyd.com on
About Hyderabad
The Hyderabad Community
Improve fullhyd.com
More
Our Other Local Guides
Our other sites
© Copyright 1999-2009 LRR Technologies (Hyderabad), Pvt Ltd. All rights reserved. fullhyd, fullhyderabad, Welcome To The Neighbourhood are trademarks of LRR Technologies (Hyderabad) Pvt Ltd. The textual, graphic, audio and audiovisual material in this site is protected by copyright law. You may not copy, distribute, or use this material except as necessary for your personal, non-commercial use. Any trademarks are the properties of their respective owners. More on Hyderabad, India. Jobs in Hyderabad.