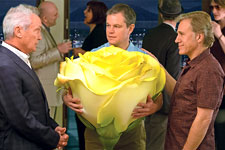 T J Reddy / fullhyd.com
EDITOR RATING
4.5
Performances
Script
Music/Soundtrack
Visuals
6.0
4.0
7.0
7.0
Suggestions
Can watch again
No
Good for kids
No
Good for dates
No
Wait to rent it
Yes
Alexander Payne's solution to the world's environmental problems is so crazy that it just might work. He'll be showered with prizes both Nobel and otherwise while being offered the key to the world. Watch him and weep.

In Downsizing, co-writer/director Alexander Payne proposes a remedy to global hunger, poverty, climate change and population explosion. In simple words, he suggests that we reduce the size of the humans so that they, in turn, reduce the size of the negative footprint they leave on the world. Too much like Honey, I Shrunk The Kids, you say? You didn't stop his movie now, did you?

The story of Downsizing, a film set in the future, is that of Paul Safranek (Matt Damon), a middle-aged, middle-class man going through a mid-life crisis. Paul works his moderately menial job and is one half of a loveless marriage with Audrey Safranek (Kristen Wiig). After a chat with his friend Dave Johnson (Jason Sudeikis) who underwent the downsizing process - an irreversible process invented 15 years back whereby humans are shrunk to a height of five inches, and whose intent is to reduce waste and thus help the environment - and vouches for it since it also helps him cut financial expenses, Paul decides that he wants to go for it, too.

Paul convinces his wife Audrey to make the transition with him, but after he has first undergone the process, she opts out and abandons him, which leaves him downsized and divorced. He settles into a colony for the small people and now has to work to better his quality of life with a more unseen and unnerving threat to his existence waiting right around the corner.

Interesting premises are the bread of sci-fi cinema, but the butter comes with how eloquently these premises and the themes hidden in them are explored. A well-written film with fully-rounded characters and plot threads smears itself smoothly on that well-baked slice of bread, but sadly, Downsizing does not have high-quality butter at its disposal. The moderately-fresh baked good is made almost inedible by the toppings it gets over the course of an over two-hour runtime.

Indeed, despite the innovative theme, Downsizing's first half is a mish-mash of one contrived plot point after another. These beats have been done to death, and the characters acting them out aren't quite original, either. Their problems seem superficial and hence do not elicit too much empathy. The only exception is the character of Ngoc Lan Tran played by the effervescent and exquisite Hong Chau. Tran is excellently etched out over a series of clever scenes that work at breaking the pre-set mould of a social activist. Her tragic circumstances and her drive to overcome her hurdles make her the only character that deserves a modicum of empathy, and the theme of making the world a better place rings true when Tran is used as the conduit to get the message across.

Matt Damon, Christoph Waltz and Udo Kier spend an inordinate amount of time critiquing the politics and mind-sets of both the liberals and conservatives in equal measure. They are A-list actors with a landfill of experience under their belts and hence infuse a certain level of charm to their characters. However, when all four of the main characters share scenes, the scathing critiques put forth by the trio of men which covers everything from immigration policies to wealth gaps, oppressive governments and dated thought processes rings hollow. The men are only as good as the movie allows them to be, and the solitary woman is reaching for something higher. The disparity in character work cannot be overlooked.

While it is deeply unsatisfying to see a filmmaker of Payne's calibre falter from a writing standpoint, his technical nuances retain their high standards. Payne's attention to detail when chronicling the process of Downsizing alone is miles ahead of what most ordinary filmmakers aspire to when helming sci-fi films. The camerawork and editing show the passage of time quite effectively, and in the process subtly reinforce some of the more damning themes addressed by the film.

The film's quirky score and the altered pitches of the voices emanating from the little people's lips combined with some excellent visual effects, shots filled with forced perspectives and sets textured to appear more like playsets instead of fully formed brick and mortar houses make for a unique viewing experience.

However, the whole is not as spellbinding as the sum of its parts. The film relishes in addressing all segments of the audience and reminding them that neither Woodstock nor Klan rallies last forever. While this outer shell might appear compelling enough, a peek under it reveals that the movie erred in its choice of the main character. Payne's insistence on sticking to his trope of shooting philosophical jargon off the shoulder of a middle-aged man seems out of place in his progressive work of not-so-inspired science fiction.
Share. Save. Connect.
Tweet
DOWNSIZING SNAPSHOT 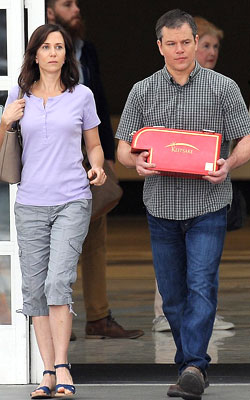 ADVERTISEMENT
This page was tagged for
Downsizing english movie
Downsizing reviews
release date
Matt Damon, Christoph Waltz
theatres list
Follow @fullhyderabad
Follow fullhyd.com on
About Hyderabad
The Hyderabad Community
Improve fullhyd.com
More
Our Other Local Guides
Our other sites
© Copyright 1999-2009 LRR Technologies (Hyderabad), Pvt Ltd. All rights reserved. fullhyd, fullhyderabad, Welcome To The Neighbourhood are trademarks of LRR Technologies (Hyderabad) Pvt Ltd. The textual, graphic, audio and audiovisual material in this site is protected by copyright law. You may not copy, distribute, or use this material except as necessary for your personal, non-commercial use. Any trademarks are the properties of their respective owners. More on Hyderabad, India. Jobs in Hyderabad.