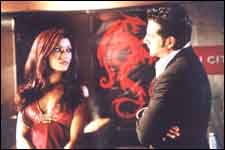 EDITOR RATING
5.0
Performances
Script
Music/Soundtrack
Visuals
NA
NA
NA
NA
Suggestions
Can watch again
NA
Good for kids
NA
Good for dates
NA
Wait for OTT
NA
The prime redeeming feature of a movie whose script cleverly and continuously misleads its audiences, is the latter still thinking about it on their ways home and finally uttering an effervescent “Hmmm…!” as they finish connecting the dots, at the ingenuity with which every scene now fits in. Ek Khiladi Ek Hasina makes up for all that with plenty of schmatzy visuals, slick dialogue and smouldering songs, so that when reality dawns, you hold no grudges.

There’s really no “Ek Haseena” in Ek Khiladi Ek Haseena - it’s just Koena Mitra in self-effacing clothes, and needing Gulshan Grover to endorse her with a “Never underestimate a woman’s intelligence.“ Aside of that, she just smooches and callously sleeps with Fardeen Khan, in a brazen statement of Bollywood’s waxing comfort with instant sex. Of course, the film makes up for its sins in the end with some quasi-legitimization, but that’s perfunctory, and hardly the message that lingers in the young minds that’ve forgotten even the pop-corn bags as they gape at the screen.

But that’s getting ahead of ourselves, so this is how the yarn unfolds. Arjun Verma (Fardeen Khan) is a con artist whose comrade-in-arms is murdered after the “one-last-heist”, when they’ve mistakenly swiped loot off a henchman of Sikander (Gulshan Grover), a don who can smell an opportunity to murder from a mile away. Sikander tells Arjun he can live if he returns the dough – Rs. 3 lakhs + Rs. 1 lakh in interest – in ten days, and plants his right-hand Kaif (Kay Kay) on Arjun’s tail.

Recognizing an opportunity to continue living when he sees one, Arjun plans an elaborate con with Natasha Kapoor (Koena Mitra), a psychiatrist who is taken in by his charm, his confidence and his well-written dialogues. Where she shines in is hard to explain without giving the plot away. Actually, saying anything about this movie is hard without giving the plot away, so we’ll stick to this: we now know beyond doubt that at least 90% of Koena Mitra’s body has skin on it.

Arjun delivers in just 9 days, but like all performance-oriented dons, Sikandar is quite encouraged by his meeting his deadline, and now sets higher targets – he tells Arjun to clean up Rs. 25 crores from the wealth of Jahangir Khan (Feroz Khan), master-crafter and a don of dons himself, in 25 days, or take a slug in his cranium. It’s not hard to tick the right option here, and Arjun braces up for the challenge of his life.

Ek Khiladi Ek Hasina has all the staple of current-day Bollywood – shipshape and Bristol fashion, it has a full buffet of skin and oomph, and features some nightclub music to grind to. If you think Fardeen Khan’s appeal tiptoes beyond his looks, you can even imagine a good performance there. Kay Kay, Gulshan Grover and Feroz Khan do their dew admirably, though a scene where Feroz Khan rumples up the CM is Drivel Central.

Koena is put to use the way all lead women are put to use in a Feroz Khan movie, and there’s a particularly titillating song that goes even beyond those precedents. Only, the chemistry between Fardeen Khan and Koena Mitra is strictly theoretical, which makes all the smooches and the love-making almost raunch. Her acting passes muster, though she has no central role like the title suggests.

The main problem with the film is a rather slow pace, and too many loopholes when you piece together the jigsaw at the end. It’s not an Alfred Hitchcock where everything ties in so seamlessly at the end. Then, there is just one Feroz Khan – Fardeen Khan scene, and that’s also out of place. But on the whole, Ek Khiladi Ek Hasina doesn’t bore you, even if you might not list it in your résumé as your inspiration.
Share. Save. Connect.
Tweet
EK KHILADI EK HASEENA SNAPSHOT

See Ek Khiladi Ek Haseena full details
EK KHILADI EK HASEENA USER REVIEWS
1 - 3 OF 3 COMMENTS
POSITIVE  |  NEGATIVE |  NEWEST  |  OLDEST  |  MOST HELPFUL  |  LEAST HELPFUL
USER RATING
7.5
28 USERS
Performances
Script
Music/Soundtrack
Visuals
NA
NA
NA
NA
Can watch again - NA
Good for kids - NA
Good for dates - NA
Wait for OTT - NA
MEHR RADI on 23rd Jan 2006, 6:32am | Permalink
OK IT WAS INTRESTING AND KEPT U HOOKED ON TILL THE END,BUT BOY WAS THERE MANY PIECES MISSING FROM THE JIGSAW PUZZLE,THERE WERE SOOOO MANY LOOP HOLES IT WAS LIKE ALL LOGIC WAS ERASED.THE FILM WAS SO UN SATISFYING FOR EXAMPLE,WHEN FARDEEN WAS CONNING KOENA INTO GIVING 4 LACKS,OK SO ACTUALLY THEY WERE FOOLING KAIF,BUT THEN WHY DID HER CLIENT COME AND SEE HER TWICE AND WHY WAS SHE WORRIED,THEN SHE RELIZED SHE WAS CONNED SHE WAS VERY UPSET BUT KAIF DIDNT SEE ALL THIS,THAN AFTER THAT SHE WENT TO GET REVENGEAND BEHIND THE DRAPES SHE WAS CRYING,KAIF DIDNT SEE THAT,AND WHY IN THE NIGHTCLUB DID KOENA AND FARDEEN INTRODUCE THEMSELF AND WHY PLAY THAT GAME WITH THE COIN,IT WAS LIKE THERE WAS TWO FILMS,

ADVERTISEMENT
This page was tagged for
haseena movie movies
fardeen khan koena mitra sex scenes
hot fardeen koena love making
hottest bollywood scenes ek khiladi ek haseena
ek khiladi ek haseena nude scene
Follow @fullhyderabad
Follow fullhyd.com on
About Hyderabad
The Hyderabad Community
Improve fullhyd.com
More
Our Other Local Guides
Our other sites
© Copyright 1999-2009 LRR Technologies (Hyderabad), Pvt Ltd. All rights reserved. fullhyd, fullhyderabad, Welcome To The Neighbourhood are trademarks of LRR Technologies (Hyderabad) Pvt Ltd. The textual, graphic, audio and audiovisual material in this site is protected by copyright law. You may not copy, distribute, or use this material except as necessary for your personal, non-commercial use. Any trademarks are the properties of their respective owners. More on Hyderabad, India. Jobs in Hyderabad.