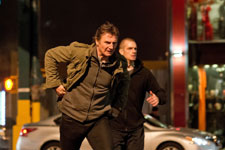 Zehra Abbas / fullhyd.com
EDITOR RATING
6.5
Performances
Script
Music/Soundtrack
Visuals
6.0
6.0
7.0
7.0
Suggestions
Can watch again
No
Good for kids
No
Good for dates
No
Wait to rent it
Yes
Run All Night opens with a scene that shows Liam Neeson lying on the ground, slowly bleeding to death from gunshot wounds. His voice booms into the theatre and he says, "I've done terrible things in my life." After seeing this film, we couldn't agree more with Mr. Neeson.

Neeson plays Jimmy Conlon, a washed up former hitman, who lives on the charity of his friend and boss, mafia don Shawn Maguire (Ed Harris). Nicknamed Jimmy the Gravedigger in his heyday, he is now a shadow of his former self, and discovers a crisis of conscience in his old age. Jimmy is estranged from his family and friends, but a series of bloody events puts him back in the life of his son Michael (Joel Kinnaman).

Michael witnesses a murder that puts him on the hit list of Shawn's cocaine-snorting, off-the-rails son, Danny (Boyd Holbrook). Jimmy is sent, for obvious reasons, to clean up the mess, but ends up killing Danny in order to save his own son. Shawn vows revenge against his former friend and ally, and promises to make him too experience the suffering of losing his child.

The rest of the film is an account of the sixteen hours that follow as Jimmy does his best to save his son. The core of his genius plan is to "run all night". And that's exactly what they do. Throughout the film. No kidding.

The location of the film is New York City by night, and that gives the film a gritty, realistic edge. However, the able cinematography is let down by the quality of the action choreography. The majority of the film is a blur of poorly-executed chase sequences, which get tedious fast, and your attention begins to wander. That's bad news for a film that is essentially one long chase sequence.

All of this action culminates in two major showdowns, and sadly, both are disappointments. One involves a rather unbelievable one-man show as an obviously ageing and unfit former hitman barges alone into the lair of a fearsome mafioso. That one is so trite that it's just plain old boring. The other involves, again, our good friend, the ageing and unfit former hitman, going head-to-head with a ruthless professional hitman Price (Common) who is in his prime. The trouble with this showdown is that it's inadvertently funny thanks to rap star Common's rather disastrous acting debut, and the way the production team outfits him with a ridiculous red laser gun (which makes it easy for Neeson to sight and shoot him) and a mysterious green infra monocle. Go figure.

In the midst of dated and clumsy action, director Collet-Serra tries to up the cool quotient by using an interesting camera technique that involves the camera sweeping from one location to the other in a single take. It does add style to the film's look, but cannot detract from the fact that the camera ultimately zooms bang into the centre of the banality of this heavily formulaic film.

So, Collet-Serra also makes an attempt at adding depth to the characters running all over the place, with half-hearted emotional tracks. Jimmy's damaged relationship with his son Michael is explained perfunctorily through hackneyed dialogue. The "sins of the father" theme is obviously significant to this father-son scenario, but its treatment consists solely of Jimmy stopping his wide-eyed son from shooting anyone by repeatedly yelling "Don't do it, son!" and then promptly blowing some poor guy's brains out. Daddy knows best.

The friendship between Jimmy and Shawn could have been the highlight of the film, what with two seasoned actors involved, but the writing and direction don't create that opportunity. So both men pursue each other violently, their friendship of many years forgotten in the face of Danny's death. But when Shawn is about to die, Jimmy holds him tenderly and Shawn raises a bloodied hand to pat the face of his friend/murderer. So what if these guys spent the entire movie trying to butcher each other before this Disney moment?

The best part of the movie is Liam Neeson. There's nothing new for Neeson fans here but plenty of the fare that he has made his trademark. In rare moments, you see flashes of the brilliant actor hiding behind the Taken formula but he obediently slips back into the tried and tested tropes of this genre. He looks tired and old, and one might argue that he is, well, tired and old, but it begs the question - why is Neeson doing film after film that rehashes the same, tired material?

Joel Kinnaman is a talented actor, and those who have seen his work in the show The Killing and the Swedish film Easy Money will vouch for the Swedish actor's ability. So it's fairly obvious that he signed this film simply for big Hollywood movie exposure.

Ed Harris is colourless and simply not menacing enough as a mafia don, but to be fair the script doesn't do him justice, either. When Harris and Neeson are in the same frame, the audience cannot help but reflect on the talent of both actors and the sad reality that they have been reduced to accepting such uninspiring assignments.

Neeson in particular has done wonderful work in the past such as the critically acclaimed Schindler's List and the commercially successful Star Wars. It makes you wish that he was "Taken" before he did this film.
Share. Save. Connect.
Tweet
RUN ALL NIGHT SNAPSHOT 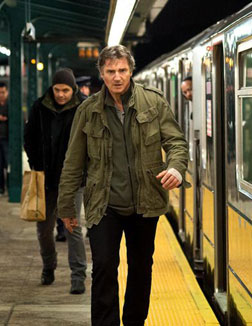 ADVERTISEMENT
This page was tagged for
Run All Night english movie
Run All Night reviews
release date
Liam Neeson, Ed Harris
theatres list
Follow @fullhyderabad
Follow fullhyd.com on
About Hyderabad
The Hyderabad Community
Improve fullhyd.com
More
Our Other Local Guides
Our other sites
© Copyright 1999-2009 LRR Technologies (Hyderabad), Pvt Ltd. All rights reserved. fullhyd, fullhyderabad, Welcome To The Neighbourhood are trademarks of LRR Technologies (Hyderabad) Pvt Ltd. The textual, graphic, audio and audiovisual material in this site is protected by copyright law. You may not copy, distribute, or use this material except as necessary for your personal, non-commercial use. Any trademarks are the properties of their respective owners. More on Hyderabad, India. Jobs in Hyderabad.