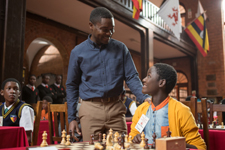 Ajay Kumar R / fullhyd.com
EDITOR RATING
8.0
Performances
Script
Music/Soundtrack
Visuals
9.0
8.0
8.0
9.0
Suggestions
Can watch again
Yes
Good for kids
Yes
Good for dates
No
Wait for OTT
No
A pawn on the battlefield, bloodied and maimed, witnesses the glory of her kingdom fall; but instead of surrendering, picks up the mantle, struggles her way to the last block and becomes The Queen. And if that also looks every bit as rousing as it sounds, it's the effect of the inspired synergy of Mira Nair, Disney and ESPN. Based on true events and American author Tim Crothers' eponymous novel, Queen Of Katwe is a war story in every sense - and one gloriously translated to screen.

The film chronicles the story of the battles of a 10-year-old girl and resident of Katwe, Phiona Mutesi (Madina Nalwanga). Katwe is a large slum dwelling in Uganda, an African nation, parts of which have only begun recovering from a two and a half decade long civil war. Phiona stays along with her mother Nakku Harriet (Nupita Nyong'o) - a single, fierce and protective mother who has a constant look of torment and worry on her face - and brother Brian (Martin Kabanza), sister Night (Taryn Kyaze) and two other brothers. They live under bone-crushing poverty with barely anything to eat.

Phiona's prodigal talent for chess is recognized at the age of 10 by her coach Robert Katende (David Oyelowo), and she is then on trained by him along with her brother, under the ministry's initiative. Robert wants to rid the slum children of their helplessness through sports, and works on building a team of children, "Pioneers", to represent Katwe in local chess championships. He soon prepares them and ace-player Phiona for a school-level chess tournament in the rich city of Budo, where she proves her worth. Amid Robert's inspiring quotes like "a dog runs for food, but a cat runs for its life", Phiona grows into a fine regional champion.

But not all is fine and dandy. Phiona is still a pre-adolescent girl who lives an impoverished life with a wounded mother, and an erratic and pregnant teenage sister. Phiona even faces her first existential crisis when she is constantly reminded that if she doesn't sell maize to make money, she might get sold into the flesh trade, as a lot of Katwe women are. She even forgets chess for a while and goes back to her normal life. But as things worsen, she has to up her spirits and, in Robert Katende's words, realize that she doesn't deserve a life of poverty just because she was born into it.

Mira Nair and Disney do a great job of bringing out the struggles of the people of a nation struggling in the aftermath of war, without painting the entire nation or continent as a region of strife and deprivation. The movie doesn't shy away from showing you the brutal choices the people (especially women) of Katwe make in such a backdrop, but Nair pours freshness and flavour into a life that is riddled with sufferings. The film excels in drawing constant parallels between the chessboard and Phiona's life. However, the editing (Barry Alexander Brown) could have been done better, as the emoting of some of the child actors feels sloppy.

William Wheeler (script) renders strong character arcs in Robert, Phiona and Nakku. Robert, a kind and philanthropic man, gives up his desire to get a government job for the sake of the Pioneers. His charisma is only overcome by his generosity. His coaching abilities give you a glimpse of how the likes of Alex Fergusson perhaps think. The way he trains the children makes him an alchemist more than a coach. He not only teaches Phiona how to turn every game into a victory, but also believes in her without making her feel full of herself. Oyelowo's performance is worthy of an Oscar.

Nakku is ravaged both by people and by the problems in her life. She sees in life what a person in a poor, war-torn setting and cash-based society sees - hunger, prostitution, abuse and humiliation - yet overcomes them all for the sake of her children. Such rare resilience can only be the result of such intense suffering. With her brilliant emoting, Oscar-winner Nupita Nyong'o makes Nakku embody all the troubles the people of Katwe face.

But the one who gets the audiences' standing ovation is Madina Nalwanga who plays Phiona. This untrained actress packs a punch with her silent yet powerful, and nervous yet bold portrayal of a poor teenager who braves all odds to master her craft. She slithers her way through the game of kings and queens, winning match after match, falling only to rise again, while struggling to get her life and family together.

Disney Studios has done a brilliant job bringing to life the conditions of a destitute place. And it deserves more applause for not overdoing it and sticking to reality. Queen Of Katwe is an awe-inspiring film of how one can escape poverty, war, hunger, misogyny, crime and worse by having a dream. Checkmates are illusions.
Share. Save. Connect.
Tweet
QUEEN OF KATWE SNAPSHOT 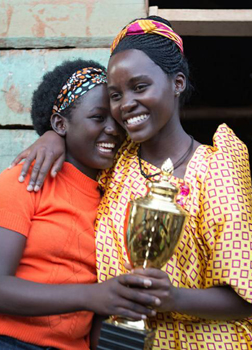 ADVERTISEMENT
This page was tagged for
Queen Of Katwe english movie
Queen Of Katwe reviews
release date
Madina Nalwanga, Lupita Nyong`o
theatres list
Follow @fullhyderabad
Follow fullhyd.com on
About Hyderabad
The Hyderabad Community
Improve fullhyd.com
More
Our Other Local Guides
Our other sites
© Copyright 1999-2009 LRR Technologies (Hyderabad), Pvt Ltd. All rights reserved. fullhyd, fullhyderabad, Welcome To The Neighbourhood are trademarks of LRR Technologies (Hyderabad) Pvt Ltd. The textual, graphic, audio and audiovisual material in this site is protected by copyright law. You may not copy, distribute, or use this material except as necessary for your personal, non-commercial use. Any trademarks are the properties of their respective owners. More on Hyderabad, India. Jobs in Hyderabad.