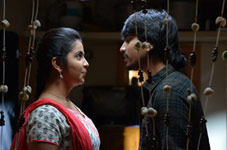 Ravi Kandala / fullhyd.com
EDITOR RATING
4.0
Performances
Script
Music/Soundtrack
Visuals
5.0
3.0
4.0
5.0
Suggestions
Can watch again
No
Good for kids
No
Good for dates
No
Wait to rent it
Yes
If you've failed your exams, don't have any intention of ever passing, and have absolutely no idea what to do with your life, we suggest you turn to Telugu cinema for inspiration. It will make you believe that you can get a good-looking girl to get all moony over you, challenge her dad and win him over, and settle down with an awesome job. And Cinema Choopistha Mava is a great place to start.

The film starts off with Katti aka Kanta Rao (Raj Tarun) thrashing up a friend who fails intermediate because his (the friend's) reputation is tarnished. He then goes home to find out that he himself has failed, too. By sheer coincidence, he comes across a picture of Pariniti (Avika Gor) who's topped the intermediate exams scoring 996 out of 1000 marks.

As is the wont of all Telugu heroes, he falls in love with her at first sight while she avoids him like the plague. He then just walks into the engineering college she's studying at and starts attending classes while stalking her non-stop. He also plays a part in a play in the college along with her, and wins the Student Of The Year award, too (yes - all this without even being a student of the college). And as is the wont of all Telugu heroines, Pariniti falls for him hook, line and sinker the moment he beats up a couple of eve-teasers (never mind that what he's been doing amounts to pretty much the same thing).

When Pariniti's father Somnath Chatterjee (Rao Ramesh) shortly finalizes her wedding, Katti lands up at her house and announces to everyone present that he loves her. Chatterjee then challenges Katti to pay his entire household's expenses for a full month - if he succeeds, he gets the girl, and if he fails, he walks away. Katti takes up the challenge, and as you can guess, gets a great job, the girl and the admiration of his father-in-law.

Cinema Choopista Mava is completely inspired from the movie whose song it is titled after. Similar to what happens in Race Gurram, the "mava" here is a stickler for quality - he believes everything should be of a high standard, and is then stuck with Katti, who is good for nothing and the opposite of everything he (Chatterjee) believes in. The entire movie runs in this single track mode - Chatterjee posing a challenge and Katti overcoming it without breaking a sweat. The film gets tedious soon considering the story has been beaten to death. Some comedy comes to its rescue, but even here, many jokes are stretched for too long, killing all the fun.

The romance is incidental, and the director sure seems to be in love with Avika Gor - there is no other way to explain the number of montages she has in the movie. She repeats her cute girl shtick, while Raj Tarun feels slightly louder than necessary. Rao Ramesh gets a big role and does well. The guy who played the hero's father is a riot, and the friends are funny, too.

The music is decent, but the songs are speed-breakers in a movie that already feels like it's crawling. The film has been shot well, and appears to have a decent budget.

Cinema Choopista Mava is not really worth a trip to a theatre - it is best watched on TV on a Sunday afternoon.
Share. Save. Connect.
Tweet
CINEMA CHUPISTA MAVA SNAPSHOT 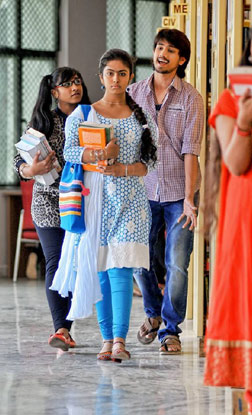 ADVERTISEMENT
This page was tagged for
Cinema chupista mama Telugu movie review&rating in telugu
telugu movies cinema chupista maava HD
Cinema Chupista Mava telugu movie
Cinema Chupista Mava reviews
release date
Follow @fullhyderabad
Follow fullhyd.com on
About Hyderabad
The Hyderabad Community
Improve fullhyd.com
More
Our Other Local Guides
Our other sites
© Copyright 1999-2009 LRR Technologies (Hyderabad), Pvt Ltd. All rights reserved. fullhyd, fullhyderabad, Welcome To The Neighbourhood are trademarks of LRR Technologies (Hyderabad) Pvt Ltd. The textual, graphic, audio and audiovisual material in this site is protected by copyright law. You may not copy, distribute, or use this material except as necessary for your personal, non-commercial use. Any trademarks are the properties of their respective owners. More on Hyderabad, India. Jobs in Hyderabad.