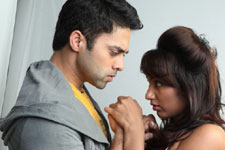 Most of these films did not run in cinemas for more than 1-2 weeks. Audiences cursed Varma squarely for making such movies. And any other filmmaker with such a dismal track record would find it difficult to find a producer for their next movie. Even if they did, they would definitely struggle for an audience.

Varma, however, continues to defy stereotype in more ways than one. He still finds producers for his whims and fancies (Varma products have ceased to be movies long ago). And the audiences, the fickle-minded janta janardhan who make and break fortunes every Friday, will still throng to a first-day-first-show of a Varma movie - never mind if that is the only show that is full.

Ice Cream, Varma's latest assembly line product, was sold for a profit, we were told. It was quite shocking - nobody knows the film's heroine Tejaswini, Navdeep isn't a big star, and Varma, like we've said, has surely lost his mojo. Who then bought the movie for a price that ensured profits?

But once you see the movie, you understand - the unknown Tejaswi and the little known Navdeep must've been paid peanuts. There are four other actors who barely have any screen time - so nothing to pay them either. And the entire film is shot in a single house - one rented guesthouse, and the film's shooting is done. With a budget that must've been enough to buy a few raw peanuts, even selling the film at the price of roasted peanuts must've helped the producers make a profit. There, no wonder Varma still gets producers.

Ice Cream is about Renu (Tejaswi), a medical student, who stays back at home while her parents go out to a cousin's wedding, owing to exams. Renu's parents are obviously uber rich, given that the house she lives in includes a lawn with a grand piano in the centre.

Alone in the house, Renu keeps seeing weird apparitions and hearing strange noises around. She calls Vishal (Navdeep), her boyfriend, and asks him to come over for some support.

Vishal comes to the house and convinces Renu that the apparitions are all a figment of her imagination, and that they should consult a psychiatrist the next day. Renu agrees, but before the night is out, something terrible happens - the movie ends. We are left wondering what the apparitions were, what the noises were and who the ghosts are - but what we get is an abrupt ending and RGV's voiceover (in a voice that sounds like steel claws grating over a blackboard) explaining that the flick is based on a true incident that happened somewhere.

Renu, in some ways, is just like Varma. Exactly like how RGV repeats his own plots umpteen times, Renu too does the same in the movie. She sleeps, wakes up, works out, takes a shower, eats something, calls her boyfriend, takes a shower again, sleeps again, calls her boyfriend again, climbs up the stairs and comes down, eats something again, sleeps again - you get the idea. Now imagine seeing this sequence of events on the screen. Add a ghost with worse make-up than the Ramsay ones. And some completely intangible dialogue (trust us - we could not make head or tail of over 50% of the film's lines). That's Ice Cream for you.

The actors do what Varma tells them to do, and Varma's camera angles do the rest. The camera is as usual a complete voyeur, focusing as much as possible on the heroine's anatomy. The much-hyped flowcam technology is not something normal moviegoers would either fathom or appreciate. The music is unnecessarily loud and solely aimed at scaring you - the amount of jeering and hooting in the theatre clearly showed that the intended frights didn't work.

We walked out wondering what could be worst, and saw RGV's announcement about his next movie on Twitter - titled XES - and had our answer.
Share. Save. Connect.
Tweet
ICE CREAM SNAPSHOT 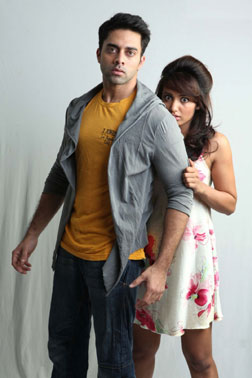 ADVERTISEMENT
This page was tagged for
Ice Cream telugu movie
Ice Cream reviews
release date
Navdeep, Tejaswi Madivada
theatres list
Follow @fullhyderabad
Follow fullhyd.com on
About Hyderabad
The Hyderabad Community
Improve fullhyd.com
More
Our Other Local Guides
Our other sites
© Copyright 1999-2009 LRR Technologies (Hyderabad), Pvt Ltd. All rights reserved. fullhyd, fullhyderabad, Welcome To The Neighbourhood are trademarks of LRR Technologies (Hyderabad) Pvt Ltd. The textual, graphic, audio and audiovisual material in this site is protected by copyright law. You may not copy, distribute, or use this material except as necessary for your personal, non-commercial use. Any trademarks are the properties of their respective owners. More on Hyderabad, India. Jobs in Hyderabad.