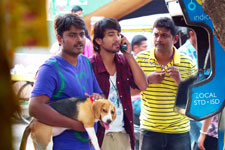 Josh / fullhyd.com
EDITOR RATING
5.5
Performances
Script
Music/Soundtrack
Visuals
6.0
6.0
4.0
6.0
Suggestions
Can watch again
No
Good for kids
No
Good for dates
Yes
Wait for OTT
Yes
This reviewer walked out of Kittu Unnadu Jagratha (KUJ) under the assumption that there's a genetic connection between this film and Express Raja.

Abducting a dog is a major plot point in both films. The hero (Raj Tarun here) gets involved in dognapping because of some complications with the wealthy girlfriend (Anu Emmanuel). The villain (Arbaaz Khan) is a big powerful fellow with a close family member who soon becomes an Achilles' heel. The story branches into unusually convoluted and contrived sub-plots which tie together eventually. And even the humour scheme is identical that of Express Raja, right down to a member of a villain's gang being impaired in a funny way (deafness in Express Raja, nightblindness in KUJ).

We were then justifiably shocked and bewildered to know that the director of KUJ is Vamsikrishna Naidu (who made Dongaata before this), and that this film apparently has nothing to do with Merlapaka Gandhi. There's one telling difference, though - KUJ feels amateurish in comparison to Express Raja. If these were brothers, the former would be the underachieving sibling who avoids relatives to ward off comparisons with the latter.

The jokes haven't got enough pluck (it doesn't help that some of them are on rape or involve family-unfriendly crazy flowers). The songs (Anup Rubens) are easy to get distracted from, and the score is just about functional. The main performances are often basic (Arbaaz Khan is clearly speaking Hindi in some places even if the dubbing is Telugu). The multiple sub-plots do not connect for a long while, and don't fully entertain during establishment (much of the first half).

But let's not nitpick. One has to consider the creative bankruptcy in contemporary Telugu comedies where the best they come up with is a spoof of a mass hero with a decidedly out-of-shape comedian. Given this setting, there's still enough original material in KUJ that is both interesting and funny. Enough subplots and twists are worked into the plot to keep you engaged. And they are written with some concern for detail. The various dog-kidnapping sequences, a godman who specialises in predicting film fortunes, goons giving loans with the loanee's body parts as collateral... it isn't a boring film as long as the writing isn't flat. And the comedians are talented.

Top of the crop is Prudhvi who plays a goon with nightblindess. The chuckles don't stop as he fumbles around in moonlight barely able to tell apart Chandrababu from Chandrashekhar yet behaving as authoritative as both the Chandras put together. The rest of the comic cast (including Praveen, Raghubabu, Vennela Kishore) is very much on the money with the laughs coming consistently even when the jokes don't work.

The main performances are only salvaged by Raj Tarun's comfort on camera. His nonchalance and his pronounced but confident accent set him apart from most of these young heroes who always look like they'd rather be somewhere else doing something else. Anu Emmanuel certainly looks like that. Her big (beautiful) hazel eyes distract you for a while - even a long while, maybe - but you eventually register the poor lipsync and the unsure acting. And the lesser we talk about Arbaaz Khan, the better (but really, we never dreamed that anyone unrelated to Salman Khan would voluntarily cast him in anything at all).

All said and done, Kittu Unnadu Jagratha still has something of an original script where the makers endeavoured to keep whipping out jokes and the cast tried to make the best of it. You could, too, if you do not think too much about Express Raja.
Share. Save. Connect.
Tweet
KITTU UNNADU JAGRATHA SNAPSHOT 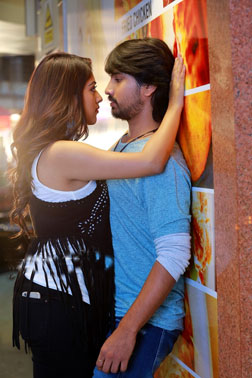 ADVERTISEMENT
This page was tagged for
kittu unnadu jagratha hero frnds
kittu unnadu jagrata full movie in telugu
Telugu Kittu unnadu jagratha movie come
kittu unnadu jagratha full movie in telugu
Kittu Unnadu Jagratha telugu movie
Follow @fullhyderabad
Follow fullhyd.com on
About Hyderabad
The Hyderabad Community
Improve fullhyd.com
More
Our Other Local Guides
Our other sites
© Copyright 1999-2009 LRR Technologies (Hyderabad), Pvt Ltd. All rights reserved. fullhyd, fullhyderabad, Welcome To The Neighbourhood are trademarks of LRR Technologies (Hyderabad) Pvt Ltd. The textual, graphic, audio and audiovisual material in this site is protected by copyright law. You may not copy, distribute, or use this material except as necessary for your personal, non-commercial use. Any trademarks are the properties of their respective owners. More on Hyderabad, India. Jobs in Hyderabad.