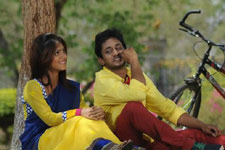 Pranita Jonnalagedda / fullhyd.com
EDITOR RATING
2.0
Performances
Script
Music/Soundtrack
Visuals
2.0
1.5
3.0
3.0
Suggestions
Can watch again
No
Good for kids
No
Good for dates
No
Wait to rent it
No
To lay it on the line, Prema Prayanam is much the same as a sample of packaged food - of the bad variety. It has all the formulaic features - the hero, the heroine, a love story, a dying mother, a villainous dad, fight sequences, songs (including an item song that would make Poonam Pandey seem sober) and some comedy. But stuffing too much into a packet can result in the packet tearing. This is exactly what has happened to Prema Prayanam.

Voltaire once said, "The best way to be boring is to leave nothing out". The filmmakers have made sure that Voltaire was right.

Prema Prayanam begins with a couple walking hand-in-hand, into the beach, to commit suicide. To their shock, they find two bodies - of a girl and a guy - being pushed ashore, and take them to the hospital. And then, after some police enquiry, we are thrown into the flashback of the two who are admitted to the hospital.

Seenu (Mahesh Nandam) comes home to his village for the holidays after finishing a college project, which has apparently been sent for review to America, and could be his ticket to the USA. His mother is sick, and coughs blood. But she doesn't tell anyone at home, because she is scared it will spoil her son's future. When her husband comes to know about this, she makes him promise he won't tell their son too.

Meanwhile, our hero happens to see a girl, Sirisha, and falls madly in love with her. This is followed by sleepless nights, and he keeps following her everywhere, and keeps "saving" her whenever she falls (which is one thing she seems to do a lot - she falls down while cycling, she falls down while walking, she falls down while running... you get the drift). On a day, when he is planning to confess his love to her, he comes to know that Sirisha is leaving for Hyderabad. He runs behind her, and boards the first bus he sees, in order to catch her. The bus, conveniently, is headed to Hyderabad, too.

Once he reaches Hyderabad, he looks for her everywhere (that includes Necklace Road, Charminar, Nampally - we don't know why he expects to find her on the road), and finally faints in front of Charminar. A friend rescues him.

After more searching, now with the help of friends, he somehow falls under her car, and she gets to know that he loves her. She says she doesn't love him. But then later, the heroine tells her friend that she loves him too but is scared to accept it because she is afraid of her dad (Nagineedu), who kills people mercilessly. From what we understand, Seenu and Sirisha have met each other 2 or 3 times and exchanged smiles of the sort you would exchange with a random stranger. This is all it takes for people to fall in love, apparently. Anyhow, they start dating and serenading around trees and on roads.

Seenu's mother dies in this midst. Incredibly enough, in this age of technology, the news of his own mother's demise doesn't reach Seenu even after several days. It is even more nonsensical that when Seenu calls up his home and finds the phone not working, he doesn't try to call anybody else around! But then, anything can happen here, because this is the queer world of Prema Prayanam.

The hero is sent back home by Sirisha, so that he may escape her father. This is when he finally finds out about his mother's death. This scene is the only one that you connect emotionally with. But it goes over the top pretty quickly.

The rest of the story is about how Sirisha's dad, who can't bear to see her with a guy of a lower status, tries to separate them. He throws Seenu into some river/nala/pond, and unable to bear this, Neethu jumps behind him. Now you know how both of them ended up on the beach.

Superficial writing and half-raw dialogues give the impression that the makers have either not done their homework, or have done it with half-knowledge. The actors' attempts to be funny and dramatic make things feel fake and boring.

Also, there is no continuity between different sequences. For example, the lovers are supposedly in Hyderabad, but they meet at restaurants whose signboards say "Palakol".

We realize that the movie has been made on a budget that is easy on the pocketbook, but that's no reason to Ctrl+C and Ctrl+V the college scenes from Sye.

Songs seemed to have been inserted just because they were composed. But then, the music is one of the few positive aspects of the movie. Though not exceptional, it isn't very bad either.

Mahesh Nandam and Nagineedu are the only two people who act. Nagineedu's performance is impeccable, in spite of his role being meaningless at times. Mahesh seems to have some talent, and he shouldn't waste it on such films. He looks good, can act, and is also a good dancer.

Neethu can't emote, can't dance and worst of all, her makeup plays spoilsport. Posani's presence in the film is just an attempt to bring in some known faces. The rest needn't be mentioned.

"Naku inta pedda siksha nyayama", goes a song in the movie. That's exactly what we felt like asking. This is the kind of movie that makes you wish you had the option to "Swipe the screen to block." Don't watch it.
Share. Save. Connect.
Tweet
PREMA PRAYANAM SNAPSHOT 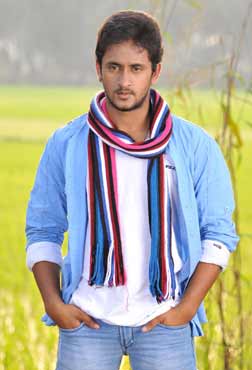 ADVERTISEMENT
This page was tagged for
prema prayanam movie
Prayanam movie dowload telugu
Telugu full movie Prema prayaanam 2013 download
Prema prayanam movies 2013
Prema prayanam 2013 movie download
Follow @fullhyderabad
Follow fullhyd.com on
About Hyderabad
The Hyderabad Community
Improve fullhyd.com
More
Our Other Local Guides
Our other sites
© Copyright 1999-2009 LRR Technologies (Hyderabad), Pvt Ltd. All rights reserved. fullhyd, fullhyderabad, Welcome To The Neighbourhood are trademarks of LRR Technologies (Hyderabad) Pvt Ltd. The textual, graphic, audio and audiovisual material in this site is protected by copyright law. You may not copy, distribute, or use this material except as necessary for your personal, non-commercial use. Any trademarks are the properties of their respective owners. More on Hyderabad, India. Jobs in Hyderabad.