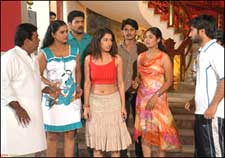 EDITOR RATING
2.0
Performances
Script
Music/Soundtrack
Visuals
6.0
2.0
2.0
4.0
Suggestions
Can watch again
No
Good for kids
Yes
Good for dates
No
Wait for OTT
No
It's a bad sign if no one's checking if you have a ticket before you enter the theatre for a movie. It's worse when in just over an hour you realize that nothing can save you from leaving this one with a supreme headache. It's horrible when you then look at your watch and realize that it's actually been just 10 minutes since the film started.

Bramhanandam Drama Company is a remake of Bhagam Bhag, which itself was a remake of the Hollywood movie Runaway Jury. Okay, maybe it wasn't, but if Bramhanandam Drama Company had been a remake of Runaway Jury, it might not have looked much different - it's not like they are particular about which movie they are remaking, or, beyond a point, even remember. It's hard enough to make an original movie - if you want them to remake one and actually remember the whole movie they are remaking, that's a tall order.

Anyway, Bramhanandam Drama Company is the name of the song-and-dance troupe run by Anand Rao (Bramhanandam) that does imitations of Tollywood songs in costumes that are so ghastly, if you stood in one of them next to a monkey doing a one-legged live tightrope walk on a street, people would throw coins at you.

His heroes Vasu (Sivaji) and Siva (Ravi Krishna) are less bothered by this, though, and more concerned with the curves of their heroine, who has a figure that'll help you instantly guess her IQ. If you're a female and are upset with that sentence, you've actually done more than necessary - the guys need you to be just female to be interested in you, you don't even have to be upset.

The heroine however cannot take their physical overtures beyond a point - that is, when Ravi Krishna shows more acting skills than her. Anyone will break if he realizes that Ravi Krishna is a better actor than him. She escapes, and with a contract to tour Thailand but without his heroine, Anand Rao needs a miracle to help him.

A miracle does happen - no, the movie does not end here, but Siva finds Arpita (Kamalinee Mukherjee), a girl with suicidal tendencies, about to kill herself. That's not a miracle in itself, of course - there's a whole audience there with suicidal tendencies by now - but she agrees to become their heroine instead of dying, which is indeed a miraculous choice.

Siva tries to impress Arpita, and she kills herself. No, not because of that - she anyway has suicidal tendencies, remember? Then a lot of puzzling things start happening, the most puzzling of them being you still hanging around in the theatre.

Well, the film has a very happy ending - everyone is very happy that it ends. Sivaji has a tough role - he has to look cool, macho and interested in the movie. Well, normally two out of three ain't bad, but in the case of this movie, none of out three ain't bad either. Ravi Krishna makes Uday Kiran look like a thespian with his mere presence. Kamalinee Mukherjee should normally have been the saving grace of the movie, but she needs a lot of divine grace to save herself after this.

A lot of popular Tollywood comedians adorn the movie, though they will soon deny it unless you can prove it was indeed them. The music has to be heard to be believed, so we suggest you don't aim to believe it. Someone's idea of a remix of old Telugu duets with a monotone beat is symtomatic of the ills that ail this movie, and that meets our quota of high-sounding sentences for this review.

The best way to watch Bramhanandam Drama Company is on a DVD at home when you're not home. If the power supply fails, too, that'll be the icing on the cake.
Share. Save. Connect.
Tweet
BRAMHANANDAM DRAMA COMPANY SNAPSHOT

ADVERTISEMENT
This page was tagged for
Bramhanandam Drama Company telugu movie
Bramhanandam Drama Company reviews
release date
Sivaji, Ravi Krishna
theatres list
Follow @fullhyderabad
Follow fullhyd.com on
About Hyderabad
The Hyderabad Community
Improve fullhyd.com
More
Our Other Local Guides
Our other sites
© Copyright 1999-2009 LRR Technologies (Hyderabad), Pvt Ltd. All rights reserved. fullhyd, fullhyderabad, Welcome To The Neighbourhood are trademarks of LRR Technologies (Hyderabad) Pvt Ltd. The textual, graphic, audio and audiovisual material in this site is protected by copyright law. You may not copy, distribute, or use this material except as necessary for your personal, non-commercial use. Any trademarks are the properties of their respective owners. More on Hyderabad, India. Jobs in Hyderabad.