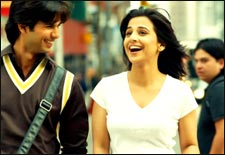 EDITOR RATING
4.0
Performances
Script
Music/Soundtrack
Visuals
6.5
4.0
6.0
8.0
Suggestions
Can watch again
No
Good for kids
Yes
Good for dates
Yes
Wait to rent it
Yes
Raj Malhotra (Shahid Kapoor) is a talented architect who's been unemployed for so long, he should've gotten a promotion for it. After 5 years of this unfortunate fate, he decides he needs to do something really different to snap out of it. So he digs really deep, introspects long and hard to get to the root of the problem, and finally figures out what to do - he prays God for a miracle.

It turns out that that is officially the way to land Vidya Balan, for Priya (Balan) keeps bumping into him after that and bringing him good luck each time. If you are planning to try this yourself, remember that you need to stay unemployed for 5 years first, and then hope it's the same God still in office. To hedge that risk, whenever we at fullhyd.com need a miracle, we ask for it 5 years later anyway - at least you need not stay unemployed for 5 years that way. Please move on to the next paragraph.

Now anybody will tell you that the most important thing to do if you find a girl who's bringing you good luck, is to find out how much of a cut in the revenues she wants and quickly sign a profit-sharing contract. Raj however is a typical male commitment-phobe, and wants to wait and see if he can find someone else who will bring him even better luck.

He is also a little slack on ethics, and so wrongly tells Priya that he is trying to get a deal with the business house he's landed as a client, to save an aged people home that she is senti about but that they need to vacate to let the business build a mall there. If this reminds you of some other movie, please count upto 10, starting from -10,000. It may not help you forget what you were reminded of, but at least you'll be doing something more useful than cribbing about originality.

Anyway, Priya is already engaged to Karan (Amit Verma), and just as she is about to get married, Raj realizes that he is in love with her. All seems lost and he prepares for a life of heartbreak, but then this is a movie, and the difference between a movie and real life is that in a movie there is an interval which allows you to disengage, relieve yourself and get something to refresh yourself, while in real life a movie is what allows you to disengage, relieve yourself and refresh yourself. If you are searching for depth in that profound-sounding sentence, it's just that it is now the interval.

Kismat Konnection sounds suspiciously like Yes Boss - a motivated youngster down on his luck trying hard to cosy up to a rich businessman to jumpstart his career even if that means misleading the girl he loves. To that it adds a Lage Raho Munnabhai schtick - an old age home needing to be vacated, and causing a rift between the hero and his ladylove. SRK and light-heartedness saved Yes Boss, and a solid theme saved LRM. To save the depthless and humourless Kismat Konnection, Aziz Mirza needs a quid pro quo with the God he features in it.

Shahid Kapur has biceps on both his arms, and showcases them so enthusiastically all through, you're grateful he doesn't have them anywhere else. Raj and Priya become such great "friends" in the movie, hanging out with and touching each other so much when Priya is very much engaged to someone else, the Harry Potter movies seem more realistic. Vidya Balan is more girl-next-door than babe, and that's perhaps another reason Shahid Kapur does all the exposing.

A couple of songs are nice and catchy, and the film, shot entirely in Canada, looks visually appealing, but those can be forgiven given how much they managed to get wrong in the movie. You can still watch this, but that's a bit like hitting the "I'm Feeling Lucky" button on a Google search - you have to be supremely confident you'll like whatever you get. Only, remember, Murphy's Laws are applicable to that button as well.
Share. Save. Connect.
Tweet
KISMAT KONNECTION SNAPSHOT

Both the hero and heroine are looking good.

ADVERTISEMENT
This page was tagged for
Kismat connection image movie
Kismat Konnection
Kismat Konnection hindi movie
Kismat Konnection reviews
release date
Follow @fullhyderabad
Follow fullhyd.com on
About Hyderabad
The Hyderabad Community
Improve fullhyd.com
More
Our Other Local Guides
Our other sites
© Copyright 1999-2009 LRR Technologies (Hyderabad), Pvt Ltd. All rights reserved. fullhyd, fullhyderabad, Welcome To The Neighbourhood are trademarks of LRR Technologies (Hyderabad) Pvt Ltd. The textual, graphic, audio and audiovisual material in this site is protected by copyright law. You may not copy, distribute, or use this material except as necessary for your personal, non-commercial use. Any trademarks are the properties of their respective owners. More on Hyderabad, India. Jobs in Hyderabad.