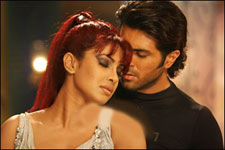 Samrat Sharma / fullhyd.com
EDITOR RATING
2.5
Performances
Script
Music/Soundtrack
Visuals
3.0
1.0
2.5
8.5
Suggestions
Can watch again
No
Good for kids
No
Good for dates
No
Wait to rent it
Yes
Love Story 2050 is the new benchmark for special effects in blockbuster-styled movies in Bollywood, period. It has, not one of the, but absolutely the best SFX in a film to come out of the Bollywood factory, and that is something that cannot be denied. Unfortunately, the pretty visuals are strung together with absolutely the worst film to come out this year.

Harry Baweja has chosen to give his son's debut the whole Hrithik treatment - so in comes the sci-fi with impressive CGI, masala-fied pop genre, and set pieces just to showcase his action/dance moves. Yep, but there's two problems with it. One, the son tries consciously to be Hrithik, copying the posturing, the mannerisms, with some SRK thrown in. Two, Baweja senior forgot to hire a writer and decided to shoot whatever weed-induced pap he had in his drawer.

The one-two punch of the Bawejas' ineptitude take the film down in shorter time than you can count down from 10, which is ironical because the film seems to go on and on. Clocking in at a lot more than 3 hours, the film meanders around the laughable central plot many times before culminating in a climax you couldn't give two tugs of a dead dog's tail about.

While on the subject of the plot, might I let you in on a (relatively) spoiler-free synopsis? Please, I insist. There is much fun to be had. Know that the film is stuck firmly in the '90s, plot-wise. Karan Malhotra (Baweja Jr.) is an aimless brat with father issues who sees Sana (Priyanka Chopra, in a role that will ruin her career, no jokes) chasing butterflies, and falls heads over heels. Predictably he pataos her, and they sing songs.

Much tomfoolery by the pair, and subsequently the family, later, the girl dies unexpectedly. Karan's uncle, Yatinder Khanna (Boman Irani, phoning this one in) is the mad scientist made up to look exactly like Einstein, and is a NASA-retired Prof working on a time machine. So far, so good? Hah, had ya.

Karan, instead of going back in time to save the girl, travels to The Future to meet and subsequently woo the reincarnation of his biwi-to-be-but-now-dead.

Who turns out to be a pain, by the way. She is a pop star with red (red!) hair and an attitude. Karan, though, re-woos her, and they finally get together, pending the final climactic fight with a hooded villain. Really, by the time the first half ends, it's just a matter of how much tolerance you have for the considerable but wasted CGI, because otherwise the film is simply a bunch of stuff seemingly edited together in exasperation.

Making the whole thing an utter mess is uniformly bad music and some of the worst writing you would have seen in a launch film in a very long time. The music is a wannabe version of the soundtrack of better movies, oddly unpolished at times giving in to cacophonous spasms, but it's the writing that really keep the film from having any sense of possible salvation. Then again, maybe that honor belongs to Harman. Whether it be his empty posturing, the vacuous charisma, or his hammy delivery, Harman fails miserably.

The result is something akin to a spoof of a science fiction masala star son launch, and that's not a good thing. Hell, if it was that, I'd have plonked good money on watching it. The blame of this mess, though, is squarely on Harry Baweja's shoulder. Without an original thought or a bankable script, he goes ahead and apes Roshan Sr. in his direction - with alarmingly abysmal results - and asks his son to ape the other famous son.

I can see how the film, with all the trappings of a science fiction extravaganza, may have seemed like the perfect launch. Fantastical but with desi sensibilities. A great looking entertainer with a looker opposite the son. A very well produced FX team. Solid gold.

It's a mess that isn't even fun to enjoy for its little pleasures. Do yourself a favor and stay at home. Maybe catch the other celebrity relative debut?
Share. Save. Connect.
Tweet
LOVE STORY 2050 SNAPSHOT


Pros: Special effects
Cons: Everything else

ADVERTISEMENT
This page was tagged for
Love Story 2050 hindi movie
Love Story 2050 reviews
release date
Harman Baweja, Priyanka Chopra
theatres list
Follow @fullhyderabad
Follow fullhyd.com on
About Hyderabad
The Hyderabad Community
Improve fullhyd.com
More
Our Other Local Guides
Our other sites
© Copyright 1999-2009 LRR Technologies (Hyderabad), Pvt Ltd. All rights reserved. fullhyd, fullhyderabad, Welcome To The Neighbourhood are trademarks of LRR Technologies (Hyderabad) Pvt Ltd. The textual, graphic, audio and audiovisual material in this site is protected by copyright law. You may not copy, distribute, or use this material except as necessary for your personal, non-commercial use. Any trademarks are the properties of their respective owners. More on Hyderabad, India. Jobs in Hyderabad.