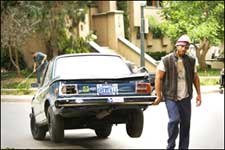 Samrat Sharma / fullhyd.com
EDITOR RATING
5.0
Performances
Script
Music/Soundtrack
Visuals
7.5
3.5
3.0
6.5
Suggestions
Can watch again
No
Good for kids
No
Good for dates
Yes
Wait to rent it
Yes
I mentioned sometime back that Bollywood trailers have gotten quite good at hiding the film's flaws. Meanwhile our brethren across the seven seas have perfected the art of trailer editing. What sounded good on paper, and looked good on trailer spots, is an unmitigated mess once you sit down in the cinema hall, popcorn in hand. Hancock is an utter mess of a film, superhero or otherwise, and in a summer full of quality superhero films, this one is a dead loss.

Having gone through multiple re-edits of the script, many re-shoots, and at least four re-cuts post production, this is a movie that tries very hard to be good, but the old adage about too many cooks spoiling the paneer tikka was never truer than in Hancock's case. Of special note is the absolutely limp story that takes place in its own little world where nothing needs to make sense, apparently.

The bits you saw in the trailer stands - Hancock (Smith) is a rude, drunk superhero with a sour attitude, and a disaster waiting to happen. He saves people by breaking stuff, as he does one day by saving Ray Embrey (Jason Bateman). Ray is a PR guy who wants to revamp his image and make him into a guy people like instead of hating so much. Mary Embrey (Charlize Theron) is Ray's hottie wife, and if you paid a little attention to the trailers, something that will change the film halfway down.

And it's that bit - the one that will legitimately be called a spoiler if I talked about it - that is the silliest, most idiotic plot point I have seen in an action movie since Bad Boys II. Also thrown in the mix is a one-handed villain, who as villains for superheroes go, you have to admit, is pretty much the lamest guy thing you heard of. He's not a one handed super-powered villain if you thought I was being too harsh. Nope, it's your regular riffraff and hooligans sort with just one arm. Sigh. Hand them superhero 101.

The problem, though, is not just in the third, spoiler-y act. The problems begin as soon as the logos disperse, as the first half of the film is unleashed upon us in a staccato haphazard manner. The pacing is all wrong, and whole sequences seem overcooked by the distasteful studios. As a PR stunt, Hancock willingly goes to jail, and by that time some really offensive and unfunny jokes have surfaced, the effects have a raw feeling about them, and you are furiously munching on the popcorn to distract you from the bland characters.

There is a part where the film falls into the familiar grind of story exposition inter-cut with some action, which is admittedly okay(ish), and at least fun to watch for the time it is on screen. Nothing memorable, but nothing as terrible as the first half. A few references thrown in, and you have your standard summer movie. Then comes the third act, which is so terribly written and nauseatingly shot, I almost left in disgust.

The penchant to make the next Bourne that film-makers have cultivated after Greengrass' successful avant-garde action filmmaking is getting to my nerves now. (In all fairness, Michael Mann had been doing shaky cam way before Paul.) The action is shot with close-cut, shaky cameras, which in a summer blockbuster movie is just a terrible choice. Sometimes the staples work, but they don't seem to get it.

I can see the glimmers of intelligence behind some concepts and the thoughts behind them - especially the less explored superheroes as gods theory - but it has long since been mashed into what the studio machinery thought this film should have been. The only thing not lost after the multiple workouts the film got is Will Smith.

Smith really acts well in Hancock, a movie that will be forgotten in his career, ironically. He doesn't fall back on his screen presence and tries to take it easy. I mean, he really really acts like he means it. The un-likeability of Hancock is real, and not just a "aw he's so cute when he's drunk" thing. His attempts at trying to understand things bigger than the events of the movie are real - and ultimately it is Smith that saves the film from becoming a bad film.

Which is maddening, because the good work that he puts in, and the serviceable second act, are good enough to coast a film through the box-office, but the rest of the flotsam is enough to make it a middling affair. Which is neither here nor there, ultimately.

If you're a Smith fan, you could in theory give this a go, but I'd suggest waiting for the big guys.
Share. Save. Connect.
Tweet
HANCOCK SNAPSHOT


Pros: Will Smith
Cons: The 2nd half

Aamchi Hyd on 14th Jul 2008, 1:01am | Permalink
Nice movie - with an interesting twist - its incessant genre-hopping may be too much for some movie watchers who like their movies predictable and insipid (like the reviewer here - who also has the added 'gift' of being totally pretentious), but everyone has the right to like the movies their way. Just hate it when reviews are written to scare people of decent fare. Sure, its not 'I am Legend', or 'Ali', or even 'The Pursuit of Happ'y'ness', but it sure is true to its story, and consistent with the things that unfold. I won't spoil it more for people who may wanna watch it, who, I hope, are not swayed by the review.

RATING
7
Raj on 12th Jul 2008, 10:23am | Permalink
Hancock !!!
Though it has high expectations, it failed to satisfy. Being a high budget and will smith in it made it highly awaiting but highly disspointing.
I would suggest you to ignore wathching in theater wasting you money for tickets and popcors instead get a dvd and watch it when u have nothing to do ....

ADVERTISEMENT
This page was tagged for
Hancock english movie
Hancock reviews
release date
Will Smith, Charlize Theron
theatres list
Follow @fullhyderabad
Follow fullhyd.com on
About Hyderabad
The Hyderabad Community
Improve fullhyd.com
More
Our Other Local Guides
Our other sites
© Copyright 1999-2009 LRR Technologies (Hyderabad), Pvt Ltd. All rights reserved. fullhyd, fullhyderabad, Welcome To The Neighbourhood are trademarks of LRR Technologies (Hyderabad) Pvt Ltd. The textual, graphic, audio and audiovisual material in this site is protected by copyright law. You may not copy, distribute, or use this material except as necessary for your personal, non-commercial use. Any trademarks are the properties of their respective owners. More on Hyderabad, India. Jobs in Hyderabad.