Short Kut - The Con Is On Review 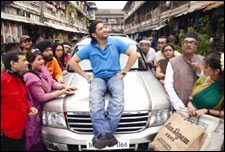 Deepa Garimella / fullhyd.com
EDITOR RATING
5.0
Performances
Script
Music/Soundtrack
Visuals
7.0
5.0
6.5
7.0
Suggestions
Can watch again
No
Good for kids
Yes
Good for dates
Yes
Wait for OTT
Yes
Like they say, there's always an easier way. Especially if there are people on the way - just step on them, and you'll get ahead. And in our queue-hating nation, such a mindset gets a zillion jobs done. Shortkut is the story of just such a queue and such a jumper, and the short-term gains, as well as the lasting moral that insists "Please Form 'Q'".

Akshaye Khanna plays Shekhar, a talented assistant director who's now working on his debut film, and who's also romancing a big star, Mansi (Amrita Rao). Mansi, though a celebrity, has many troubles. Maybe not many, but just 3 - her parents and her brother. She is the sole bread-winner of the family, but they're not happy with the dozens of crores she brings home after toiling away three shifts a day in inhuman conditions like streaming mascara and smelly co-stars.

Apparently, they want more dozens of crores, and are even making her attend ribbon-cutting ceremonies of automobile showrooms. This hurts Mansi. There's a limit to how much metal and rust a girl can take. Especially after a raucous item song with tired and graying actors.

Now, into the life of Shekhar enters Raju (Arshad Warsi), a gelled-haired bloke who goes around bossing everyone on his (Raju's) film set and behaving like the mentor of the director of his film, when he's actually a benchwarmer with an ego the size of Jupiter, and talent and brains at the other end of that spectrum. It is thus surprising that he's kicked out of his home by his landlord because he didn't pay the rent - we thought he'd been kicked out for overacting.

Raju then lives off the wary and reluctant Shekhar for sometime. Meanwhile, he's been begging Tolani (Tiku Talsania), a top producer, for a role, for the past century and a half, and is told by the exasperated producer that he's not even making a film now, and that Raju can get his own blockbuster script if he wants to act in his next production.

Behaving like an evolutionary mistake that would make Darwin give his notes a thorough relook, Raju steals Shekhar's script to give Tolani, and even makes a superhit out of it, thus becoming a star himself. Not only is Shekhar now hissing at Raju's playing dirty pool because he conned him out of his very life-dream, his (Shekhar's) marriage to Mansi has created issues of ego, identity loss, and even vile slander by industry insiders.

Shekhar sulks and sulks, and finally gives in, after realizing that what he needs is a film right now. How Shekhar fights circumstances and bags his fair share of victory, forms the rest of the story.

Shortkut is not a comedy, though the makers seem to have told Arshad Warsi and Chunky Pandey that it is. It is a pretty grim tale for most of the time, with some truly brilliant moments coming in towards the end, and some mundane moments made brilliant by Akshaye Khanna. The rest of it is about an honest and hardworking man being brutally cheated by a half-wit, and it isn't funny - we're not cribbing; there are just too few jokes for this to qualify as a comedy.

The unusually heart-warming part is that in very un-filmi style, there's only one con-man against Shekhar - he's not being ganged-up against by an unfair world. But just because the film needs drama, they frustrate the protagonist, which they do by forcibly straining the perfectly sane and loving relationship he has with Mansi.

Akshaye is brilliant, and thus brings a lot of sanity to the proceedings. He's a complete natural, and his character as the clearheaded and composed Shekhar is etched well, too. Amrita Rao plays a glam-girl, which, she must face it, she's not - and anorexia does not compensate for it. Still, hers is a pleasant character to have on screen, and she's done a good job.

Shekhar's chawl is infested with buck-toothed comics endlessly contorting their faces - out of which one seems to want to be the next Paresh Rawal. Arshad Warsi proves once again that to entertain, he needs a director, not a film. Chunky Pandey, who plays Raju's secretary, spoils the show. Tiku Talsania and a couple of other character artistes are good, though.

This film is well-shot, but certainly does not seem like a celebrated cinematographer's (Ashok Mehta) best work. Shankar-Ehsaan-Loy's music is interesting in places - the 'Kal Nau Baje' song deserves mention for its quirkiness, and the opening item song for the cameos that are being advertised like full-length roles.

Shortkut isn't entirely to be thrown to the vultures, and you could actually watch it if you're unconditionally fond of Akshaye Khanna or Amrita Arora. Else, buy a bag of Act-II and pop it at home - there's always an easier way to eat popcorn.
Share. Save. Connect.
Tweet
SHORT KUT - THE... SNAPSHOT
SHORT KUT - THE CON IS ON SNAPSHOT

ADVERTISEMENT
This page was tagged for
Short Kut - The Con Is On hindi movie
Short Kut - The Con Is On reviews
release date
Akshaye Khanna, Arshad Warsi
theatres list
Follow @fullhyderabad
Follow fullhyd.com on
About Hyderabad
The Hyderabad Community
Improve fullhyd.com
More
Our Other Local Guides
Our other sites
© Copyright 1999-2009 LRR Technologies (Hyderabad), Pvt Ltd. All rights reserved. fullhyd, fullhyderabad, Welcome To The Neighbourhood are trademarks of LRR Technologies (Hyderabad) Pvt Ltd. The textual, graphic, audio and audiovisual material in this site is protected by copyright law. You may not copy, distribute, or use this material except as necessary for your personal, non-commercial use. Any trademarks are the properties of their respective owners. More on Hyderabad, India. Jobs in Hyderabad.