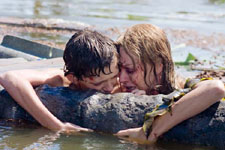 Samrat Sharma / fullhyd.com
EDITOR RATING
6.5
Performances
Script
Music/Soundtrack
Visuals
8.0
3.0
8.0
8.0
Suggestions
Can watch again
No
Good for kids
Yes
Good for dates
No
Wait to rent it
Yes
The Impossible is a very tough film to review. On one hand, director Juan Antonio Bayona has made an exceptionally well-made film. From the cinematography to the composition and shot selection, and from the editing to the use of CGI, everything is top-notch in this film about the 2004 Tsunami. The actors are duly well-directed into giving Oscar nomination worthy performances with utter sincerity and a touch of class - indeed, from a technical standpoint, the craft on display is exemplary.

The problems with the film run deeper than the surface, however. The problems begin with the approach to story. The film is about the Thailand Tsunami, which left close to 300,000 people dead in its wake, and yet told from the exclusive perspective of a foreigner family vacationing in some resort. In fact, the number of actual Thai people in this film is shockingly low.

As the parents get separated, and the children are left with either of the parents, the film tries hard to give us these heroic moments and character development as core to the story. Unluckily for us, the main cast doesn't really earn their heroism or character development, instead only changing ever so slightly to resemble an arc.  While they act well, the main cast doesn't really have the writing support them with fleshed-out arcs or motivations.

The end result is an impressive-looking film where a small kid stops being a bully after three hundred thousand people have died. Watching a tragedy that affected millions, through the prism of this family that, while its members love each other very much, is not exactly the worst affected, is a deeply strange experience. They did lose all their stuff, so at least there is that.

This is a terrible turn in an otherwise decent film - the audience unable to discern between people for whom the tragedy has made a turn for the worse, and these characters are shown as those who go through a lot of confusion, while the real suffering happens around them.

All the craft in the world also does not hide the mawkishness with which the film has been coloured - cliched and annoying ploys to win the votes at the Oscars, making the film  a reward grab over a genuinely interesting piece of cinema. It takes human tragedy, and turns that into this random story of foreigners getting separated and then finding themselves.

At what it does best - emotional manipulation via great filmmaking - this film succeeds. It's when it tries to be more, that it fails at the basics of being a film. Watch with the caveat that you may not be able to enjoy this story of guys with missing luggages in the midst of an earth-shattering natural disaster.
Share. Save. Connect.
Tweet
THE IMPOSSIBLE SNAPSHOT 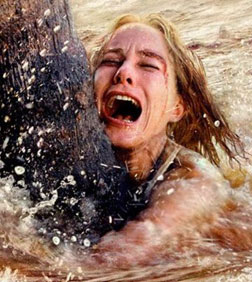 ADVERTISEMENT
This page was tagged for
The Impossible english movie
The Impossible reviews
release date
Naomi Watts, Ewan McGregor
theatres list
Follow @fullhyderabad
Follow fullhyd.com on
About Hyderabad
The Hyderabad Community
Improve fullhyd.com
More
Our Other Local Guides
Our other sites
© Copyright 1999-2009 LRR Technologies (Hyderabad), Pvt Ltd. All rights reserved. fullhyd, fullhyderabad, Welcome To The Neighbourhood are trademarks of LRR Technologies (Hyderabad) Pvt Ltd. The textual, graphic, audio and audiovisual material in this site is protected by copyright law. You may not copy, distribute, or use this material except as necessary for your personal, non-commercial use. Any trademarks are the properties of their respective owners. More on Hyderabad, India. Jobs in Hyderabad.