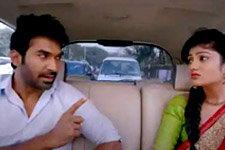 Anil Bandhakavi / fullhyd.com
EDITOR RATING
5.0
Performances
Script
Music/Soundtrack
Visuals
5.0
5.0
5.0
5.0
Suggestions
Can watch again
No
Good for kids
Yes
Good for dates
Yes
Wait to rent it
Yes
Romance and comedy are like that ideal couple that keeps us believing that we can all have a corny but cute story to tell our kids as we put them to bed of how we fell in love. And why not? These are the little things that keep our faith in the complex journey of life. Shaadi Mubarak, written and directed by Padmasri, is a tickling tale about how a handsome boy meets a pretty girl, in a story that is perfect for all ages.

Sunnipenta Madhav (Sagar Naidu) is back from Australia to find himself a bride. His mother organises a day with the matchmaker, Jayamma (Rajshri Nair), who sends her daughter, Satyabhama (Drishya Raghunath), in her place as she is nursing a sprained ankle.

Madhav and Satyabhama are on a field trip to scout for potential brides with their driver Ramesh (Rahul Ramakrishna). In true rom-com fashion, Satyabhama first gives a curious Madhav the cold shoulder, but then, inevitably, he says something very touching that changes her opinion about him, and now they're on the banks of lake love.

Madhav surprisingly commits to the third girl he sees, and reality hits Satyabhama that she is there just to facilitate the matchmaking process. But there is a ring that Madhav brings along to gift to whichever girl he chooses, that gets stuck on Satyabhama's finger when she tries it on at some point during the day without his knowledge. And so Satyabhama and Madhav are not done yet with each other, as the return of the ring is still pending.

Shaadi Mubarak pulls the right moves that take you through the sweet and sour emotional ups and downs of a man and a woman being drawn close to each other. In typical fashion, the film is filled with moments where you go to see someone, and that's it, enough with the matchmaking, you both found each other, and invariably something comes in the way of their intentions being clearly expressed to one another. The classic formula is studiously employed.

Humour is well utilised to cover the periods a person needs to go through as they travel towards the expected outcome. Madhav gets pulled into funny situations, like the one with his possible brother-in-law (Shatru) in match #2 who is a mobster who embraces him in thug fashion.

Without disrespecting the art that goes into making a rom-com, it needs to be said that the format has fewer dimensions in comparison to a movie that integrates passions and emotions beyond just romance. In rom-coms the characters mostly go through two phases: you're first crushed by a potential lover, then you're worried that you'll lose them - and, oh, how hard life would be without this person you just met. So, performances can also be judged only on these limited numbers of dimensions. What do you ask? Did they seem like they were really into each other?

Yes, the performances get the fluffy feelings of anticipation across. Both Sagar Naidu and Drishya Raghunath keep the sweetness of the saga intact with their youthful appearances. Is there room for improvement? Definitely, but that's maybe not critical. At some point, it's not better acting but a bigger star cast that gets you the big bucks.

For what it's worth, Shaadi Mubarak is a one-time entertainer that is perfect for a first date, or even for committed lovebirds who want to reminisce the early days of their relationship. Even though this one will be forgotten pretty quickly, in the meantime it's an entertainer that you can liken to the experience of stopping off on the side of the road with your significant other for ice cream. It's a forgettable but sweet experience.
Share. Save. Connect.
Tweet
SHAADI MUBARAK SNAPSHOT 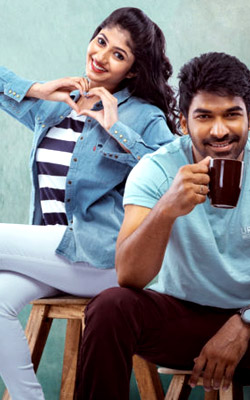 ADVERTISEMENT
This page was tagged for
Shaadi Mubarak telugu movie
Shaadi Mubarak reviews
release date
Sagar R K Naidu, Drishya Raghunath
theatres list
Follow @fullhyderabad
Follow fullhyd.com on
About Hyderabad
The Hyderabad Community
Improve fullhyd.com
More
Our Other Local Guides
Our other sites
© Copyright 1999-2009 LRR Technologies (Hyderabad), Pvt Ltd. All rights reserved. fullhyd, fullhyderabad, Welcome To The Neighbourhood are trademarks of LRR Technologies (Hyderabad) Pvt Ltd. The textual, graphic, audio and audiovisual material in this site is protected by copyright law. You may not copy, distribute, or use this material except as necessary for your personal, non-commercial use. Any trademarks are the properties of their respective owners. More on Hyderabad, India. Jobs in Hyderabad.