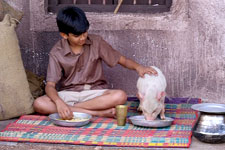 Sonali Dabade / fullhyd.com
EDITOR RATING
6.0
Performances
Script
Music/Soundtrack
Visuals
5.0
5.0
4.0
7.0
Suggestions
Can watch again
No
Good for kids
Yes
Good for dates
No
Wait to rent it
No
Right from his directorial debut Allari, Ravi Babu has tried to innovate and leave his mark on Tollywood. His filmography includes a wide variety of genres, each of them carrying his unique style. This time around, he mixes live action and animation, and adds in lots of slapstick comedy. His attempt works - almost.

An astrologer's suggestion leads to a quest to find a pig with three marks on its belly. As the law of cinematic coincidence suggests, exactly such a pig exists and is named Bunty, and belongs to Chanti (Satwik). Things get interesting when Bunty is expectedly pig-napped by some goons. As a culmination of and a prelude to a series of misadventures, Bunty swallows a memory disk carrying critical information, and due to the mistake of a courier company, ends up with Raji (Nabha Natesh) as a gift from her boyfriend Abhishek (Abhishek Verma).

From there, we get to watch the chaos as an assortment of characters tries to find Bunty and get the MacGuffin out of him. The plot follows multiple gangs, underground animal races, land-grabbing, Dubai Sheikhs looking for new brides, and a very smart pig trying to navigate them all and finding its way back to its owner.

At its heart, Adhugo is a standard tale of a boy and his pet. Had it been a drama, it would have had a starkly different mood. What we get instead is raw slapstick comedy. Tollywood has had its fair share of slapsticks in the past, most notably from E V V Satyanarayana, and Adhugo reminds you of them at least in spirit if not in execution. However, while EVV had the star power of yesteryear comedians to carry his films, this one solely relies on Ravi Babu's directorial talents.

As is routine in similar comedies, Adhugo is packed with wacky characters. The only problem is that they are one too many to keep track of. From Gutka Gangaraju to Sharjah Shankar to Six-Pack Shakti (Ravi Babu), there are many characters who try and bring all gangster clichés into the movie. Too much of anything becomes annoying, and that is exactly what happens in this movie.

Also, the limits of comedy are pushed. Every crime, from violence and kidnapping to murder and gang war, is played for laughs. It works in some scenes, but when the crimes are extended to threats of sexual assault and human trafficking, it doesn't stay funny any more. There is also poop- and snot-related humour which can really make you walk out of the cinema if you are not a fan of juvenile comedy.

The redeeming factor of Adhugo is that it doesn't take itself seriously. The characters are very cartoonish and they act exactly that way, leaving the audiences to laugh at them if not with them. And based on the tone of the movie, this is most likely what Ravi Babu was aiming for.

The performances are mostly unmemorable, and the only one who brings any emotion is Satwik as Chanti while searching for his pet. Neither Abhishek Verma nor Nabha Natesh has enough to truly stand out, and both also fail to impress with whatever they have. Among the other supporting cast, only Ravi Babu is a recognisable face, but he also gets lost in the shuffle with the rest of actors who all try and exaggerate and help stretch a thin script into a full-fledged movie. None of them really leaves an impression, reducing the overall impact of the film.

The best part of the movie is the computer-generated pig. Bunty runs, jumps, cries and fights, and all of what it does is entertaining, making you root for the only non-human character in a movie that has too many human ones. The songs are totally unnecessary.

All in all, Adhugo is a commendable attempt when it comes to mixing live action and animation, and makes you hope for better movies offering a similar experience. As a movie, however, it is just a one-time watch for audiences who can sit through slapstick, and is best watched on TV during a weekend afternoon when there is nothing better on.
Share. Save. Connect.
Tweet
ADHUGO SNAPSHOT 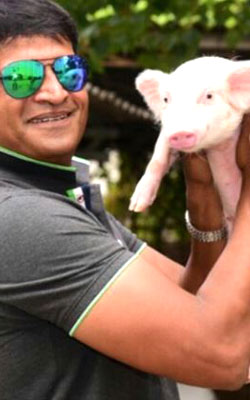 ADVERTISEMENT
This page was tagged for
Adhugo telugu movie
Adhugo reviews
release date
Abhishek Verma, Nabha Natesh
theatres list
Follow @fullhyderabad
Follow fullhyd.com on
About Hyderabad
The Hyderabad Community
Improve fullhyd.com
More
Our Other Local Guides
Our other sites
© Copyright 1999-2009 LRR Technologies (Hyderabad), Pvt Ltd. All rights reserved. fullhyd, fullhyderabad, Welcome To The Neighbourhood are trademarks of LRR Technologies (Hyderabad) Pvt Ltd. The textual, graphic, audio and audiovisual material in this site is protected by copyright law. You may not copy, distribute, or use this material except as necessary for your personal, non-commercial use. Any trademarks are the properties of their respective owners. More on Hyderabad, India. Jobs in Hyderabad.