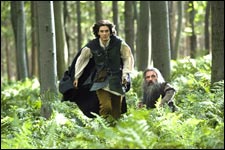 Samrat Sharma / fullhyd.com
EDITOR RATING
7.0
Performances
Script
Music/Soundtrack
Visuals
6.0
6.0
8.0
9.0
Suggestions
Can watch again
No
Good for kids
Yes
Good for dates
Yes
Wait to rent it
No
In Narnia, it has been more than a thousand years since the Pevensie children were Kings and Queens, in the first installment of the series, the fun but mouthful The Chronicles of Narnia: The Lion, The Witch, And The Wardrobe. Back in their world, Britain still has the Second World War to fight, and only one year has elapsed. Time, it is explained, moves differently in both worlds.

Thus begins the story of Prince Caspian, and while it is a little handful for newcomers to take, fans of the original should have no problem plunging into this fun, yet ultimately breakneck film. Once again we see a sequel made after the original that had so much money thrown at it, the makers overindulge in the CGI and the battles, and forget the storytelling.

That's not to say there isn't any plot. No, the books have a large reservoir of material and subtext to take from, and the lion with a Jesus complex is not just the only plot point worth mentioning, either. So we have Narnia thrown under the conquest-hungry Telmarines, who have driven the Narnians in hiding into the forest. Prince Caspian (Ben Barnes), the rightful heir to the Telmarine kingdom, is also thrown out by his scheming uncle, King Miraz (Sergio Castellitto).

In desperation he sounds off to call the ancient rulers back, and our Pevensies come hurtling back into Narnia. Lucy (Georgie Henley), Edmund (Skandar Keynes), Peter (William Moseley) and Susan (Anna Popplewell) are still children, though they quickly agree to fight a war for freedom and Caspian's place on the Telmarine throne. Throw into the fray at various moments are Narnian characters as diverse as a cranky dwarf and a throat-slitting wise-cracking mouse.

The throat-slitting part is important, by the way. It's a fairly violent film, with large doses of killing and maiming happening on screen, albeit in an adventure-movie, non-blood-spilling way. For a children's property, Narnia goes to really scary places this summer, which as it were, is mostly thanks to the slew of dark gritty fantasy action movies that have greeted us in the past few years.

Upping the ante on all the action, the dark gritty realism of war and the extremely impressive CGI also means that the film loses out on a lot of pacing. While it still moves along at an urgent speed, director Andrew Adamson cannot bring himself to pace the moments to service the characters. The art when to mount which scene and when to have character beats is something that is entirely missing from the film.

So while it's all fine having a rousing adventure tale with lots of action and a few jokes by a mouse, the stronger themes of the story and the film by extension are neglected, and the better moments remain on screen as husks of what they should have been. Without the proper character beats, moments of humility and grace feel vacuous and shallow.

A movie trying this relentlessly to be epic can only mean one thing for us - a tread into Pirates Of The Caribbean territory. The entire film is a string of high adrenaline moments, rousing music and much clashing of swords. This also leads to the kind of bloat we have seen with movies that have caught this brand of sequel-itis: true to fashion, the film is a lot more than two hours running time.

Despite the things that go wrong, Prince Caspian is still entertaining on its own, and has a sense of immediacy to its action, which is mostly thanks to the way they have been staged. Rather than ape a more antiseptic style of action choreography, Adamson mounts his action on a more clean, old-school slate, making it work better than most I have seen in fantasy films.

It may have its flaws, and it may not be as good as the first, but The Chronicles of Narnia: Prince Caspian is definitely good times at the movies. It may not be as smart as Iron Man, or as fun as Ultimatum, but it's definitely a decent summer actioner, and one you can take your children to.
Share. Save. Connect.
Tweet
THE CHRONICLES OF NARNIA... SNAPSHOT
THE CHRONICLES OF NARNIA - PRINCE CASPIAN (HINDI) SNAPSHOT

ADVERTISEMENT
This page was tagged for
narnia movie hindi
the chronicles of narnia prince caspian hindi movie
The Chronicles Of Narnia Prince Caspian online move in hindi
movie me.com Narnia prince in hindi
the narnia movie hindi
Follow @fullhyderabad
Follow fullhyd.com on
About Hyderabad
The Hyderabad Community
Improve fullhyd.com
More
Our Other Local Guides
Our other sites
© Copyright 1999-2009 LRR Technologies (Hyderabad), Pvt Ltd. All rights reserved. fullhyd, fullhyderabad, Welcome To The Neighbourhood are trademarks of LRR Technologies (Hyderabad) Pvt Ltd. The textual, graphic, audio and audiovisual material in this site is protected by copyright law. You may not copy, distribute, or use this material except as necessary for your personal, non-commercial use. Any trademarks are the properties of their respective owners. More on Hyderabad, India. Jobs in Hyderabad.