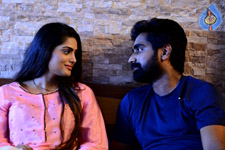 Anil Bandhakavi / fullhyd.com
EDITOR RATING
3.0
Performances
Script
Music/Soundtrack
Visuals
3.0
2.0
4.0
5.0
Suggestions
Can watch again
No
Good for kids
No
Good for dates
No
Wait to rent it
No
When a horror film fails to tingle the spine, it finds itself at a dead-end in terms of entertainment value. April 28th Em Jarigindi, directed by Veera Swamy Ganamala, quickly goes wayward after starting with the slightest level of promise, and sends you down a path that leads to more climactic disappointments.

Vihari (Raja Ranjith Elchuri) is a movie scriptwriter who is struggling to generate good ideas for a new pitch. Hoping that a change of scenery will help with new ideas, he decides to take a road trip along with his wife Pravallika (Sherry Agarwal) and his kids.

On the way they run into a police inspector (Ajay) who befriends them and recommends a quaint little town (Siripuram) that will be great for a short stay with the family. There, Vihari comes across an abandoned home and requests access to stay there. The inspector warns him that the place is known to be haunted, but Vihari is still enthusiastic hoping that it will help him with ideas.

April 28th Em Jarigindi is one of those movies in which the ending is completely unexpected but is also a total letdown. It's as though the writers created a concept but didn't know where to take the story, and the denouement makes it look like the writers made a half-hearted attempt to also quickly address the issues of sexual harassment and bullying. Also, a lot of time in the film is spent creating spooky anticipation that something is about to happen, with nothing eventually happening - it's as though they used those sequences as a filler for time.

For comic relief, Chammak Chandra's character is thrown into the mix as the front desk attendant of the hotel where Vihari and family spend their first night in town. He intermittently appears throughout the movie trying to compulsively figure out where he went wrong with a card trick that he tried to pull on Vihari, in a role that turns out to be more disturbing than relieving.

Although the story more or less ties in, with only a couple of trivial loose ends, there are instances like when Vihari and his family first encounter another presence in the home, he complains to the police officer that he was not told about the house being haunted. Also, at this point the film sort of turns into a comedy, because not too much time back in the movie Vihari is all cool about how a haunted house would help with his writing.

When the story seems to lack creative desire, it will be a little unfair to comment on performances, but the performances do not really give the film a boost, either. Some of the performances are also outright comical - possibly potential auditions for future moviemakers to spot talent. The cinematography is average, too. To the editor's credit, all of these are finally stitched together to create at least a watchable end product. 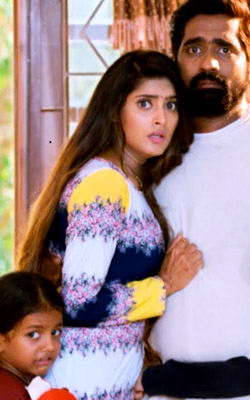 ADVERTISEMENT
This page was tagged for
April 28th Em Jarigindi telugu movie
April 28th Em Jarigindi reviews
release date
Raja Ranjith Elchuri, Sherry Agarwal
theatres list
Follow @fullhyderabad
Follow fullhyd.com on
About Hyderabad
The Hyderabad Community
Improve fullhyd.com
More
Our Other Local Guides
Our other sites
© Copyright 1999-2009 LRR Technologies (Hyderabad), Pvt Ltd. All rights reserved. fullhyd, fullhyderabad, Welcome To The Neighbourhood are trademarks of LRR Technologies (Hyderabad) Pvt Ltd. The textual, graphic, audio and audiovisual material in this site is protected by copyright law. You may not copy, distribute, or use this material except as necessary for your personal, non-commercial use. Any trademarks are the properties of their respective owners. More on Hyderabad, India. Jobs in Hyderabad.