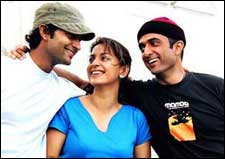 Ghazala Rizvi / fullhyd.com
EDITOR RATING
7.0
Performances
Script
Music/Soundtrack
Visuals
NA
NA
NA
NA
Suggestions
Can watch again
NA
Good for kids
NA
Good for dates
NA
Wait to rent it
NA
My Brother Nikhil is a film about the flimsy hold that we have over our life, the fragility of everything that we boast to possess, be it our relationships or our achievements. Without being overly preachy or judgmental, the movie makes a good viewing for all.

Nikhil Kapoor is the state swimming champion of Goa. He has everything in his favor - good looks, fame, and a family that dotes on him. Navin Kapoor (Victor Banerjee) is the proud father who guides his son through the seas of competition. Mother Anita Rosario Kapoor (Lilette Dubey) and sister Anamika (Juhi Chawala) groove on him.

The Kapoors’ life revolves around the jovial and charming Nikhil. After coaching him into winning the scholarship from the Sports Ministry, Navin’s ambitions are further expanded.

Nikhil is caught unawares when his routine medical checkup declares that he is HIV positive. The news conflagrates the peace of the local community. Not only do the people start shunning him and his family, the police confine him in a TB sanitarium under a Goa Public Health Act. Deserted by his friends and parents, Nikhil grapples to save his sanity.

Abuse and humiliation run amuck even after Lawyer Anjali (Shweta Kwatra) wins back his constitutional freedom. Nikhil’s employer sacks him for being HIV positive because everyone in the office is petrified. His parents leave for Mumbai not wanting to abet their child’s crime. For crime was what it was interpreted as during the 1980s.

In all his tribulations, sister Anamika, or Anna as he calls her, stands by him to buttress against the tides that he can no longer ride on. Along with his friend Nigel (Poorab), Anna starts a massive campaign of awareness and respite for HIV positive people. Their efforts culminate into the setting up of Positive People, an organization that offers support to such patients.

Torn between the pain of broken hopes and social disgrace, and love for their child, unlike Anamika, Nikhil’s parents side with cowardice. Acknowledgement comes slow and too late from his parents, who, till the end, don’t figure out their feelings and reactions.

My Brother Nikhil is an impressive directorial debut by Onir. The story line is precise and acute without unnecessarily digressing into any debates. The film touches upon issues like homosexuality without wandering much from the main theme. It also opens up the closet upon parents who invest their time and energy thinking of their children as Fixed Deposits, so that one day they can bask in the returns of their offspring’s achievements and glory.

Supported by Shaan’s ardent singing, the movie presents many instances of nostalgia about lost past and unseen future. The only handicap that the movie has is the less than average performances even by seasoned actors like Lillete Dubey and Victor Banerjee. Even Juhi Chawala, with all her charm, cannot emote the right feelings on screen.

Sanjay Suri does a commendable job with his transformation from a vibrant youngster to a disgraced HIV patient seeking acceptance and the fundamental right to co-exist. The film lacks chemistry at the individual characters’ level, and many scenes, which were written to bewail the audience, come a cropper during the execution.
Share. Save. Connect.
Tweet
MY BROTHER NIKHIL SNAPSHOT

ADVERTISEMENT
This page was tagged for
My Brother Nikhil hindi movie
My Brother Nikhil reviews
release date
Sanjay Suri, Juhi Chawla
theatres list
Follow @fullhyderabad
Follow fullhyd.com on
About Hyderabad
The Hyderabad Community
Improve fullhyd.com
More
Our Other Local Guides
Our other sites
© Copyright 1999-2009 LRR Technologies (Hyderabad), Pvt Ltd. All rights reserved. fullhyd, fullhyderabad, Welcome To The Neighbourhood are trademarks of LRR Technologies (Hyderabad) Pvt Ltd. The textual, graphic, audio and audiovisual material in this site is protected by copyright law. You may not copy, distribute, or use this material except as necessary for your personal, non-commercial use. Any trademarks are the properties of their respective owners. More on Hyderabad, India. Jobs in Hyderabad.