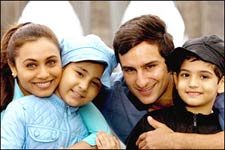 Naveen Yellamati / fullhyd.com
EDITOR RATING
5.0
Performances
Script
Music/Soundtrack
Visuals
5.0
4.0
7.0
6.0
Suggestions
Can watch again
No
Good for kids
Yes
Good for dates
Yes
Wait for OTT
Yes
Any product tastes scrumptious only if the recipe is great. And the recipe is what is amiss in Thoda Pyaar Thoda Magic, that takes off with weak and shallow screen-writing amalgamated with a cliched storyline of yore. The movie may yet appeal to the average Bollywood fanatic with its music and predictable proceedings. The gaping hole, however, remains its below par screenplay, replete with mismatched portrayals of characters and unnatural schmaltz.

The story obviously is cut and paste in bits and pieces (like many of its kissing Bolly cousins) from such flicks as Splash and Mary Poppins, where mermaids / magic nannies capture the screen presence with their magnetic aura, holding the movie delicately on tenterhooks, adding life-like radiance to the entire role and movie. For a film loosely based on similar lines, Rani's character is the eddy that whirls the water. When this eddy is non-present, there's no whirl.

And, whirl and flow is what is lacking in the movie as Rani proves to be a mismatch for the role - and no, we are not comparing her to a Daryl Hannah or a Julie Andrews, but there is a vacuosity to her portrayal, be it the dorky outfits she comes with, her shallow expressions, or her empty grin.

Here's the set-up: Ranbir (Saif Ali Khan), a very business-minded, poker-faced workaholic mogul for whom life is just another day at the office, recklessly rams into an ongoing car instantly killing a couple. The muscle of money ensures that our power tycoon manages to stay away from jail while trying to prolong the case, and the couple's young children are left to themselves.

After much media hullabaloo, the case comes to a closure with the judge (Sharat Saxena) giving an out-of-the-box adjudication: the defendant is ordered to be the legal guardian of the mischievous but unfortunate brats, much to his chagrin.

The ruling also has it that Ranbir cannot leave the kids at home and leave town, and to pile on further agony, there will be periodic inspections and appraisals from the judge, and should the feedback from the kids be anything other than positive, Ranbir will go behind the bars. In essence, he has to keep the kids happy at all times.

The four kids, fresh from the seething wounds inflicted by Ranbir, think of taking this opportunity to avenge the deaths of their parents. So right from day 1, the juvenile pranksters make life miserable for the grumpy guardian, be it occupying his swank washrooms, blowing up his home computer, or tanking a lucrative business deal. And Ranbir is forced to stay composed as any slur against the kids will invite court's attention. Compounding Ranbir's predicament is his skimpily-clad, scantily-brained bumpkin of a flame Malaika (Ameesha - formerly Amisha - Patel).

Looking at all this earthly snafu, the Almighty (Rishi Kapoor), nesting in the clouds, sends down a fantasmal fairy, Geeta (Rani Mukherjee), on a mission to planet Earth. A mission of injecting happiness back into both parties' lives by uniting Ranbir and the kids. She enters the Ranbir household as a nanny for the brat pack.

Following this is the typical Yashraj filmi plot of artifical yet musical feelgood and at times hyper-emotional sentiments. The ending happens in la la land (Los Angeles) that all the gang go to along with Ranbir for an all-important business trip of his.

Rani's acting is fairly fairy, and maybe other roles (and outfits) would have suited her better. Saif is at times effortless, but mostly affected in his portrayal of Ranbir. The kids are a fun lot to watch, all of them, be it in their mischief or melancholy. All of the tots are newbies except for the little one from Paanchvi Pass (Shriya, who plays Aditi's role). Razzaq Khan is ever-quiet, but is a comic to the core.

Music has always been the forte of Yashraj products, and this one is no exception - the tunes are mellifluous and catchy, with the intermittent humming of Shankar Mahadevan in the background. The music belted out by the tactful trio of Shankar-Ehsaan-Loy is one of the few pluses of the flick.

Kunal Kohli fared way better with his previous projects like Hum Tum and Fanaa, but flunks with this one. Thoda Pyaar Thoda Magic is not a magical kid flick, not even a technical masterpiece. But thankfully, the kids give a refreshing feel to the movie. And while it has a sub-par screenplay and an ethereal storyline, it also has some slick graphics and animation, some schmaltz, a romcom ambience, and of course, a predictable happy ending.

Decent for families, enjoyable for the kids, not too hard on your head, and generally feel good. If you consider yourself rather discerning, however, stay away.
Share. Save. Connect.
Tweet
THODA PYAAR THODA MAGIC SNAPSHOT

A depressingly bad movie, Thoda Pyaar Thoda Magic has no raison d’être except some dodos in Mumbai fancy that if the likes of Ram Gopal Varma can make bad movies, hey, they can make worse movies.

This movie falls way, way short of delivering on its cute title that we feel compelled to describe it in the rest of this review by the more apposite Zyada Garbage, Zero Magic.

ADVERTISEMENT
This page was tagged for
thoda pyaar thoda magic dual audio english hindi
thoda pyaar thoda magic full movie normal print
thoda pyaar thoda magic full movie
Thoda Pyaar Thoda Magic hindi movie
Thoda Pyaar Thoda Magic reviews
Follow @fullhyderabad
Follow fullhyd.com on
About Hyderabad
The Hyderabad Community
Improve fullhyd.com
More
Our Other Local Guides
Our other sites
© Copyright 1999-2009 LRR Technologies (Hyderabad), Pvt Ltd. All rights reserved. fullhyd, fullhyderabad, Welcome To The Neighbourhood are trademarks of LRR Technologies (Hyderabad) Pvt Ltd. The textual, graphic, audio and audiovisual material in this site is protected by copyright law. You may not copy, distribute, or use this material except as necessary for your personal, non-commercial use. Any trademarks are the properties of their respective owners. More on Hyderabad, India. Jobs in Hyderabad.