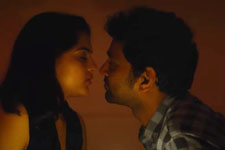 Sai Tulasi Neppali / fullhyd.com
EDITOR RATING
7.0
Performances
Script
Music/Soundtrack
Visuals
8.0
7.0
7.5
7.0
Suggestions
Can watch again
Yes
Good for kids
No
Good for dates
No
Wait for OTT
Yes
Horror gets the stepchild treatment in Tollywood cinema. Just a handful of scary movies make it to the Big Screen in a year. Pure horror is even rarer, with the genre often mellowed by comedy (as in Raju Gari Gadhi) or spiritual symbolism (Chandramukhi). Not Masooda, though. Jam-packed with jumpscares and mindless violence, Masooda is an unfiltered scare-fest for fans of the genre.

Masooda's story begins in a most beguiling manner - almost like a sweet, middle-class drama. Single mother Neelam (Sangeetha Krish) is struggling to make ends meet for herself and her daughter Faziya. They scrape by thanks to the generosity of the people around them - in particular, that of their neighbour Gopi (Thiruveer),?a shy guy with a heart of gold. For a while, their troubles seem exceedingly bourgeois: Neelam can't make rent; Faziya is not doing so well in school; and Gopi can't muster the courage to ask his office crush, Minnie (Kavya Kalyanram), out on a date. Until one night, their lives turn into a nightmare.

Neelam finds Faziya in a demented trance, staring at the wall, spewing hateful threats. In a word, Faziya is possessed. After trying conventional methods (doctors, MRIs, medicines) to heal her, Neelam and Gopi turn to an exorcist. There in the musty halls of a Pir Baba's bungalow, they learn about an evil spirit - named Masooda - that has taken hold of the teenager. And they set out on a mission to rid her of it.

Throughout the film, whether in a makeout scene between Gopi and Minnie, or in a gory shot showing a blood sacrifice, or in all the myriad of spine-chilling sequences, there is a feeling that a deft, experienced hand is at the helm. Imagine my surprise at learning that Masooda is writer-director Sai Kiran's debut feature.

Kiran's characters are real, flawed, and rich in detail. In just a few exchanged glances, we are able to glimpse their inner worlds - like the sisterly love Faziya shares with Gopi, or the secret crush she harbours for their landlord's son. Even the secondary characters are given unique physical traits - such as Pir Baba (played by Sudhakar) being partially-deaf or his accomplice constantly sniffling - for a bit of depth.

The most notable character, however, is the antagonist - the evil spirit Masooda whom we know very little about. We see her only from a distance, committing unspeakable acts of horror. Hidden behind a burqa, she is a mystery. Perhaps it was Kiran's deliberate choice to keep her alienated from the audience, in stark contrast to wanting sympathy evoked for Faziya, Gopi and Neelam.

But the script's slow and deliberate pace of character development that initially draws you in, is also the cross that it dies on. There are two montage songs that add nothing new to the story, and one too many scenes about Gopi's flailing love life. The 45-minute finale which has only ten minutes worth of truly terrifying moments is a clear example of the screenplay's excessive flab.

A lot can be forgiven, though, for the casting is terrific. Thiruveer makes a big impression as Gopi, the meek and socially-awkward guy capable of sudden acts of bravery. Thiruveer plays the unlikely hero as assuredly as if the role were written solely for him. Sangeetha is the other acting powerhouse of the movie, playing the clueless but determined Neelam. It is a testament to the strength of the direction and writing that Sangeetha and Thiruveer - two actors that wouldn't be considered "lead material" for conventional movies - ?have created one of the most memorable pairings of the year.

Ultimately, there is only one litmus test for a horror movie: does it scare you? The answer is yes. The movie pulls out every trick in the bag to deliver on this, and there isn't a horror cliché that hasn't made its way into Masooda. Women in flowing white robes? Yes. Girl on a rusty swing? Yes. Demonic voices whispered in seedy hallways? Yes. Flickering lights? Yes. Rivers of blood and plenty of gore? Yes. Jumpscares featuring popped balloons and shrill kitties? Yes and Yes. There are even lots of spiritual references - amulets and holy daggers - without the film explicitly stepping down a rabbit hole of religion. And all of these scenes come alive with Nagesh Banell's artfully-lit cinematography and Prashanth Vihari's chilling background score.

But the dragging finale, as all the creepy sounds crescendo and the eerie visuals saturate the screen, is ironically the least scary - a bit like touring the same Haunted House for the fifth time, knowing fully well that the "blood" is tomato ketchup, the axes are made of cardboard, and the "ghosts" are teenagers in costumes.
Share. Save. Connect.
Tweet
MASOODA SNAPSHOT 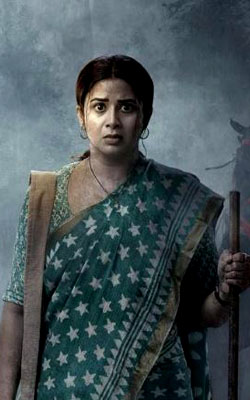 See Masooda full details
MASOODA USER REVIEWS
1 - 1 OF 1 COMMENTS
POSITIVE  |  NEGATIVE |  NEWEST  |  OLDEST  |  MOST HELPFUL  |  LEAST HELPFUL
raghuncs@gmail.com on 12th Dec 2022, 9:09am | Permalink
"But the dragging finale, as all the creepy sounds crescendo and the eerie visuals saturate the screen, is ironically the least scary - a bit like touring the same Haunted House for the fifth time, knowing fully well that the "blood" is tomato ketchup, the axes are made of cardboard, and the "ghosts" are teenagers in costumes". You just read my mind :)

ADVERTISEMENT
This page was tagged for
Masooda telugu movie
Masooda reviews
release date
Sangeetha Krish, Thiruveer
theatres list
Follow @fullhyderabad
Follow fullhyd.com on
About Hyderabad
The Hyderabad Community
Improve fullhyd.com
More
Our Other Local Guides
Our other sites
© Copyright 1999-2009 LRR Technologies (Hyderabad), Pvt Ltd. All rights reserved. fullhyd, fullhyderabad, Welcome To The Neighbourhood are trademarks of LRR Technologies (Hyderabad) Pvt Ltd. The textual, graphic, audio and audiovisual material in this site is protected by copyright law. You may not copy, distribute, or use this material except as necessary for your personal, non-commercial use. Any trademarks are the properties of their respective owners. More on Hyderabad, India. Jobs in Hyderabad.