Swaroop Thotada / fullhyd.com
EDITOR RATING
4.0
Performances
Script
Music/Soundtrack
Visuals
5.0
3.0
3.0
5.0
Suggestions
Can watch again
No
Good for kids
No
Good for dates
No
Wait to rent it
Yes
So how many permutations and combinations are possible with three items? We ask because it might answer the question, how many more assembly-line "comedies" of this sort are we going to get from Sunil. The guy appears to be surviving on only three facial expressions: the clueless innocent man, the melodramatic middle class bore and the witty one-liner vending machine. Take any random clip from any of his films (except Appalaraju), and his emoting can most possibly be filed under one of those three categories.

We are talking about an actor who, a decade back, was noted for generating chuckles even with the lamest of lines, solely with his versatile expressions. So we cannot afford to go so far and call him a bad actor, but this definitely is bad acting. Not because it is inaccurate, but because it is inefficient. Inefficient in bringing laughs, when that continues to be the biggest expectation from him.

Eedu Gold Ehe is a story that could have suited almost anyone else other than Sunil better, and would have bombed irrespective of who did it. The tale owes a blanket thank you to the dozens of '90s Bollywood and south dramas which in turn owe their success to probably anything else except their plots.

So Bangarraju (Sunil) piggybacks on bad luck with a fervent persistence, and his fate dictates that whoever hires him burns to the ground at the drop of a hat (a fate quite likely to extend to even the producer of this film). Having realised this after three wretched comedians suffer his calamitous presence and the audiences suffer two desperate attempts at humour, Bangarraju decides it's time to wreck the rest of the film.

So he runs into an "Amma" (Jayasudha, not Jayalalitha) and saves her from goons, only to subject her to something even worse: his sentimental rants. But Amma fights back. Having known that a thorn can be pulled out only by another, she goes several steps ahead, adopting him and calling him "Peddoda". It is surprising that the film doesn't have a scene where she tucks him in bed and kisses him good night.

Meanwhile there is a robbery of some Photoshopped golden statues of Laughing Buddha and no less than 900 crores are at stake, which enables the plot to throw in mistaken identity, double crossings, bizarre twists and high voltage fights all handled with the deftness of a rickshaw puller trying to make a Skype call. The movie teases you with the possibility of another Sunil called Sunil Varma ,but you don't care anymore after being battered down by the blunt ends of the rhyming one-liners.

Richa Panai and Sushma Raj have nothing to do and not much to wear. It is surprising that Jayasudha hasn't yet given up doing these cardboard characters out of nauseating monotony. Shakalaka Shankar, Prudhvi and Vennela Kishore are the only ones among the battalion of comedians who manage to bring in a chuckle or two. Naresh, as always, is lovable, but Puneet Issar is the epitome of overacting. And the music and cinematography make the script look comparatively better.

The audiences cheered for Sunil beating up the bad guys in Poolarangadu because it was new that time. It's hard to keep seeing that, and this film dishes it out in oodles. Sunil might think that he is being reasonable by simply picking the underdog characters. Yes, we are always ready to root for the underdog, but emotional manipulation doesn't always work, especially when it is this ham-handed. It's high time these script writers realized that.
Share. Save. Connect.
Tweet
EEDU GOLD EHE SNAPSHOT 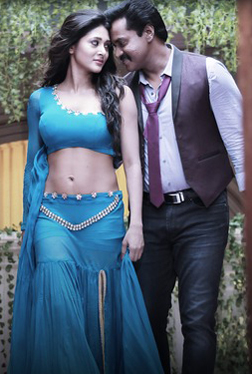 ADVERTISEMENT
This page was tagged for
eedu gold ehe Telugu movie movie rules
Eedu Gold Ehe telugu movie
Eedu Gold Ehe reviews
release date
Sunil Varma, Richa Panai
Follow @fullhyderabad
Follow fullhyd.com on
About Hyderabad
The Hyderabad Community
Improve fullhyd.com
More
Our Other Local Guides
Our other sites
© Copyright 1999-2009 LRR Technologies (Hyderabad), Pvt Ltd. All rights reserved. fullhyd, fullhyderabad, Welcome To The Neighbourhood are trademarks of LRR Technologies (Hyderabad) Pvt Ltd. The textual, graphic, audio and audiovisual material in this site is protected by copyright law. You may not copy, distribute, or use this material except as necessary for your personal, non-commercial use. Any trademarks are the properties of their respective owners. More on Hyderabad, India. Jobs in Hyderabad.