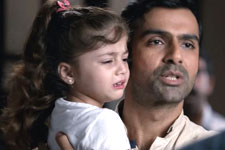 T J Reddy / fullhyd.com
EDITOR RATING
3.0
Performances
Script
Music/Soundtrack
Visuals
4.0
2.0
3.0
5.0
Suggestions
Can watch again
No
Good for kids
No
Good for dates
No
Wait for OTT
Yes
Nirdosh was better when it was directed by Abhay Chopra, came out in 2017, starred Akshaye Khanna, Siddharth Malhotra and Sonakshi Sinha, and was called Ittefaq.

Directed by the duo of Subroto Paul (not the football player) and Pradeep Rangwani, Nirdosh follows police inspector Lokhande (Arbaaz Khan) as he tries to solve a murder mystery which seemingly has only one suspect, Shinaya Grover (Manjari Phadnis). As his brand of investigation gets underway, a few more suspects come out of the woodwork and put his skills to the test. Lokhande and his team have three days to either find the killer or prove Shinaya's guilt before the latter is exonerated in court. The investigation and the many versions of the actual events narrated by the witnesses and suspects form the rest of the film.

The reason that Nirdosh is not as good as Ittefaq can be traced back to what the lead investigator's name signifies to the story on a whole. Where Akshaye Khanna's Dev was most likely named as such because he played judge, jury, executioner and moral centre in his story, Arbaaz Khan's Lokhande is named as such just to facilitate a cheap punchline which goes, "Jo police ki dande se seedhe nahi hote, usko Lokhande seede karta hai".

The gulf in class is both painful and palpable.

The above example serves as a reminder for how Nirdosh takes many clever ideas, and pulls the clever right of them and replaces them with voluptuous babes, exploitative scenes, a general lack of tension, adultery, blackmail, sex tapes, political jargon and so much more. What needed to be a tight, taut, intelligent thriller slowly morphs into an over two-hour episode of CID.

Rest assured, we at fullhyd.com don't compare films to CID lightly. This movie warrants it for a myriad of reasons. Arbaaz Khan's Inspector Lokhande states the obvious, uses his fists before his brains, and has a bevy of poorly written one-liners. The movie rarely allows Khan to explore his range as an actor, and instead chooses to have him talk with a the look of Frankenstein's monster on his face and an equally flat monotone to boot.

Just as the star the film is resting on has no hope of essaying a full-fledged character, his team of cops gets little in terms of scraps to feed on. Lokhande comes with a female Daya who doesn't break doors and a male Abhijeet who is so bone-headed that he is primarily used to spin his baton around and beat criminals to a pulp with his patented bone-head. The fact is neither of them is either funny or in any way memorable.

Trying hard to infuse some semblance of drama into the movie is Manjari Phadnis. She seems to be the only one who gives a damn among a sea of actors who know this film and its story are well below their pay grade. Phadnis' performance might border on overacting from time to time, but her professionalism is one to be commended.

Her co-stars Ashmit Patel who plays Shinaya's husband Gautam Grover and Mahek Chahal who plays paying guest Adah are square pegs the director tries to fit into round holes - they are woefully underprepared to match what Phadnis is bringing to the table, and are hence exposed in every scene they share.

There are also a watchman, an apartment secretary, a lift operator, Mukul Dev's Rana, his wife, her brother and their maid whose only purpose seems to be to hoodwink the audience into thinking that the film is cleverer than it actually is. In its dying embers, the film attempts to take a page out of The Prestige's book by showing the audience that the correct answers were there all along while patting itself on the back thinking it successfully diverted their attention from the actual culprit. The problem is, this is quite likely not your first thriller/mystery. The movie's characters may be dumbfounded by the events unfolding in front of them, but many in the theatre are not.

The film does not have a great score/soundtrack or an eye-grabbing visual style about it to distract you from its plot-hole-filled mediocre story-telling. Its song choreography is reminiscent of Emraan Hashmi's heyday where a song primarily consisted of shoulder kissing and PG-13 nudity. And its story and presentation reek of functionality in place of originality, just like with CID. But unlike CID, the movie does not have a sense of humour about its many flaws.

With so many moving parts, the writers tangle themselves in plot threads until they have only way out of the mess. In their desperation, they resort to the age-old narrative device of having an omniscient main character. But this reveal begs the question, "Why does he need to investigate the murder and be surprised by every new development when he knew the answers all along?"

When a film fails to justify its own existence, you know it's in trouble.
Share. Save. Connect.
Tweet
NIRDOSH SNAPSHOT 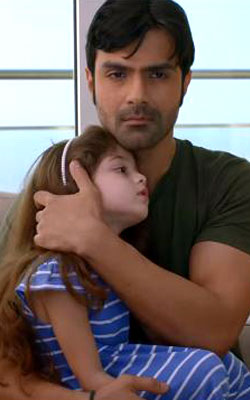 ADVERTISEMENT
This page was tagged for
Nirdosh hindi movie
Nirdosh reviews
release date
Arbaaz Khan, Manjari Fadnis
theatres list
Follow @fullhyderabad
Follow fullhyd.com on
About Hyderabad
The Hyderabad Community
Improve fullhyd.com
More
Our Other Local Guides
Our other sites
© Copyright 1999-2009 LRR Technologies (Hyderabad), Pvt Ltd. All rights reserved. fullhyd, fullhyderabad, Welcome To The Neighbourhood are trademarks of LRR Technologies (Hyderabad) Pvt Ltd. The textual, graphic, audio and audiovisual material in this site is protected by copyright law. You may not copy, distribute, or use this material except as necessary for your personal, non-commercial use. Any trademarks are the properties of their respective owners. More on Hyderabad, India. Jobs in Hyderabad.